Hartley Sawyer is, or was, a Hollywood actor. 35 years old with many credits, he had hit the big time, and big money, with a regular role on the CW series “The Flash.” He played the superhero “The Elongated Man.” Today he’s unemployed, and likely to remain so. He was fired from the series yesterday.

The first isn’t racist, or even legitimately offensive. To claim the second would be taboo in Hollywood is so ridiculous it boggles the mind. The third, described in various accounts as being about sexual assault, is an obvious joke. Saying you “date rape” yourself is not advocating sexual assault.

Never mind. In the crazed grip of George Floyd mania, people with empty lives and cruel dispositions are itching to show their power to destroy others by crying “Witch!,” knowing that most of those in authority, any authority, lack backbone, integrity or a working knowledge of the Golden Rule.

Hartley Sawyer groveled an apology on Instagram, saying in part,

“My words, irrelevant of being meant with an intent of humor, were hurtful, and unacceptable. I am ashamed I was capable of these really horrible attempts to get attention at that time. I regret them deeply. This was not acceptable behavior. These were words I threw out at the time with no thought or recognition of the harm my words could do, and now have done today.”

Big mistake. He should have said,

“I’m not going to apologize for silly tweets I made years ago because they weren’t intended to do any harm and didn’t do any harm. How I chose at the time to banter with friends who knew me and could tell when I was being intentionally ironic or outrageous is no reflection on me as a professional, a colleague, a friend, a citizen or a human being today, but those who would attempt to harm my career and reputation based on those tweets is a reflection on them, and an ugly one.  I will not enable the wave of social bullying and mandated thought control currently poisoning the nation by  capitulating to it. I choose to be judged on my conduct now, not based on casual words typed in haste many years ago.”

That would have at least sparked a productive discussion, and earned respect from people who are worth  being respected by. Now all he has is pity.

“Hartley Sawyer will not be returning for season seven of The Flash,” reads a statement from The CW, producers Warner Bros. TV and Berlanti Productions and executive producer Eric Wallace. “In regards to Mr. Sawyer’s posts on social media, we do not tolerate derogatory remarks that target any race, ethnicity, national origin, gender, or sexual orientation. Such remarks are antithetical to our values and polices, which strive and evolve to promote a safe, inclusive and productive environment for our workforce.”

Wallace issued his own grandstanding statement, which the star of  “The Flash” simply published on Instagram under his own name. Gutsy. 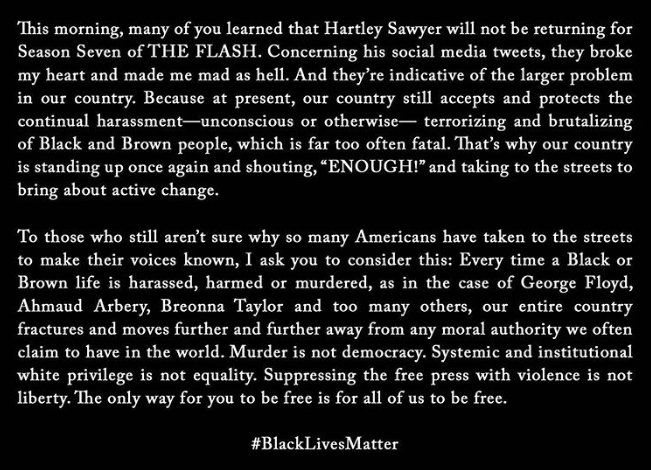 Yeah, the tweets are indicative of a problem, the problem being that there is a vicious mob of lock-step ideologues determine to terrorize Americans out of diversity of thought, expression, speech and opinion. Who of sound mind gets “angry” about six year old social media tweets? What does mocking Al Sharpton have to do with “brutalizing” black and brown people? The issue with Al Sharpton isn’t his race, its his hucksterism, his scams, and his occupation as a professional race-baiter and shakedown artist.

My late friend Bob McElwaine, the Hollywood publicist, was a loyal Democrat and liberal who was blacklisted in the Forties.  He was denied work because he had briefly joined a veteran’s organization years earlier that had been falsely labeled as left-wing by conservative elements in the American Legion. Bob was good-natured about his misfortune, but regarded the support Republicans gave to red-baiting efforts by the House Un-American Activities Committee and later by Joe McCarthy as an unforgivable betrayal of American liberty.

I wonder how he’d feel about what has happened to Hartley Sawyer.

I think I know.

Addendum: I just read a post on this same topic by conservative writer Jim Treacher. It concludes,

Better not mock or criticize the people you’re not supposed to. They’re the victims, and they own you.