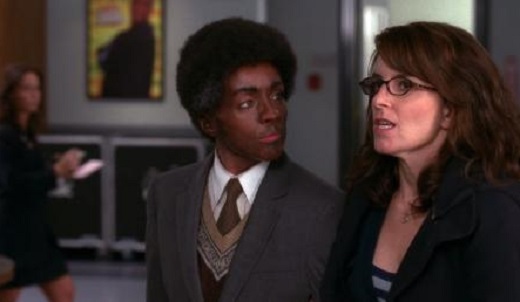 The Kennedy Center embarrassed itself in 2010, giving an affirmative action (gender division) honor to Tina Fey. She received its Mark Twain Prize for American Humor, which the Center has awarded every year since 1998 to individuals who have “had an impact on American society in ways similar to” Twain…you know, like Tina Fey.

The Center realized that it was short on female honorees (because humor, historically and now, is a field dominated by men), and because it can only give the award to the living, so it settled on Fey as a weaker than weak addition to the pantheon. I compared the award at the time to Obama winning the Nobel Peace Prize and added,

If she vanished tomorrow, Tina Fey would at best be a footnote in the history of American comedy. Her qualifications for the Mark Twain Prize in 2010 appear to be 1) she is a woman, and there aren’t many women in comedy 2) she is a comedian, though not an especially funny one, 3) she is a writer, though neither of the screenplays she has authored would be called deathless classics, unless you think “Mean Girls” is on par with “Adam’s Rib,” and 4) she looks like Sarah Palin, which allowed her to do a popular impression mocking Palin during the 2008 campaign, and the people who give out the award really, really dislike Sarah Palin.

In short, she didn’t deserve the award in the first place, and the Mark Twain Prize lost its integrity and credibility by her receiving it. Thus there is some condign justice in that decision coming back to bite the Kennedy Center now, along with a second bad decision eight years later.

That year, the Kennedy Center decided to rescind Bill Cosby’s Mark Twain Prize, which the Cos had more than earned in 2009. Cosby did have impact on culture and humor comparable to Twain, and his achievements dwarf those of Fey like “War and Peace” dwarfs “Valley of the Dolls.” Again virtue-signaling to feminists, the Kennedy Center revoked Cosby’s honor after his conviction for sexual assault (which was just accepted for appeal this week).

I didn’t write about it at the time, I guess because there was nothing new to say that I hadn’t said in this post, where I observed,

[L]ast I heard Bill Cosby was still recognized as a major trailblazer in stand-up, TV comedy, and television integration (remember “I Spy”?), an important positive cultural force for race relations and black community self esteem, and a spectacularly talented comedian with a unique voice and presence. None of that has changed. Those were the achievements that prompted Cosby’s bust’s inclusion in Disney’s Academy of Television Arts and Sciences Hall of Fame Plaza, along with celebrities such as Lucille Ball and Oprah Winfrey who, like the Cos, have been inducted into the Television Academy Hall of Fame. O.J. Simpson is still honored in the College Football Hall of Fame, because he was one of the greatest college stars ever. His post-career hobby as a murderer, like Bill’s extra-curricular activities as a serial rapist, have nothing to do with the honor, just as Cosby earned and still deserves, his honor for what he achieved on stage and screen.

But Bill was deemed unworthy nonetheless. Now, in the midst of the George Floyd Freakout, the frenzied statue-toppling, cancelling-happy, race-offense vengeance-obsessed mob has targeted Tina Fey. During her acclaimed NBC show “30 Rock,” which she created, often wrote, and appeared in, blackface was used for comic effect four times. This week, always seeking to follow the crowd, Fey said her mea culpas and had Hulu pull the shows from circulation, thus putting herself in the cross hairs. (I must note that this censorship, like all censorship, impedes knowledge and reflection, since it is impossible to assess what the use of blackface was. I never watched the show because mega-ass Alec Baldwin was a regular, and I would prefer chewing off my fingers than supporting anything he’s involved in.)

She was foolish to draw attention to herself, because the mob wants heads, not apologies. Today a black group asked the Kennedy Center to rescind Fey’s prize.

“We are not trying to cancel Tina Fey. Tina Fey cancelled herself when she asked Hulu to purge offensive episodes of ’30 Rock,’ calling the fruits of her creativity ‘ugliness,’” the group said in a letter. “We are simply alerting the Kennedy Center — which has acted in the past to protect itself and the integrity of the Twain Prize — to do so again in light of Tina Fey’s admission.”

Hmmm...what could they be referring to with that stuff about protecting itself and the integrity of the Twain Prize? Oh, right!

The Kennedy Center is in ethics zugswang.

Cosby, a black man, was dishonored for being a proven and convicted sexual predator. Is drugging and raping women far, far more serious than using blackface in a comedy? Of course it is; for one thing, it’s a crime, and has always been a crime. In contrast, the use of black makeup (Fey is also accused of instigating “yellow-face” on another show) at a time when the practice was not regarded as taboo is a retroactive “crime” based on shifting political and social agendas.

I note with some satisfaction that the letter,  in addition to making my points about how Fey was a weak selection for the honor (It says,”Quite frankly, Ms. Fey’s receipt of the prize in 2010 put her in a class of comedians to which she was, and often still is, inferior…”) wields the Cosby precedent like an ax as it asks for Fey to be stripped of the prize:

“This, as you know, is an action that is not without precedent. The 2009 Twain Prize given to Bill Cosby was rescinded in 2018 due to his improprieties committed outside the field that the Kennedy Center leadership determined “overshadowed” his accomplishments. In this case, Ms. Fey’s missteps occurred within the field and thus directly reflect on the honor of the institution.”

The Ethics Alarms position is that neither Cosby nor Fey should lose their prizes, but how can the Kennedy Center allow Fey’s honor to stand after removing Cosby’s? For regardless of logic and common sense, nothing is regarded by the mob as worse than racism now. Nothing. And spineless leaders and administrators are expected to bolster that position. What Fey did is thus worse than what Cosby did—after all, he was only a serial rapist—and she committed her unpardonable sin  in the very field she was honored for!

As Moe was prone to say, “Trapped like a rat!”

It gets worse: Fay is white. If Cosby, a black man, is punished for lesser misconduct than Fey, the Mark Twain Prize becomes a per se accessory to systemic racism.

I won’t even get into the fact that Mark Twain liberally used racist language in some of his novels, or that if Cosby’s appeal is successful, the reason his prize was rescinded will no longer exist. Or even consider that if they take Fey’s prize back, they almost  have to rescind Billy Crystal’s as well, since he appeared in blackface on Saturday Night Live.

I can easily see a scenario where Crystal, Fey and Mark Twain are stripped of their honors, and Bill Cosby gets his back: right color, lesser offense.

Or so some think.

20 thoughts on “There Are Worse Things Than Racism, Part I: The Tina Fey Dilemma”