“So today, under the authority vested in me as President of the United States, I am announcing the creation of a new monument to the giants of our past. I am signing an executive order to establish the National [Garden] of American Heroes, a vast outdoor park that will feature the statues of the greatest Americans to ever live.”

Ugh. I winced when I read those words, and I’m sure I was not alone. Did the President just come up with that hare-brained idea on the spot? I hope so. I hope his staff is better than  to endorse or, worse, support such a terrible, half-baked idea. It is incompetent and irresponsible, and guaranteed to be divisive. Here are three unsolvable problems:

I. The project exposed itself as ill-planned and poorly conceived immediately. The initial list of “great Americans” looked as if it had been assembled by throwing darts at a poster, with someone coming in later to try to make politically correct additions. Here is the (incomprehensible) list, in alphabetical order:

To only mention some of the choices that make no sense: How can the first group include Douglas MacArthur, who was justly fired for insubordination by President Truman, rather than Dwight Eisenhower, who coordinated the victory over Hitler in Europe, or his boss, General George Marshall? Why would Dolly Madison make the cut, while two far more important First Ladies, Abigail Adams and Eleanor Roosevelt, be omitted? I am an admirer of Davy Crockett, but he didn’t do much of anything except create the model for media-hyped celebrities and manage to get himself killed at the Alamo. There are, oh, I’d say several hundred more substantial “great Americans,” including almost every President, than Davy. If there is going to be an inventors on the list, why only the Wright Brothers? Thomas Edison, Henry Ford, Steve Jobs and Alexander Graham Bell all were of equal importance.  Henry Clay’s naive compromises on slavery really did enable the slave trade. He’s a better choice than John C. Calhoun, but less deserving than Daniel Webster. Frank Sinatra? FRANK SINATRA? Ol’ mobbed-up Blue Eyes, leaving off Bing Crosby and Elvis, to name just two equally important pop singers? I’d have Sam Cooke, Buddy Holly, and Chuck Berry planted in the Garden before the likes of Sinatra. Meanwhile, why singers but no songwriters? Where’s Irving Berlin? Rodgers and Hammerstein? The Gershwins?  Hank Williams? Why singers but no dancers?

I know that the President doesn’t read, but the only author on the list is Stowe, and she’s only there because her book had such political and social significance (and I’ll bet my head that he’s never read her novel.) No Melville? Hawthorne? The Presidentdoesn’t go to plays either, but there are at least three playwrights everyone could agree on: O’Neill, Tennessee Williams, and Arthur Miller. You could justify adding Lillian Hellman and August Wilson for “diversity,” though both  are a notch below the top three.

Other diversity choices are embarrassingly transparent, and pure pandering. Amelia Earhardt, who is mostly remembered because she disappeared, but not Charles Lindberg? (I know, he was a Nazi sympathizer, but the Thomas Jefferson principle applies.) How about Jimmy Doolittle? Naming Christa McAuliffe is the worst kind of hero affirmative action: she was a woman, a teacher and she died in a national tragedy, but placing her before the real astronauts like Alan Shepard, John Glenn and Neil Armstrong makes the whole list look careless, amateurish, cynical  and arbitrary, which, of course, it is.

I could go on and would love to. (Where is Hamilton?) It’s a terrible list, but nicely characteristic of the careless, seat-of-the-pants manner in which this President handles everything.

2. The selection process is guaranteed to become a politicized, contentious, ugly mess, for reasons I shouldn’t have to elaborate upon. Already, there are complaints that the list is “mostly white men.” Well, of course it is: for most of our history non-white men had limited opportunities to excel, and women were relegated to subordinate status well into the 20th Century. Is the “Garden” going to recognize genuine achievements and importance, or employ lower standards meet affirmative action quotas?

3. It’s been tried before, and nobody cared. The Hall of Fame for Great Americans is an outdoor sculpture gallery located on the grounds of Bronx Community College  New York City. It was completed in 1900 with a grand  630-foot  colonnade (designed by Stanford White—where are the architects and builders that Trump boasted about in his speech?) exhibiting 98 bronze busts  of prominent Americans. It was the original Hall of Fame in the U.S., before baseball,s before any of them. No new busts have been added in decades, and most Americans don’t know the place exists. It is seldom visted and isfalling apart, but even without updating, the Hall’s list of members is better than what Trump proposed.

See Bell’s name in the photo above?

Then there was this variation, which I wrote about in May, “Presidents Park” in York County, Virginia, near Williamsburg. That10-acre park “featured a museum and a sculpture garden, and  visitors could walk among 43 huge concrete busts, each about 20 feet high and weighing as much as 22,000 pounds, of  the U.S. Presidents from George Washington to George W. Bush.” As with the Hall of Fame, nobody went to see it, nobody cared, and it ended up like this… 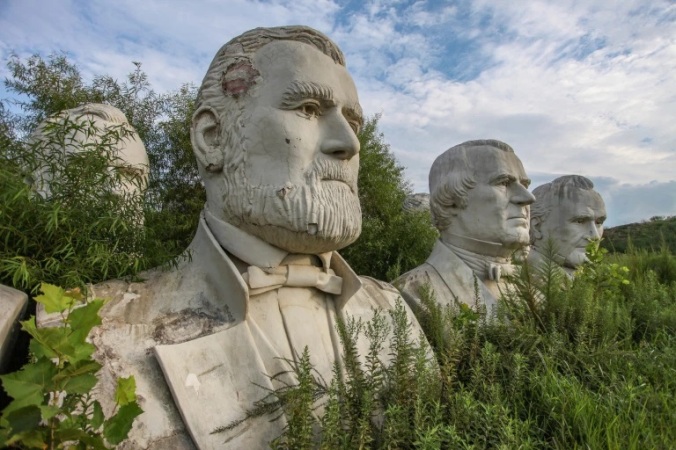 The President’s Garden is destined for a similar fate.

52 thoughts on “The President’s “National Garden of American Heroes” Is A Guaranteed Flop. Doesn’t Anyone Do Any Research Any More?”