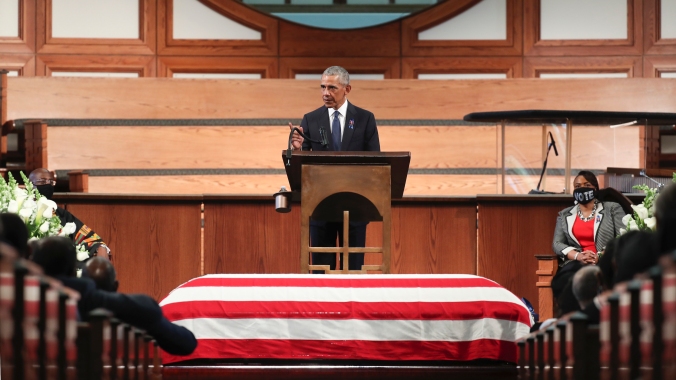 If Lewis were worthy of the exorbitant accolades heaped on his memory today and a true statesman, he would have reached out to the President, and used his stature in the black community to work with him. That would have benefited everyone. Instead, he decided to plant hate and fear, and cripple the President’s ability to lead.

He could not attend Lewis’s funeral, of course, and because he could not, he was, once again, prevented from being being President.

[As an aside, while I continue to be disgusted by his insistence on expressing every thought, no matter how ill-considered, that pops into his brain, the Lewis funeral reminds me of how horribly this President has been treated by his own country. The abuse and disrespect has been constant and unprecedented, unfair by any objective measure.  I respect Trump more now than I did when he was elected for his fortitude and resolve in the face of such hate.

I don’t know how he’s endured it, frankly. I don’t know if I could, and I’m a lifetime contrarian with my share of guts who regards quitting as a personal disgrace. He has a job he was elected to do, and he’s going to do it his way, no matter how  others, like Lewis try to hurt him. There’s not a lot about Donald Trump that I would point my son to as an example of how to be a man, but this is one aspect of his character that is admirable.]

Bush knew what a divisive fraud Lewis was, yet he participated in the sanctification of an ethics corrupter.

“Bull Connor may be gone, but today we witnessed with our own eyes police officers kneeling on the necks black Americans. George Wallace may be gone, but we can witness our federal government sending agents to use tear gas and batons against peaceful demonstrators.”

Barack Obama is an asshole.

A single police officer, acting on his own, engaged in a singular act of cruelty. There were no “police officers,” plural, kneeling on”necks.” Obama is tarring all police with the conduct of a rogue officer, and comparing the act to the racist commands of Bull Connor, when, as I have shown, there is no evidence that racism played any part in George Floyd’s death. And Obama is flat out lying about tear gas, and by calling the mobs trying to destroy a federal courthouse in Portland “peaceful.

His rhetoric was contemptible, though, to be fair, John Lewis would have approved.

19 thoughts on “Ethics Observations On The John Lewis Funeral”