One of the more depressing developments during the Post 2016 Election Ethics Train Wreck has been how virtually all of our professions have proven unable to remain objective and trustworthy, instead descending into bias and submitting to peer pressure—exactly the kind of behavior professionals are supposed to have the training and integrity to avoid. Journalists have been the worst in this respect of course, with politicians close behind. However, judges, lawyers, educators, academics, psychiatrists, health officials, performers and, yes, ethicists have also disgraced themselves, among others.

One persistent example of a corrupted profession is historians, and a useful measure of their ethics rot has been Presidential rankings. Here’s one I missed from 2018, when “172 professional historians” were asked to rank the POTUSes from first to last, using a 1-100 scale. A Jimmy Kimmel writer who ran out of current Trump-bashing material circulated this on Twitter, and it is, as they say, “trending.” 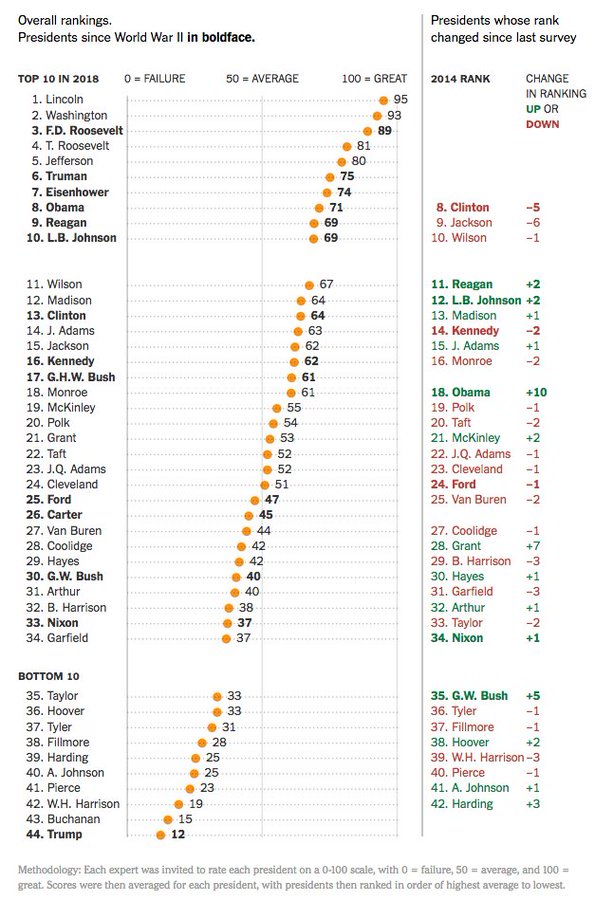 It’s easy to tell that the chart is garbage, and that its participants were soaked in all manner of bias, partisanship being a prominent one. The big clues:

And since Wilson was a noxious racist, you can’t even grant him the presumption of good intentions.

Obama’s destructive effect on U.S. race relations alone places him deep in the lower half. Then there’s Syria, Benghazi, using the IRS to sabotage a political opponent, then using the Justice Department and FBI to undermine his successor…yeah, he was terrific.

(Are you seeing a theme here?)

Finally, past Presidential ranking surveys observed the practice of not including the current President, since it is unfair (not to mention foolish) to rank any President before his tenure is over.  Imagine how Lincoln would have ranked in 1862. Or Nixon in 1970.

Never mind: these historians tossed aside that obvious rule along with any shred of professionalism and integrity, because they just hate this President so much. He’s so, so…unprofessional!

12 thoughts on “From The “Res Ipsa Loquitur” Files: The Presidential Ranking Survey”