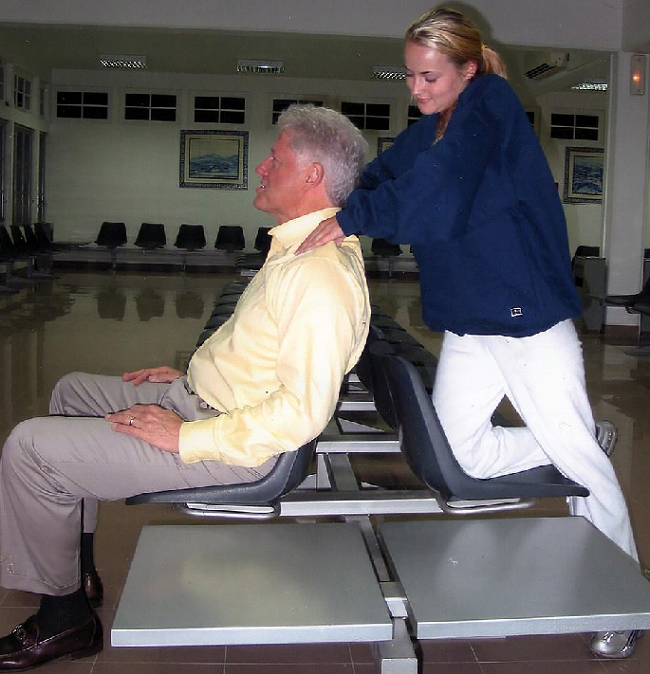 Well, as the saying goes, it couldn’t happen to a nicer party.

Yesterday, as the Democrats shook their hypocrisy before America by having Bill Clinton play Star of the Convention, confident that they have so effectively corrupted and misinformed the public (with the help of the complicit news media, natch), that it won’t see anything amiss even at their first gathering since the emergence of #MeToo.  Then, shortly before Bill prepared to bloviate, a series of photographs were published by the Daily Mail showing the ex-President being massaged by one of Jeffrey Epstein’s sex slaves.

The Democrats got away with this before, in 2012, when they declared themselves “the Party of Women” at their convention while featuring the most notorious sexual predator President since Democratic icon JFK.  Bill was the political rock star of the night then too, a nauseating exhibit of gall by Democrats and the real life equivalent of Donald Trump’s infamous boast that his supporters wouldn’t leave him if he shot someone in Times Square. Trump didn’t shoot anyone, but Bill Clinton did use his power and position to turn an intern into his sex toy (and was credibly accused of other sexual misdeeds, including rape).  Sure enough, loyal Democrats didn’t care,

Still, that was before major Democratic donor and Hillary Clinton pal Harvey Weinstein was revealed—to everyone but Hollywood and Democratic power-brokers, who already knew—as a serial harasser, sexual assault hobbyist and accomplished rapist. This spawned #MeToo, and Bill Clinton, I thought, had been finally pushed into the dark regions of public shame where Woody Allen, Al Franken, Bill Cosby, Matt Lauer and Harvey dwell. Silly me. I was especially certain that the party had to abandon its Bill addiction after its grandstanding Senators savaged a Supreme Court nominee as a rapist based on a thirty-year-old, barely-recalled tale out of school. I was super-duper certain once the national ticket in 2020 devolved into Joe Biden, who harassed women young and old on camera and who is currently accused of rape, and Kamala Harris, who was one of those grandstanding (and disgusting) Senators.

But no. The Democrats put Bill on the marquee again, figuring, as they have for four years, that if you hate  the President of the United States, nothing else matters—you’re good.

Jeffrey Epstein, however, was special. The late billionaire financier is widely regarded as  not merely a sexual predator, like Bill, but evil. After all, Bill Clinton only “groomed” one young woman to satisfy his ego and sexual appetites, thus wrecking her life. Epstein did this to hundreds, and passed them around to his friends among the glitterati.

Before his suicide or murder in August 2019, Epstein was accused of using his private fleet of jets to transport underage girls to his homes in the U.S. and across the world, often with his horny pals on board. A spokesperson for Clinton said that the former POTUS traveled with Epstein only four times between 2002 and 2003. Flight logs, however, indicate that Clinton flew the friendly skies with Epstein and others at least 26 times between 2002 and 2003. Clinton has repeatedly insisted that he never knew about Epstein’s alleged crimes….you know, just as Hillary never knew about the sordid activities of Harvey and her husband.

Just as Bill never had sex with that woman, Miss Lewinsky.

The newly public photos show Bill Clinton getting a massage from one of Jeffrey Epstein’s victims, Chauntae Davies,  during a plane trip to Africa in 2002. Davies’ horrible story is prominently featured in the Netflix documentary about Epstein, in which we learn that giving Epstein a massage was the traditional gateway to sexual slavery for Davies and others.

The Mail is a sleazy publication to be sure, but the distance between it and, say, the New York Times has closed rapidly in recent years, and not because the Mail is improving. Still, those Americans in whom a spark of ethics still flickers owe a debt of gratitude to the Mail. Before George Will disgraced himself by abandoning his own principles to indulge in a combination of Trump Hate and snobbery, I read him regularly, and “condign justice” was one of his signature phrases. Condign means “deserved,” and the Democrats deserved to have their hypocrisy exposed so spectacularly yesterday, not that any more evidence of hypocrisy is necessary.

The current convention will see a political party that has repeatedly insisted that President Trump should be removed from office as “disabled” nominate a candidate for the office who is already disabled, after speaker after speaker describes the current administration as a threat to the “rule of law” though the Democrats support illegal immigration, rioting, vandalism, emptying the prisons, and discriminating on the basis of race.

But maybe this latest smoking gun will lift the veils from the eyes of apathetic and gullible voters, and we won’t have to wait until Joe Biden shoots someone in Times Square to find out just how far gone the American public is.

18 thoughts on “Now THIS Is “Condign Justice”: The Democrats’ Hypocrisy And Bill Clinton’s Massage”