Oh yes, this will work out well.

Yelp,  the online review company, has announced its plan for a submissive grovel to Black Lives Matter and an atack on “systemic racism”: it will post alerts that a business has been accused of racism. The key word is “accused.” The company claims that following the “alert,” it will investigate the claims, but that is absurd: Yelp has neither the staff, expertise nor credibility, and definitely not the authority or access, to investigate such accusations.

Yelp has had well-documented problems with reviews from angry employees, fake customers, and real customers with dubious complaints or sinister agendas. However, in the corporate rush to show alliance with the mostly-peaceful protesters savaging so many cities, Yelp has decided to go all in and buy a ticket on the George Floyd Ethics Train Wreck. From the announcement of the new race-baiting initiative:

Here is the “alert”: 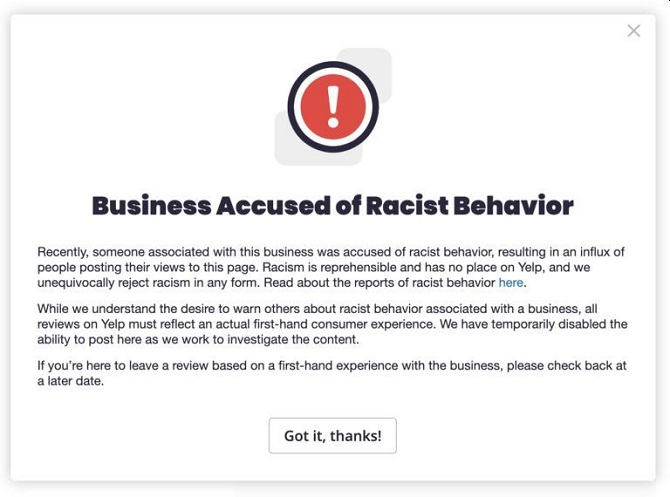 The Ethics Alarms position is that Americans should choose the businesses they wish to  patronize according to those businesses’ quality of service, not based on racial bias, which is what choosing businesses according to the color of their owners constitutes. In fact, I look forward to Yelp dealing with a tidal wave of complaints that its own policies are racist.

I also look forward to the lawsuits. “Didn’t think this one through, did you? You are going to be buried under lawsuits you’ll never recover from, rightfully so,” tweeted Amber Smith, former deputy assistant to the Secretary of Defense, in reaction to Yelp’s announcement.  Harmeet K. Dhillon, lawyer and founder of the Center For American Liberty, said Yelp facilitating defamation, concluding, “More work for me, more litigation for you.”

To the surprise of no one paying attention, the obvious parties are preparing to exploit Yelp’s idiocy. Here, for example, is a tweet from one of the antifa groups that organized the riots in Portland: 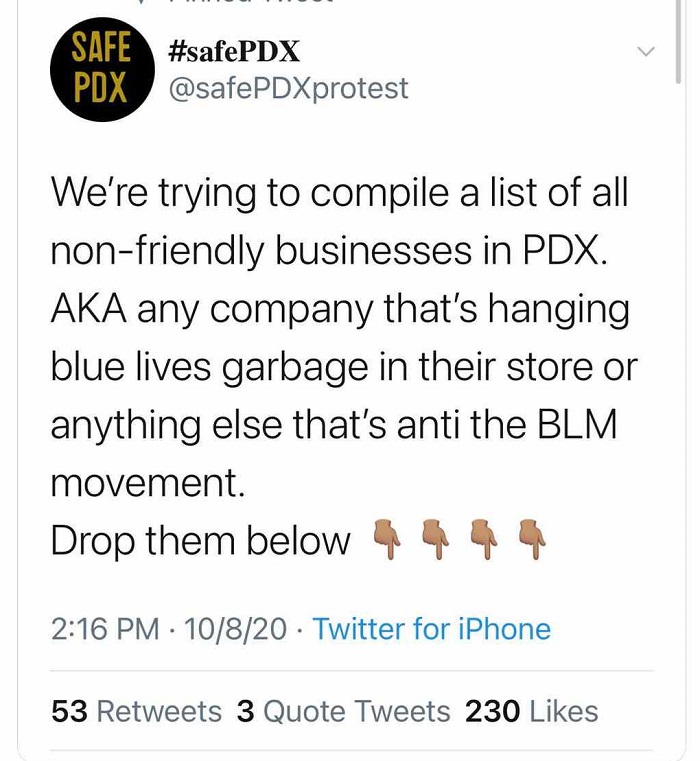 Needless to say, although I’m spelling it out anyway, we have seen the description of “racist” being attached to all kinds of benign, justifiable, and reasonable words and conduct. Either intentionally, negligently or naively, Yelp is just encouraging more race-baiting and intimidation. Director Robby Starbuck was among those critics quoted in Newsweek as stating what is obvious to everyone but Yelp’s submissive executives, apparently:

“This idiotic policy will be weaponized. It’ll destroy families and their businesses which will hurt their kids. Will Yelp get a ‘you’ve been accused of hurting kids’ badge?”

Note that Newsweek refers to the critics of Yelp’s corporate grovel as “conservatives.” Does one have to be conservative to comprehend how stupid and dangerous this particular pandering exercise is?