I would call this the smoking gun, but when it comes to the news media and social media’s anti-democratic collusion with “the resistance” and the Democratic Party to defeat President Trump, the metaphorical floor is piled many feet high with smoking guns. This one, however, is especially smoky.

Today, the New York Post—watch out, it’s a conservative paper, out of the mainstream media Get Trump! Club!—published this story:

Hunter Biden introduced his father, then-Vice President Joe Biden, to a top executive at a Ukrainian energy firm less than a year before the elder Biden pressured government officials in Ukraine into firing a prosecutor who was investigating the company, according to emails obtained by The Post.The never-before-revealed meeting is mentioned in a message of appreciation that Vadym Pozharskyi, an adviser to the board of Burisma, allegedly sent Hunter Biden on April 17, 2015, about a year after Hunter joined the Burisma board at a reported salary of up to $50,000 a month.

“Dear Hunter, thank you for inviting me to DC and giving an opportunity to meet your father and spent [sic] some time together. It’s realty [sic] an honor and pleasure,” the email reads. An earlier email from May 2014 also shows Pozharskyi, reportedly Burisma’s No. 3 exec, asking Hunter for “advice on how you could use your influence” on the company’s behalf.

The blockbuster correspondence — which flies in the face of Joe Biden’s claim that he’s “never spoken to my son about his overseas business dealings” — is contained in a massive trove of data recovered from a laptop computer….

The New York Times’ Maggie Haberman and Politico’s Jake Sherman, both certified Trump assassins, set out to debunk the story. No no! they were told. The proper procedure is to ignore it! It’s not news; it comes from their side.  Center for American Progress President Neera Tanden accused Haberman of promoting disinformation. Time op-ed columnist Michelle Goldberg accused Sherman of helping to “launder this bullshit into the news cycle.” Democratic historian Kevin Kruse asked why such good, loyal, woke reporters were “amplifying” the story.

Haberman and Sherman were, however, practicing journalism by challenging and checking the story, which deserves to be checked. The Post says the email was obtained from the hard drive of a computer that may or may not have belonged to Hunter Biden, and that turned up in 2019 at a computer repair store owner in Delaware. The FBI took possession of the laptop in December 2019, but the the store owner copied the hard drive and sent it to former New York Mayor Rudy Giulian, a current attorney for the President. Former Trump advisor Steve Bannon then learned about the email and leaked it to the Post.

As Robby Soave points out at Reason, even  if everything contained within the story turned out to be true, it still would not prove that the meeting with Joe Biden actually took place. However, he writes,

Haberman and Sherman were right to let their audiences know that The New York Post story exists, and they were right to challenge it. Many others in the media apparently believe the public cannot be trusted with such a challenging article. They have not merely shamed people for sharing it online, but also want to make it difficult for people to read the report at all.

This is, of course, a double standard. The number of dubious and ultimately disproved leaks and rumors that were published by the Times and broadcast by CNN and others alleging nefarious activities by President Trump or his campaign could fill the Albert Hall.

Facebook Communications Director Andy Stone, a former Democratic staffer—what a coinkydink!— announced that his social media platform would limit the story’s distribution pending an objective  fact-checker’s review—you know, like Snopes. He cited Facebook policy, which states that “in many countries, including in the US, if we have signals that a piece of content is false, we temporarily reduce its distribution pending review by a third-party fact-checker.” What “signals”? Oh, you know—like the fact that the New York Post is potentially damaging to the man running against Donald Trump. 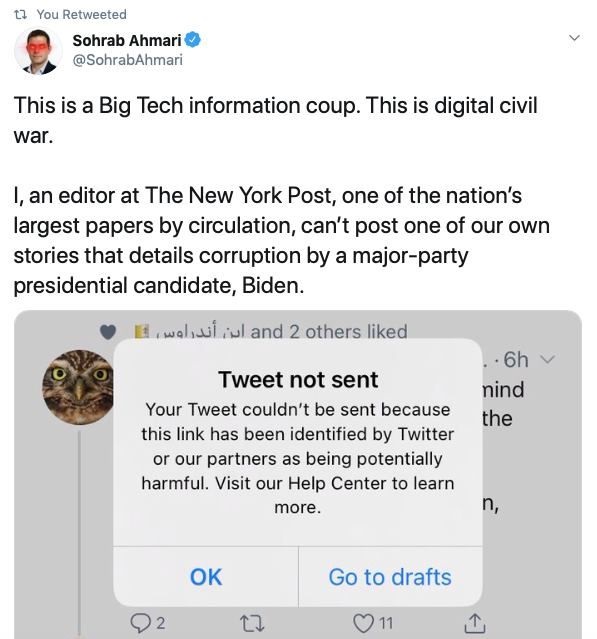 Then poor, biased but sincere Washington Post factchecker Glenn Kessler really stepped in it. He explained why the Post would ignore the story by citing the paper’s alleged policies about leaked stories and other accounts of dubious reliability:

Fascinating! That prompted such predictable and completely fair reactions as these:

From The Federalist’s Mollie Hemingway:

“The paper that was the uncritical receptacle for the sketchily edited leaks of the Russia collusion narrative had a policy against what it did? Interesting, but weird how it’s unevenly applied. Also, the 2018 midterms and your smear operation against Kavanaugh would like a word.“

“A strict policy: Never believe or pass on news from sketchy sources. Never. Unless it’s a secret recording of the President. Or the First Lady. Or the National Security Adviser. Or tax returns. Or a dossier. Or a pee tape. Or head-of-state call transcripts. Or…”

So, I ask once again, which is it? Do the defenders of the current news media and social media role as partisan advocates and manipulators of public knowledge and understanding enable this conduct because they agree with the underlying political motives, and thus deem it an example of the ends justifying the means?

Or are they just spectacularly biased, stupid, and corrupt?

If there is a third and less damning explanation, I’m missing it.