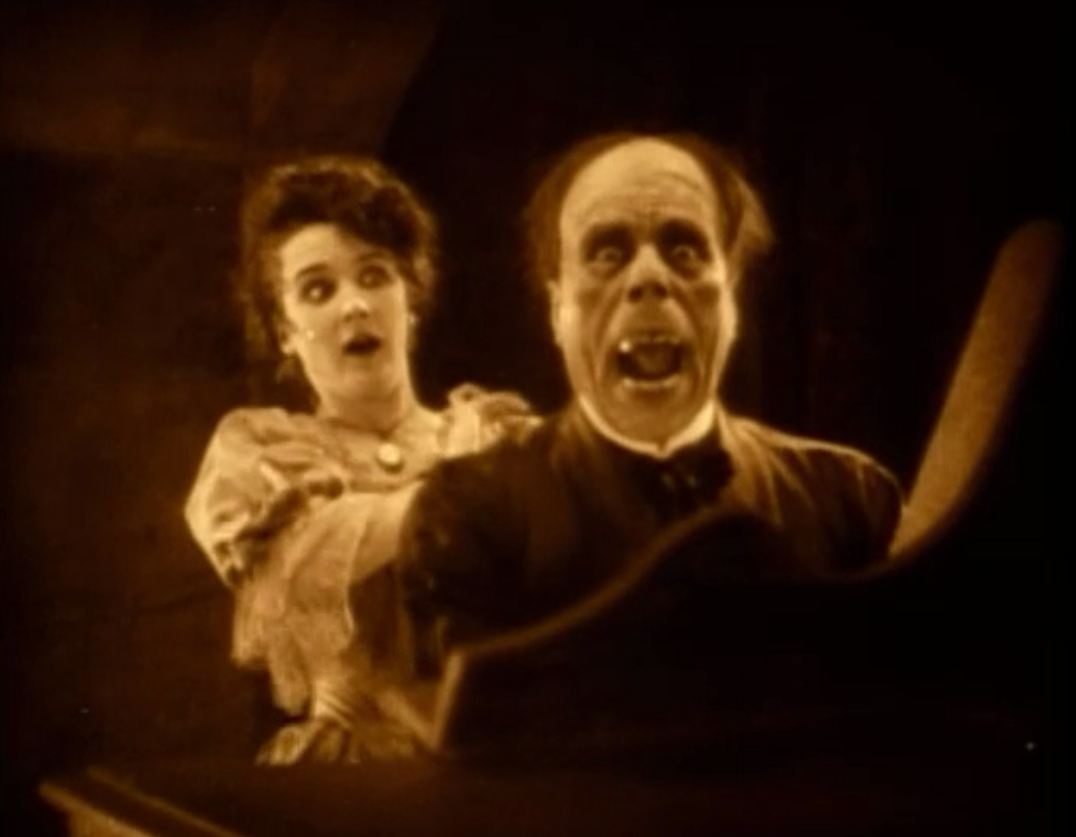 1. Notes from The Great Stupid. Here is a passage from a New York Times book review of “The Tragedy of Heterosexuality”:

“In examining the pressure to partner with the opposite gender we find the extortions of capitalism, the misogyny of violence against women, the racist and xenophobic erasure of nonwhite families, and the homophobic hatreds that pervade so much of everyday life.”

Well, that and the biological imperative to continue the species. This brilliance is the work of Haley Mlotek,  a senior editor for SSENSE. Imagine: this is the quality of thought among our intellectual class.

No wonder the political class is so idiotic.

2. So this is a Pulitzer Prize winning journalist, is it? Nikole  Hannah-Jones, faced with a careful and accurate fisking of her fraudulent “1619 project” by Times columnist Bret Stephens (covered by Ethics Alarms here) did not try to rebut him, or make a civil, reasoned argument. She did what her entire generation of prominent African Americans have been conditioned to do, because it works so well. She accused Stephens and the Times of racism, with a dash of sexism for flavor. Hannah-Jones tweeted,

“In 1894, the NYT called Ida B. Wells a ‘slanderous and nasty-minded mulattress’ for daring to tell the truth about lynching. 100 years later she earned the Pulitzer Prize. These efforts to discredit my work simply put me in a long tradition of [black women] who failed to know their places.”

(It is satisfying to watch the Washington Post pounce on the Times over this fiasco. The rivalry between the papers is one of the few factors that ever pushed one of them into practicing actual journalism these days.)

As for Nikole Hannah-Jones, she is a child. Her tantrum was irresponsible and an embarrassment to the Times, and she should, by rights, be fired. She won’t be, because of black privilege, now enhanced in the wake of the George Floyd Ethics Train Wreck. The embarrassment for the Times, however, will linger. This woman was given leave by the paper to create and promote a false historical narrative that was not designed to enlighten but to further a political agenda. In truth, the Times deserves the embarrassment even more than Hannah-Jones deserves to be fired.

3. Congratulations to Jack Dorsey! The CEO of Twitter today gave us one of the best examples of Ethics Alarms Rationalization #19A, “It wasn’t the best choice.” (I hate this rationalization.) Speaking of Twitter’s increasingly infamous attempt to bury the New York Post story about discovered emails suggesting that Joe Biden may have been assisting his ne’er do well son in his Ukrainian influence-peddling, Dorsey said, “Our communication around our actions on the@nypost article was not great.” “Not great” is a misleading and intentionally mitigating description. It was incompetent and wrong.

Nonetheless, Twitter continues to suspend accounts that try to link to the story. The results of this sudden outbreak of obvious and undeniable partisan bias in a Presidential campaign—not that this bias hasn’t been screamingly obvious more more than four years—has had the perverse (but yummy!) effect of not only focusing public opinion on the unethical media effort to control the election by controlling public access to information, but making it impossible to hide the Biden story, which if true, has wide implications. The usual AUC procedure with facts and events that are unhelpful to the Democratic Party’s coup attempts is to bury them: give them little or no coverage, pigeon-hole them as “conservative media” fantasies or Fox News conspiracy theories, and have their pundits declare them “nothing-burgers.” This recipe has been effective; it is amazing, for example, how many legitimate stories that expose the corruption of the Democratic Party or its allies that my sister, an anti-Trump junkie, displays complete ignorance about when we discuss political matters.

This story, however, which if true could be devastating, can no longer be hidden. From Victory Girls:

There are SO many problems with what has happened today. First, that the social media censors even thought this was a good idea. Secondly, that the censors were PROUD of what they were trying to do. Because you know, RULES and such:

“Facebook’s announcement that it would throttle access to the New York Post’s investigative reporting came via Andy Stone, a former Democratic congressional and campaign staffer who worked for Barbara Boxer and John Kerry.As of this moment, every American voter is currently banned from linking to news reported by one of the largest papers in one of the largest states in the country.”

Even The New York Post’s primary Twitter account has been locked — they claim the Hunter Biden stories violate their rules against the “distribution of hacked material” — something that apparently didn’t matter regarding President Trump’s illegally obtained tax returns. Twitter users can’t even direct message the story. That’s how much CEO Jack Dorsey doesn’t want you to know what’s in it.”Third, because it was a report involving Joe Biden, Hunter Biden, Ukraine, and Burisma. Block that story, but not this one nor this one.

This targeted censorship unleashed a storm that rained down on social media. Twitter and Facebook had literally created their own Streisand effect by attempting to censor a specific news report, and the NY Post as well. 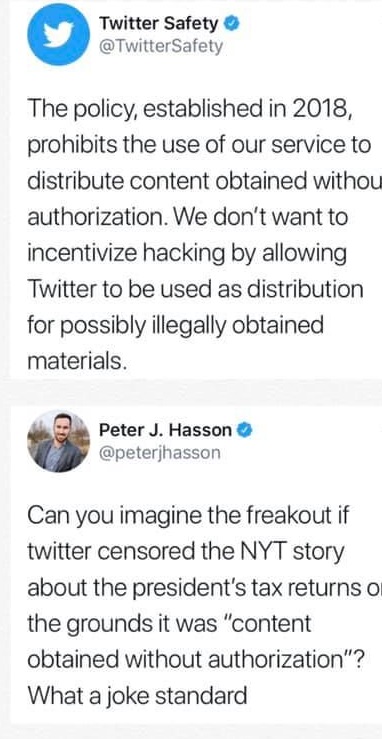 …and this tweet from CNN’s Jake Tapper, who of late has begun to relocate the integrity that CNN has tried, with some success, to burn out of him: 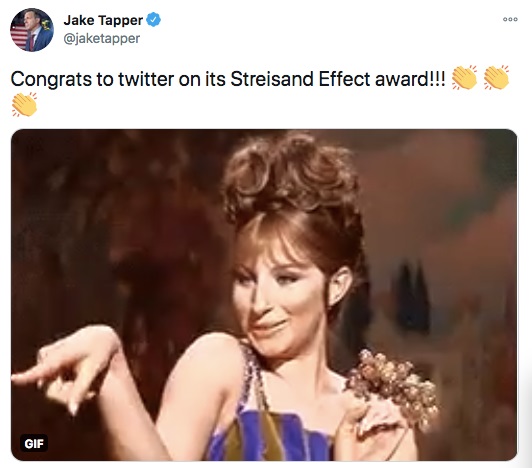 4. UPDATE: Here is Ann Althouse’s reaction this morning to the New York Times and Washington Post’s coverage—late!—of the New York Post controversy. She makes it clear that both papers are trying to frame the story as false, or at least too suspicious to trust. Ann also reveals that at this point, she’s not making any pronouncements, and that she is abstaining in the 2020 election, presumably for reasons similar to why I have been tending that way.

5. Back to Jake Tapper”s ethics recovery, he actually slapped down Biden’s deputy campaign manager when she made the risible claim that the Senate seeking to confirm President Trump’s Supreme Court nomination was “unconstitutional” be telling her (and his viewers), “Constitutional doesn’t mean I like it or I don’t like it… There’s nothing unconstitutional about what the U.S. Senate is doing.”

6. Is this relevant to anything? GOP Rep. Ben Sasse asked a really silly “Gotcha!” question of Judge Barrett, who has been most impressive so far in the face of withering fire from Democrats. He asked her to name the five guarantees in the First Amendment, and she couldn’t think of the one I always forget: “Congress shall make no law prohibiting the right of the people to petition the Government for a redress of grievances.” The reason Amy and I have this problem is that the fifth right is usuall just a sub-category to the first, the right to free speech, and court cases have been rare.

I’d call Sasse’s question about as relevant as asking her to name the Seven Dwarfs or Santa’s reindeer.

7. And, finally, in the category of “far too little conveniently and economically late“, we have this from the Associated Press:

Germany has agreed to provide more than a half billion euros to aid Holocaust survivors struggling under the burdens of the coronavirus pandemic, the organization that negotiates compensation with the German government said Wednesday. The payments will be going to approximately 240,000 survivors around the world, primarily in Israel, North America, the former Soviet Union and Western Europe, over the next two years, according to the New York-based Conference on Jewish Material Claims Against Germany, also referred to as the Claims Conference.

With the end of World War II now 75 years in the past, Holocaust survivors are all elderly, and because many were deprived of proper nutrition when they were young today they suffer from numerous medical issues. In addition, many live isolated lives having lost their entire families and also have psychological issues because of their persecution under the Nazis.