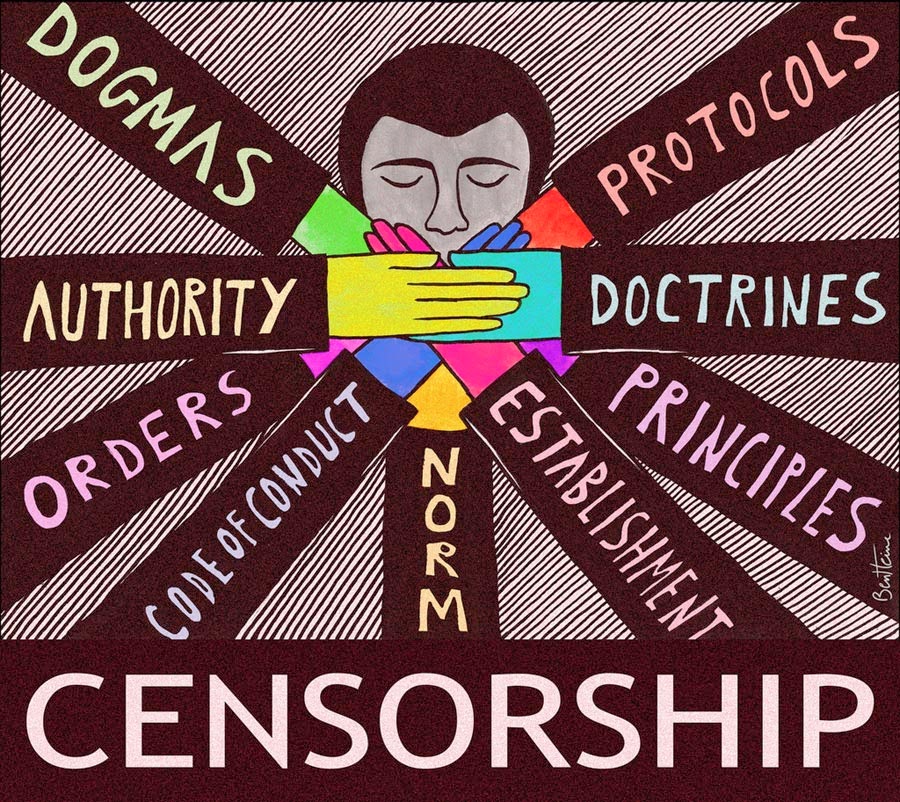 I know who Bret Weinstein is; maybe you don’t. He’s a biologist, evolutionary theorist, and, of late, a free speech activist. The fact that you may not remember him is my fault: he was the hero in the Evergreen State College (in Washington State) racist fiasco in 2017, where the school decided it should order all whites off campus for a day. He was the sole professor on campus with the guts and principles to refuse to leave, resulting in his vilification, harassment, and ultimately, his resignation. Why I didn’t highlight his courage in an “Ethics Hero” post, I don’t know: I didn’t even give his name a tag in the sole post where he was mentioned.

Fast-forward to 2020, and Weinstein found his Facebook account suspended because he wrote something that the Thought Police there felt was inappropriate—you know, like all of Ethics Alarms is inappropriate on Facebook for daring to explain that performers who have worn dark make-up are not all racists or advancing racism

“I have been evicted from Facebook,” he tweeted to his 400,000 followers. “No explanation. No appeal. I have downloaded “my information” and see nothing that explains it. We are governed now in private, by entities that make their own rules and are answerable to no process. Disaster is inevitable. We are living it.”

Later,Weinstein revealed, Facebook told him it had “already reviewed” the suspension and the decision “can’t be reversed.”

Ah, but among his 400,000 followers is John Lennon’s articulate, contrarian and often conservative-sounding younger son, Sean. He tweeted to his friend’s rescue, writing,

And…Mirabile Dictu! The decision could be reviewed after all—at least when a celebrity with impeccable “woke” lineage and the inherited affection of millions makes a public stink! Someone with the handle Liz Bourgeois@Liz_Shepherd contacted Weinstein, writing,

So the decision could be reversed, contrary to what Facebook had said…at least when Sean Lennon is on hand to sing “All I am saying is Give Bret A Chance.” Weinstein, being the free speech warrior he is, was on that like a pouncing puma, tweeting,  “What protects regular people from such “mistakes” Liz?”

Nothing, of course. It is a rhetorical question.

But wait! There’s more! Ann Althouse, who gets a Pointer for this ethics story, dug a bit, and the Facebook thought enforcer identifies herself on her Twitter page as  “@Facebook comms, formerly @TheDemocrats and @SpeakerPelosi. (Just in case you wondered why Facebook has been so eager to shut down the Hunter Biden emails story…)

Althouse is on her game, writing,

This is all very fishy. She’s obviously a Democrat and completely open about it, and I take it she works at some level at Facebook and that “comms” means “communications” —  that is, public relations. It is bad PR to cancel Bret Weinstein and have Sean Ono Lennon pop up as his friend to call you insane overlords.

Who believes Facebook just flagged Weinstein’s account as an imposter? Why would such a harsh unreviewable cancellation message be sent to a person who’d just gotten flagged as an imposter? Automatic actions like that obviously can go wrong, so who believes that’s something Facebook has set up to be unreviewable? Indeed, Facebook seems to have reviewed it, though if the method Weinstein used was getting Sean Ono Lennon to tweet about the injustice, that is hardly available as a method of review for anybody else.

“It can’t be reversed” — but it was reversed! Facebook didn’t follow its own stated procedures. There’s a special injustice in that. There’s an alternate path to relief for some people — famous people or semi-famous people with ultra-famous connections — and the rest of you deplorables can slip down the memory hole forever.

I see it a little differently, as someone who is still being actively muzzled by Facebook for daring to engage in Facebook Ant-Woke ThoughtCrime. Facebook doesn’t want its deliberate manipulation of what the public can read and think about exposed (except by “deplorables,” who the Good People don’t respect or believe), so whenever it inadvertently censors someone whose mistreatment will set off ethics alarms and “this is totalitarian” alarms, it pulls back and says “Oopsie! It was all a misunderstanding.” Effectively, this means that Bret Weinstein and Sean Lennon have free speech in this society, but I don’t.

These—the Liz Whatever Her Real Name Is soldiers of suppression and oppression—are the people trying to carry Joe Biden across the finish line, and thus begin the task of disassembling American institutions, protections of basic rights, and individual liberties.