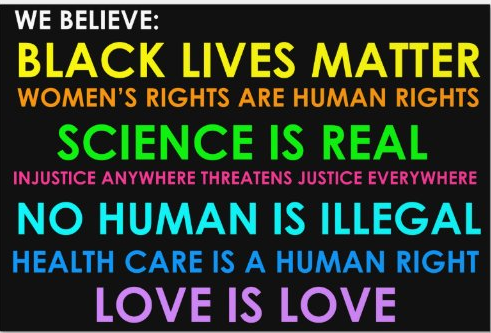 Once again, I don’t understand how this episode could happen. But let me back up.

Today, while walking my dog on a glorious fall day in Alexandria Virginia, and observing the odd juxtaposition of virtue-signaling lawn signs, Biden-Harris signs and Halloween decorations (Spuds was quite unsettled by 8 foot standing models of a ghoul and his love wearing Trump and Melania masks), I passed one neighbor with a lawn sign grand slam: a Biden sign, the thing above, a straight Black Lives Matter sign, and a sign that read, “End Racism Now!”

I already noted the questions I would like to ask anyone with the BLM sign here. The virtue-signaling extravaganza above is almost too easy, since it’s one flaccid, intellectually lazy generalization without substance after another, and to my mind, is signature significance for a dolt. (“Love is Love, for example,is Rationalization  23 A. Woody’s Excuse: “The heart wants what the heart wants”)

But what precisely is the entreaty “End Racism Now” demanding? It appears to contradict Black Lives Matters, which involves demonizing whites and white society, as well as requiring an end to race-based preferences. What is racism? If it’s an attitude, the sign seems to be advocating brain-washing, indoctrination and re-education camps. If the sign refers to conduct, then I need a definition. Many “systemic racism” complaints consist of African Americans preferring to have “someone who looks like me” on a court, on a board, in a  movie cast. Isn’t a preference for those who are like us one of the definitions of racism being advanced? (It’s not racism, or if it is, it’s racism for anyone, not just whites.)

This story, however, is an example of racial discrimination oozing from racism, and not only should we be able to end such incidents now, I’m stunned that this kind of conduct hasn’t been wiped off the face of the U.S. map.

The Brown County High School (Indiana) high school year book was published with a photo of the basketball team that had a single African American player. All of the white players’ names were attached to the photo, but the black player was labeled simply as “Black Guy.”

“We acknowledge that yearbook is the only class at this school where all assignments and homework are published for all to see,” the school’s principal said in a statement. “We strive for perfection and hope any errors are minor and inconsequential. This is not an inconsequential error.”

Ya think? Just how hard would it be to prevent this from happening? The only difference between labeling the student a “nigger” and what was done was the choice of word. The effect and meaning were the same.

Oh, the district has launched an investigation of course. Why bother? You fire the teachers who supervised the yearbook, and punish every student who had any editorial role in the publication or who saw the yearbook before it was published.

Then you set out to figure out what you, the school, the parents, everyone is doing wrong.

“Our district has been working to advance equity and inclusion for all protected classes; however, an occasion like this evidences the need for expanded response,” the principal says.  “We are committed to ensuring that Brown County Schools provide a welcoming, safe, inclusive, and equitable school community. We remain relentless in our pursuit of the same.”

Yeah, and you’re doing one hell of a job there. This incident could not occur if the culture is as the principal describes. The investigation, to be worth anything, needs to be expended include the principal, the other administrators, the students and the school district and its board.

The district “is working collaboratively with the student’s family to find ways to rectify the situation” which was a “clear violation of our nondiscrimination policy.”

Figured that out, did you? Here’s a bulletin: there is nothing that can rectify the situation. The issue isn’t the yearbook, it is the hateful, dehumanizing insult. The incompetent principal—her name is Laura Hammack, so you know not to hire her when she applies to work for your bait shop—made a Facebook video saying, “This has been a really hard day for a student and for a family. And we will work hard to make sure that a student and a family who are experiencing what they’re experiencing today don’t need to experience the same feelings moving forward.”

They can do this if they change schools and leave the community. Maybe.

Hammack thinks a solution might issuing yearbook reprint and allowing students to exchange them for free. That’s not a solution, that’s a cover-up. The books should be kept, preserved, and consulted frequently to remind a school and a region that racism is alive and feeding.