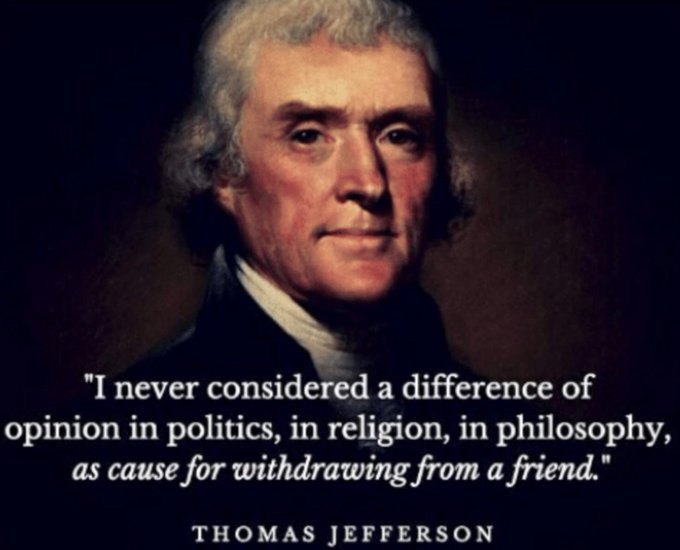 That meme turned up on Facebook. Of course, progressives and the Woke think Jefferson is racist whose memory should be consigned to the ash heap of history, so no wonder they disagree.

1. Daniel Horowitz suggests that Democratic and media fearmongering about the dangers of exposure to the Wuhan virus might have had the perverse effect of scaring Democratic voters away from the polls. “While we don’t know the ballot choices of those who voted early, we do know the party registration breakdown in most states. And in nearly every critical state, Republicans are doing much better than they did in 2016 in terms of in-person early voting,” he observes. “Given that Trump won in 2016 and the electorate will only get more favorable for Republicans on Election Day itself (because the majority of Democrats vote early), this portends an outcome way out of sync with the majority of polls.”

Boy, would that be what NeverTrumper George Will likes to call “condign justice”!

2. Hey! It just occurred to me: with all the grandstanding, insults and pronouncements that Trump had to be impeached or the republic was in existential peril, nobody mentioned the ugly, cynical sham at all, not even Biden when he was trying out every Big Lie in the book to pander to the Deranged in the Democratic base.

What does that tell us about the seriousness of the impeachment debacle? It was exactly as contrived and illegitimate as I concluded, and the pundits and news organizations that endorsed the attempt to overthrow a President because they didn’t like his “style” was unethical politics at its worst.

3. Yesterday, Joe Scarborough said on “Morning Joe” that if President Trump declared victory on election night before all the votes have been counted.  NBC would refuse to broadcast the speech. Quoth Joe, “We’ll be doing coverage on Peacock and we can assure you if Trump declares victory we’ll say, don’t take the feed. It’s not going to happen. We won’t be part of any disinformation campaign, we’ll be doing election coverage until midnight or whenever is over.”

The President of the United States will give a speech, and NBC plans to keep that fact from viewers, as well as what he says.  Nah, there’s no mainstream media bias!

Professor Turley states what nobody should have to,

The problem is that they are in the news business and NBC viewers tune in for news. This would be, by any measure, news.  Indeed, if premature or completely baseless, a victory speech would be even more significant news.What concerns me is the relative ease with which news figures now state their role in protecting viewers from what they consider “disinformation.”

It is precisely the slippery slope that took us to the expanding private censorship on sites like Twitter and Facebook, where a well-founded story in the New York Post is blocked for weeks.  Despite the tech companies admitting that the move was a mistake, Democratic Senators demanded more censorship from the companies in the recent hearing. What is missing is the original clarity of the free and open forum of the Internet.

Now a news program is pledging in advance to block its viewers from hearing the President directly if he claims victory on Tuesday night. Instead, they can expect the same formulaic, approved coverage that we now expect in the age of echo chamber journalism.

NBC recently was criticized for a bait-and-switch story on Hunter Biden where they debunked an obscure document rather than address the confirmed emails found on Biden’s laptop.Obviously, viewers on NBC can switch over to Fox or another network to watch any presidential speech on election night. However, Scarborough was assuring the viewers that they would be protected from such news. Clearly he viewed promising to censor the President as a draw for NBC’s viewers — assuring viewers that they would be protected from the news like some journalistic safe space.  Protecting viewers from news was not a goal of NBC when I worked for the company many years ago. This would be news any way you cut it. It can be immediately followed by commentary pointing out that such a claim may be premature.