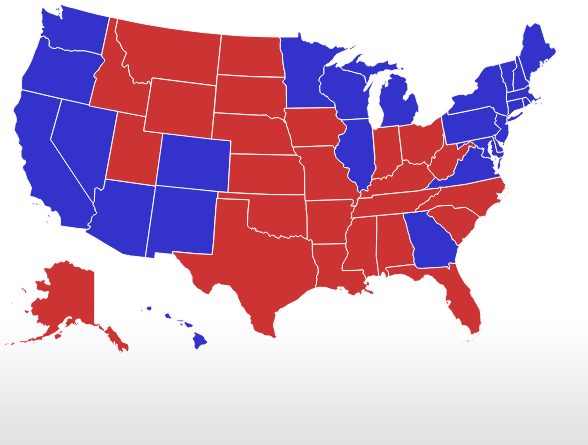 When I noted in last night’s ethics update that North Carolina’s Electoral College votes had been added to the Trump column, I was not aware that that Georgia had been called with Biden in a small but likely uncatchable lead (nonetheless, a recount is underway that will be complete on Wednesday: thanks to James Flood for the correction). Without Georgia, there is no sliver of a path for the President to be re-elected now. The Biden-Harris ticket has 307 EC votes, well above the 270 threshold required for election. RealClearPolitics, one of the very few news sources that did not display open bias and worse, a desire to push the election to a conclusion they favored, has the race marked as decided.

President Trump should make his concession speech today. He has a duty to concede as soon as possible, for the good of the country, in fairness to President-Elect Biden, and, though I doubt anyone could convince him of this (though I would love to have the opportunity to try), himself.

The President should do everything in his power to establish a clear contrast with the irresponsible conduct of Hillary Clinton after her defeat in 2016. She set out to undermined Trump from the beginning by refusing to accept that her loss was genuine and legitimate, thus setting the stage for a four-year effort by Democrats, the “resistance,” and the news media (the “Axis of Unethical Conduct”) to withhold national support of his leadership and wreck his term in office by unscrupulous and despicable means.

One reason this conduct by Clinton and her supporters was so destructive is that it created a precedent that risked being followed going forward to future elections, permanently weakening what had been a strength of American democracy. The President can go a long way toward undoing that damage. I think it is crucial to our national health that he do so, and the sooner the better.

Trump won’t what he should, of course, and this is his tragedy. All of our greatest personal strengths are also our greatest potential weaknesses, and the President’s strength is his combativeness and perseverance. These traits allowed him to accomplish an impressive number of policy achievements despite the lies, hatred, insults and fury being showered on him literally every single day. He has good reason to be bitter as well as vengeful, which is all the more reason for him, as a President, as a role model, and as a custodian of the nation’s health, welfare and future, to rise above his emotions, and do what is right.

Democrats, members of the resistance and about 99.9% of the media are ethically estopped from demanding that Trump behave better than they have. Incredibly, vicious serial attackers of the President like Nancy Pelosi and Adam Schiff have proclaimed that the President’s challenging the preliminary election results poses a “threat to democracy.” Their hypocrisy defies belief.

Trump also must stop claiming that the election was “rigged.” Oh, it was rigged all right, but he shouldn’t be the one saying so. At this point, Hillary Clinton has lapped the field as the most ungracious, reckless and devisive losing Presidential candidate in our history. Trump shouldn’t try to top her, although he, unlike her, has good reason to feel the election was unfair. I covered some of the reasons here.

But there is nothing anyone can do about it in practical terms, and prescriptions that are not practical or realistic are not ethical. I hope to get a post up about the “fruit of the poisonous tree” argument, a criminal law principle that some would apply to an election won by underhanded means. Declaring the loser of both the popular vote and the Electoral College total on the theory that the entire election was invalid is a recipe for civil war; it’s as irresponsible as it is impossible.

The Democrats, the news media and the Trump-Deranged are not going to make it any easier for the President to resist his worst instincts. He should rise above them, but that’s not his style, unfortunately.

There are ways for those rightly disgusted at the tactics employed to end the Trump Presidency to try to ensure their misconduct does not become a destructive national habit and our system has ample options for engaged citizens to teach politicians and their supporters to observe minimal levels of fairness. For now, our ethical duties as Americans and citizens include giving the new President a clean slate and the benefit of hope, faith, best wishes as well as the promise of support when he is right and civil criticism when he is wrong.

You know: all the traditional and time-proven democratic essentials that his party denied to Donald Trump.

President-elect Biden will need all the support he can get once he takes office. He is old, declining, stuck with an ambitious and principle-free VP and leading a party that has lost its ethical bearings. The problems the nation faces now are challenging, even frightening. He needs our support. What he does not need is predecessor seeking to undermine him and his chances to succeed.

I hope against hope to soon hear similar words from President Trump.