1. “Then they came for Professor Turley…” Jonathan Turley, who has distinguished himself throughout the Trump years and the 2016 Post Election Ethics Train Wreck with clear, unbiased, non-partisan analysis that generally correctly identifies who is the transgressor and why, was attacked by University of Colorado Law Professor Paul Campus who compared his discussion of possible voting irregularities to Holocaust denial. Turley is measured, as usual, in his criticism, but he is obviously troubled by the continuing trend, writing in part,

“It is part of a wave of intolerance sweeping over our colleges and our newsrooms. It is therefore an ironic moment as someone who has been writing about the growing intolerance of dissenting views on our campuses and efforts to fire academic.  Some have been targeted for engaging in what is called “both sides rhetoric” rather than supporting a preferred narrative or viewpoint. Campos is arguing that it “would be appropriate to fire” any professor who stated that we should allow these challenges to be heard even though they have not and are unlikely to produce evidence of systemic fraud to overturn these results.  That is a view of academic freedom and viewpoint tolerance shared by some in academia.

I am not the first academic that Campos called to be terminated for his views. In the end, I would defend Campos in his posting such views. Unlike Professor Campos, I do not believe that he should be fired for holding opposing views or even calling for others to be fired. That is the cost of free speech. Indeed, Professor Campos is the cost of free speech.’

In fact, it’s what Professor Turley voted for, as I suspect he did, when he voted for Joe Biden.

2. Regarding another favorite Ethics Alarms blogger…I respect and value Ann Althouse’s opinions and analysis, but boy does she epitomize what’s irresponsible about intellectuals.  There is a constant tone on her blog that it’s all just a big cosmic game, nothing really matters much, and all these intellectually inferior people are running around in circles, obsessing over base and minor matters. Meanwhile, Ann is preoccupied by the fact that there’s a “homophone for alibi,” the relative size of statues, and some local interviewer in Lincoln, Nebraska. These matters seem to concern her about as much as the means by which a President was finally taken down, the cracking of our democratic institutions, and the fact that our journalists have become no better than rumor-mongers and partisan assassins.

It’s that studied distance that academics and those over-educated egotists who are full-time frolickers in the playgrounds of the mind display that makes normal people—and me— suspicious of their motives and judgment.

3. The Oxford Dictionary changed its definition of “bigot,” and some conservative pundits find it sinister. The new version is beneath the old. 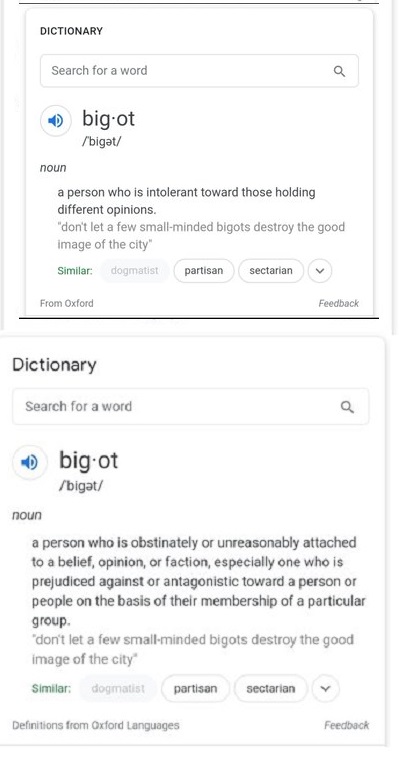 The new definition leaves little doubt that this inference is being taken further by the intelligentsia that want you to know what to believe and think…Are you “unreasonably attached” to any beliefs? Like say, that Jesus Christ is exclusively the only hope for eternal life? Or that abortion is an abomination in the face of a holy and just God? Or that giving sex changes to kids is a brutal form of child abuse? Or that men shouldn’t be in the restroom with your teenage daughter? If so, this new definition justifies animus toward you. It‘s now okay to hate you for “clinging” to beliefs deemed unacceptable.

This complaint meets my definition of confirmation bias and perhaps paranoia. I’ve always thought the definition of “bigot” was the new one. It’s exactly how I have used the word for decades.

4. Here’s some diversity that is a breath of fresh air! The Miami Marlins announced that Kim Ng will be the MLB National League team’s new general manager, making her the first Asian-American GM in Major League Baseball history and the first woman to ever act as a GM for a men’s team in any of the major North American sports. Baseball doesn’t do affirmative action: her credentials are impeccable She’s worked in baseball for 30 years, and as an assistant GM for both the Yankees and Dodgers. Congratulations are due to Ms. Ng.

5. The ethical implications of this are what you make of them: President Trump has apparently won North Carolina, giving him 232 electoral votes. Here’s the completely unbiased and accurate headline from the state’s News & Observer: “President Donald Trump wins North Carolina after losing reelection.”

(The President has not “lost re-election” at this time.)

Five states now assigned to Biden have a less than 1% advantage for the Democrats: Wisconsin, Georgia, Pennsylvania, and Arizona. This seems like as good a time as any to offer this poll.

6. I watched “A Man For All Seasons” again…and discovered a quote that I had missed in all the other viewings through the years. It seems especially apt right now:

“If we lived in a state where virtue was profitable, common sense would make us saintly. But since we see that avarice, anger, pride and stupidity commonly profit far beyond charity, modesty, justice and thought perhaps we must stand fast a little…”