It’s not Pearl Harbor, but the assassination of John Lennon in Central Park 40 years ago today by a deranged fan is one of the saddest days in popular music history, on the level of the premature deaths of George Gershwin and Buddy Holly.

I really don’t want to talk about it.

1. Scary. The New Yorker’s Steve Coll wrote that”Those of us in journalism have to come to terms with the fact that free speech, a principle that we hold sacred, is being weaponized against the principles of journalism.” David Harsanyi writes at The National Review,

If you believe Americans are too stupid to hear wrongthink, transgressive ideas, and, yes, fake news, you’re not a fan of the small-l liberal conception of free expression. That’s fine. Those ideas seem to be falling into disfavor with many. But the sanctity of free speech isn’t predicated on making sure people hear the right things, it’s predicated on letting everyone have their say. Because as always, the question becomes who decides what expression is acceptable. I’m not keen on having the fatuous media reporters at CNN or activist “fact-checkers” at the Washington Post adjudicating what is and isn’t permissible for mass consumption…this kind of selective esteem for sacred ideals is becoming popular on the contemporary Left. Religious freedom is wonderful when the government protects Native Americans who want to smoke peyote, but it is “weaponized” when an order of nuns decides it’s not interested in chipping in for condoms or an Evangelical business owner decides he’d rather not participate in a gay marriage. Due-process rights are foundational to American life, unless they are being “weaponized” by college students accused of sexual assault….For four years, journalists acted as if Donald Trump was an existential threat to free expression because he berated and insulted reporters. Trump’s tone was certainly unpresidential, but it needs to be said that he did absolutely nothing to hinder anyone from criticizing him or reporting about him. Contra the self-canonized Jim Acosta, it was not a particularly dangerous time to tell the truth. Indeed, reporters were not only free to accuse the president of being a fascist, they could concoct entire fake scandals surrounding the Russians, and Trump was powerless to stop them….

As I will be saying for the next four years as often as possible: This is what those who voted for Joe Biden have endorsed in their determination to express their tantrum over a President whose style they found obnoxious. I really don’t know how they will be able to live with themselves.

2. Well, here’s some good news. Even pandemics and foolish and destructive lockdowns have their unintended positive sides. Netflix’s “The Queen’s Gambit” a series that follows a female , a chess prodigy as she rised through the ranks of the chess world as while struggling with addiction and trust issues, is being seen by many more young people than it normally would in a healthier society. This, plus the oppressive isolation, has made chess boom. Sales of chess sets in the United States has risen by around 25% in this annus horribilis, , but in the weeks since “The Queen’s Gambit” premiered sales have grown 125%. At the beginning of the year, up to 11 million chess games were played online every day, but when the pandemic hit, the numbers grew to an estimated 16 million to 17 million games per day.

This is all to the good. Chess is one of the rare games (poker is another) that teaches important life skills better than any class. It is both a pastime and a route to life competence I personally find “The Queen’s Gambit” disappointing, and I’m a fan of tournament chess, but in an age of declining intellectual skills and rotting educational institutions, a resurgence of chess can only help.

3. Speaking of Netflix series...Trial by Media has several episodes with ethics exploration value in its first season, notably “King Richard,” which upset me so much I had a hard time watching it. Scrushy was the narcissist con man founder of HealthSouth Corporation, who was charged with 36 counts of accounting fraud in 2004. His defense strategy, concocted by two excellent lawyers reminiscent of Johnny Cochran, was to reinvent himself before the trial as an evangelical figure in Birmingham, Alabama while worshiping at black churches (Scrushy is white) and giving money away to community projects. His two folksy attorneys relied on a “narrative” rather than evidence, painting Scrushy as a noble victim.

He was ultimately acquitted from the charges despite overwhelming evidence in 2005. Amusingly, one of the black ministers whose church Scrushy has frequented muses on camera that “we didn’t see much of Richard after that.” Five months later, Scrushy was indicted again, this time on 30 counts of money laundering, extortion, obstruction of justice, racketeering, and bribery of former Alabama governor Don Siegelman. This time, he was convicted and spent several years in prison. My favorite ethics moment is when Scrushy’s main trial lawyer, Jim Parkman, is asked about his headline-making anecdote in his opening statement, in which he quoted his grandmother as always telling him”every pancake, no matter how thin, has two sides.” “Did your grandmother really say that?” Parkman’s asked on camera. “No,” he admits after a long pause. “But she could have!”

That’s a direct lie,told to a jury, by an Alabama lawyer whose ethics rules specifically prohibit deliberate falsehood in the practice of law. Yet I bet no lawyer would ever be disciplined for doing it.

4. More “These are the people Democrats voted for”…from the Michigan Attorney General: 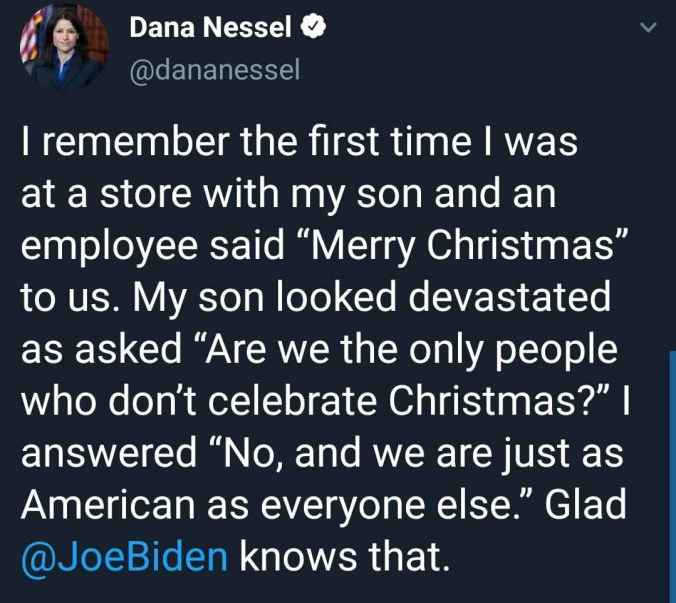 If this woman has raised her child to be “devastated” when someone says “Merry Christmas!”, I think a call to child services is in order. In the alternative, she’s lying, kind of like Jim Parkman’s story about his grandmother.

5. How extreme is the bias and hate against the President? This extreme: Publishers are saying that they might not want to publish Trump’s memoirs because they would be afraid of author protests, staff revolts and incipient “cancellation.” Moreover, “ensuring the book’s veracity could be an even bigger concern.” Ensuring the book’s veracity? In a memoir? Since when is that a concern in any memoir? Who “factchecked” Bill Clinton’s memoir? Hillary’s? Richard Nixon? Obama’s? I’ve read a lot of Presidential memoirs, and all of them contain subjective versions of reality—that’s why memoirs are interesting. Like it or not, Donald Trump has been one of 44 men who served as President of the United States. Publishers denying him him the same opportunity that every single one of those men (who wanted it) had to tell their own version of events is just another manifestation of the effort to deny Donald Trump the privileges and benefits of his office.