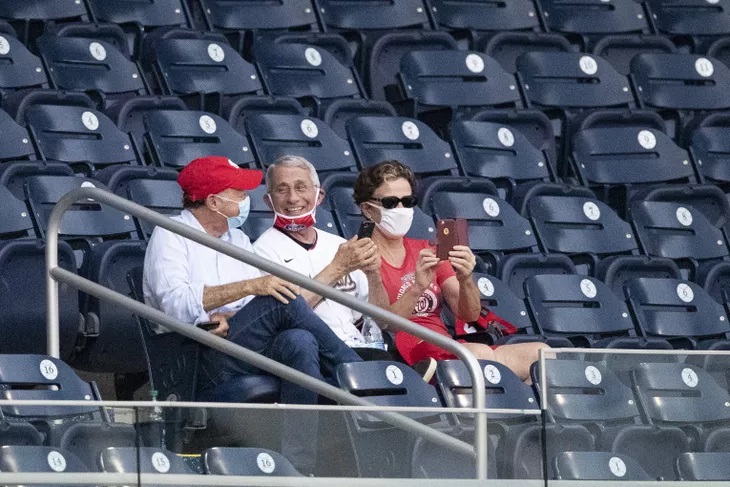 “In the pandemic’s early days, Dr. Fauci tended to cite the same 60 to 70 percent estimate that most experts did. About a month ago, he began saying “70, 75 percent” in television interviews. And last week, in an interview with CNBC News, he said “75, 80, 85 percent” and “75 to 80-plus percent….In a telephone interview the next day, Dr. Fauci acknowledged that he had slowly but deliberately been moving the goal posts. He is doing so, he said, partly based on new science, and partly on his gut feeling that the country is finally ready to hear what he really thinks. Hard as it may be to hear, he said, he believes that it may take close to 90 percent immunity to bring the virus to a halt — almost as much as is needed to stop a measles outbreak.“

No, what is hard to hear, though at this point hardly a shock to anyone with a functioning brain, is that Fauci now admits he’s been lying….you know, “for our own good.”

Don’t heed the spin, the double-talk and the euphemisms: when someone tells you something other than what he or she knows to be true or believes to be true, that individual is deliberately attempting to deceive you by communicating what they believe to be untrue as true. That’s lying. No debate. No defense. That’s what it is, by definition. “I did it for your own good” is a rationalization.

Now, lies can occasionally be judged ethical in according to non-absolutist ethical systems, like utilitarianism. However, lying is not an option for someone who has been held up for almost a year as the epitome of an expert representing “science,” who must be believed and slavishly obeyed by policymakers because, after all, scientists only convey cold hard facts. If that’s the basis for your authority, if that’s the reason the news media and the President-elect lecturing us about the virtues of obeying experts and following what the “science” says, no matter how difficult, painful and counter-intuitive it might be, then a high profile expert cannot, must not, and dare not announce later that he withheld facts for our own good. That’s not the role that we have been told anexpert fills. Not telling the public the truth for the greater good is a pubic servant’s tool, and one that is perilous to use at best. We do not expect politicians to always tell us the truth, and we even accept the troubling reality that sometimes they may be right not to tell us the truth. As Pelt, the character played by the late Richard Jordan in “The Hunt for the Red October” says,

“Listen, I’m a politician, which means I’m a cheat and a liar, and when I’m not kissing babies, I’m stealing their lollipops, but it also means that I keep my options open.“

But scientists, we have been told, over and over again, regarding climate change and the pandemic just to name two of the most egregious examples, aren’t politicians. They deal in facts only. They have no agendas, they aren’t shading or outright hiding the truth to manipulate us. We are told this by people arrogantly treating us like children and fools. Oh, you poor ignorant dolts who a skeptical of what these learned, good men and women know!

Right. Anthony Fauci, the current symbol of the integrity and reliability of science, lied to the public (and probably to policymakers: who can be sure?) by his own admission.

He cannot be trusted. He can never be trusted. And, having been held up as the unimpeachable representative of experts and science generally, they can’t be trusted either.

Of course, the news media will now excoriate him the way they attacked that habitual liar President Trump for admitting that he downplayed the pandemic to avoid panic.

No, of course they won’t. They won’t because just as “science” is too often used as a tool by “experts” to forward their agendas, experts are used as tools by the news media to advance theirs.

15 thoughts on “Ethics Dunce, Rogue And Fool To Be Held Up As An Example Forever More: Dr. Anthony Fauci”