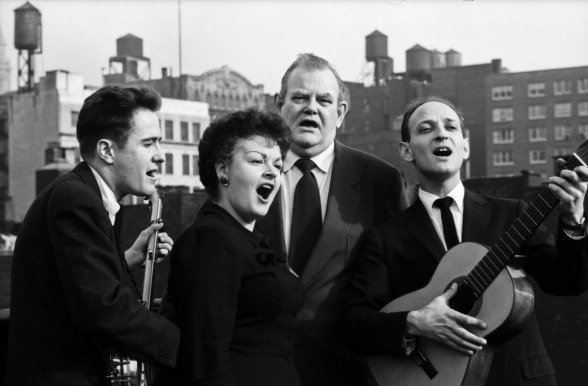 It has become a fad to bid goodbye to 2020 while proclaiming it “the worst year ever.” Of course, and I say of course realizing that most people have no idea why I would say “of course,” one only thinks it was the worst year ever if one doesn’t know much about all the other terrible years, thanks in part to our atrocious education system’s inability to teach either the substance of history or its importance to new generations.

The delusion fits nicely into the Left’s Big Lie that everything was terrible because Donald Trump was President. But as bad as the year behind us was, and there is no question about that, liberty and the identity of America were facing equally dire threats when the nation had been terrified out of its metaphorical gourd by Communist propaganda and Right Wing doomsayers. Luckily for us, “cooler heads prevailed,” but that was just luck. Let’s look back on a largely forgotten incident that occurred on this date in 1962, one of the really bad years.

On January 2, 1962, the reunited folk group the Weavers (Ronnie Gilbert, Lee Hays, Fred Hellerman, and Pete Seeger) was scheduled to appear on The Jack Paar Show. Paar, if his name doesn’t ring a bell for you, was the most quirky and intellectually complex of the “Tonight Show” hosts, and in 1962 had a quirky, intellectually complex hour-long prim -time show on NBC following Johnny Carson’s taking over the late night franchise.

Some perspective is necessary. The Weavers were one of the most popular performing and recording groups of the 1950s, but they were undoubtedly radically Left by the standards of the time. Founder Pete Seeger wasn’t just pro-union; it would be fair to say he was pro-Stalin, in the dreamy-eyed, naive way that other American liberals were (Bernie Sanders comes to mind). But he was a brilliant performer and song-writer, and his group sensibly confined its material to non-political topics: the Weavers’ big hits were “Goodnight Irene,” a #1 record for 13 weeks in the summer and fall of 1950, “Midnight Special” and “On Top of Old Smoky.” But the Red Scare of the early 1950s still hit them hard. During the 1930s when Communism was “in,” the members of the group were all enthusiasts. When news of the pre-Weavers Weavers’ political past got out, they were, in modern terms, canceled. A planned television show was killed. The group’s four members were placed under FBI surveillance. Seeger was grilled by the House Un-American Activities Committee. Decca cancelled their recording contract in 1951; concert venues refused to book them, and their records were pulled from the radio. Two years later, virtually blocked from performing, The Weavers broke up.

But with the disgrace of Joe McCarthy and the waning of Cold War hysteria, they began performing again, though the Weavers never reached the heights of popularity they had attained a decade before. Younger groups and singers inspired by the Weavers, like Bob Dylan, the Kingston Trio, the Seekers and the very similar Peter, Paul and Mary now had center stage. The Weavers were really a nostalgia act by the time they were booked by Jack Paar.

1. Paar had once walked off the “Tonight Show” over censorship, yet he made no such principled stand for the Weavers. It was disappointing, but Jack Paar was nothing if not unpredictable. Even rebels can be intimidated; Paar probably knew this show was his last shot, and wasn’t willing to sink his career for four old pinkos.

2. Imagine a TV network demanding a loyalty oath today. Heck, we have networks that are routinely anti-American themselves.

3. Is today’s social canceling more or less threatening to free speech and political dissent than the more formal censorship of the Sixties? I guess we’ll find out.

4. As with the culture-wide fear of world Communism, today’s cracks in our democratic principles are also the product of fear—fear of a mostly non-fatal virus, fear of violent protests, fear of social isolation for having the “wrong” beliefs. Unlike the Fifties and Sixties, there are far more avenues for dissent today.

5. Lest we forget, 1962 got a lot worse, with the Cuban Missile Crisis in October bring the U.S. and the world to the brink of nuclear destruction. 1963 was no prize either, featuring the assassination of a U.S. President.

8 thoughts on “Ethics Perspective: When The Weavers Had To Sign A Loyalty Oath To Appear On The Jack Paar Show”