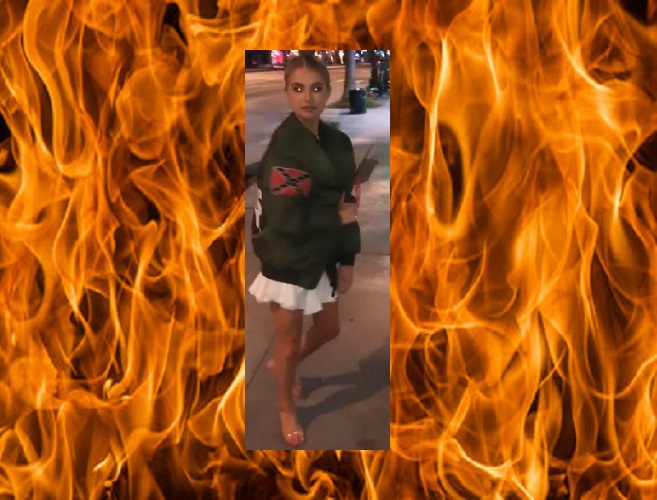 I have never watched “The Bachelor” other than to check in, stay for a few minutes, and decide, correctly, “This is more evidence of the decline of civilization and the uselessness of public education: Get thee to you sock drawer!” This has been the case with most reality shows since the invasive breed made network television unwatchable. I do follow accounts of shows like “Survivor” and, in its day, “The Apprentice,” to be aware when ethics issues surface.

To my horror, I realize this is the third mention of “The Bachelor” here in 2021, which does not bode well, but as is often the case, popular culture, even mind-numbingly stupid popular culture, is often where our cultural canaries go to die. This season of that idiotic show is supposedly a marker of racial progress because “The Bachelor” is black, or sort of black (he identifies as black, or Black). He (Matt James) is a hunk who, like every other “Bachelor” in the NINETEEN SEASONS of this blight on human evolution, has the IQ of a brick, and the exciting premise is that 25 beautiful women who might lose to him in Scrabble compete for his affections.

Dead Canary #1: As soon as a female or minority enters a system of environment in the time of The Great Stupid, large number of vile people who have nothing more promising in their lives but to concoct “gotchas!” that will make life difficult for others will find some evidence of politically incorrect bias, prejudice, or insufficient deference to justify crying “Racist!,” “Sexist!,” “Homophobe!,” “Ablest!,” “Anti-LGTBQ-ist!” or something. Increasingly, this is the price organizations pay for “diversity”: immediate conflict, presumed bigotry, and retribution. Nobody wants to be generous, reasonable, or presume good will or intentions. The whole idea is to grab power by putting others on the defensive. This, of course, makes racial harmony (as well as other varieties) less likely and less achievable, but never mind, the victim-hucksters don’t care. They have too much to gain, or think they do.

Thus, when conservative pundit Megan Fox, who regarded the show as a guilty pleasure, learned that this would be The Season Of the Black Bachelor, she opted out, explaining, “It’s the first time a black bachelor was cast on the show. So, if you thought there wouldn’t be any woke baloney to wade through, you’re nuts. It’s why I didn’t watch it this time. I figured that the woke police would be out in full force, and who needs that in their living room? Certainly, not I.“

Ah-HA! A privileged white woman stopped watching the show because it had a black “Bachelor” for the first time! Megan Fox is a racist!

See how it works?

Of course Fox was right. The first controversy arose when, as I mentioned here (#2), contestant Rachel Kirkconnell was discovered to have attended an antebellum-themed frat party in 2018. This made her the target of unrestrained social media hate and had her tarred as a racist, so, as is the current custom, she grovelled a pathetic apology, sounding like, I wrote, the Manchurian Candidate. (Unfortunately, this thought probably never occurred, or could occur, to Rachel, who like most of the contestants on this show evinces the kind of vacuousness only a lifetime of being assured that her beauty will ensure that she never will have to read a book or engage in any analysis deeper than the problem of which skin products to buy.)

As Fox points out, the party was not white-only (like its historical inspiration), nor did it glorify slavery. Fox writes,

There’s nothing racist about a party at which college kids get drunk in ball gowns. And if that’s racist—dressing up in clothing that was popular during the time of slavery—then cancel [Netflix hist series] “Bridgerton” too. [Black writer/ producer] Shonda Rhimes has a hit on her hands with a show that paints the regency period in England as a utopia. Not only that, but actors of all races are using the time period and fashion to fantasize about a time that was horrific for poor people and minorities. But no one is canceling Rhimes. Only white people get canceled for enjoying the fashions of past eras.

True, but that’s the state of USculure during the Great Stupid.

Dead Canary #2: Double standards rule the day, and logic and ethics will get you nowhere.

Fox found out how big that canary was, when she saw this message in the Facebook fan page for the show: 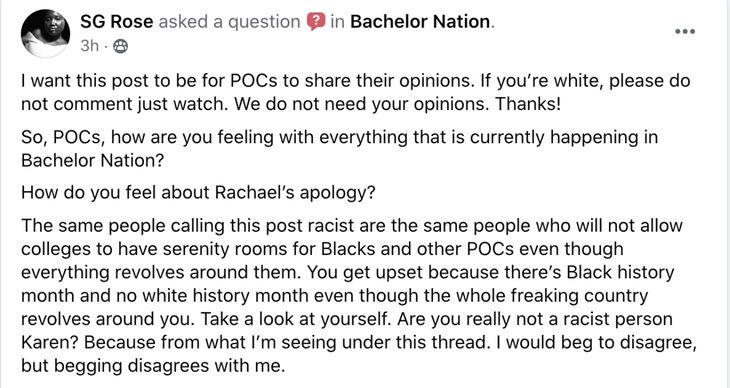 Wow, what an asshole! Fox adds, “People tried to report it to Facebook but Facebook, of course, said it didn’t violate their terms of service, even though it targeted white people based on their skin color.”

Her head-blowingly obnoxious and racist message also introduces the third dead canary, a really, really big one that Ethics Alarms has noted before:

Dead Canary #3: Apologies in response to threatened “cancellation” by the progressive mob are no longer expressions of regret and contrition for actual wrongdoing, but signals of submissiveness and surrender to woke dominance and oppression. 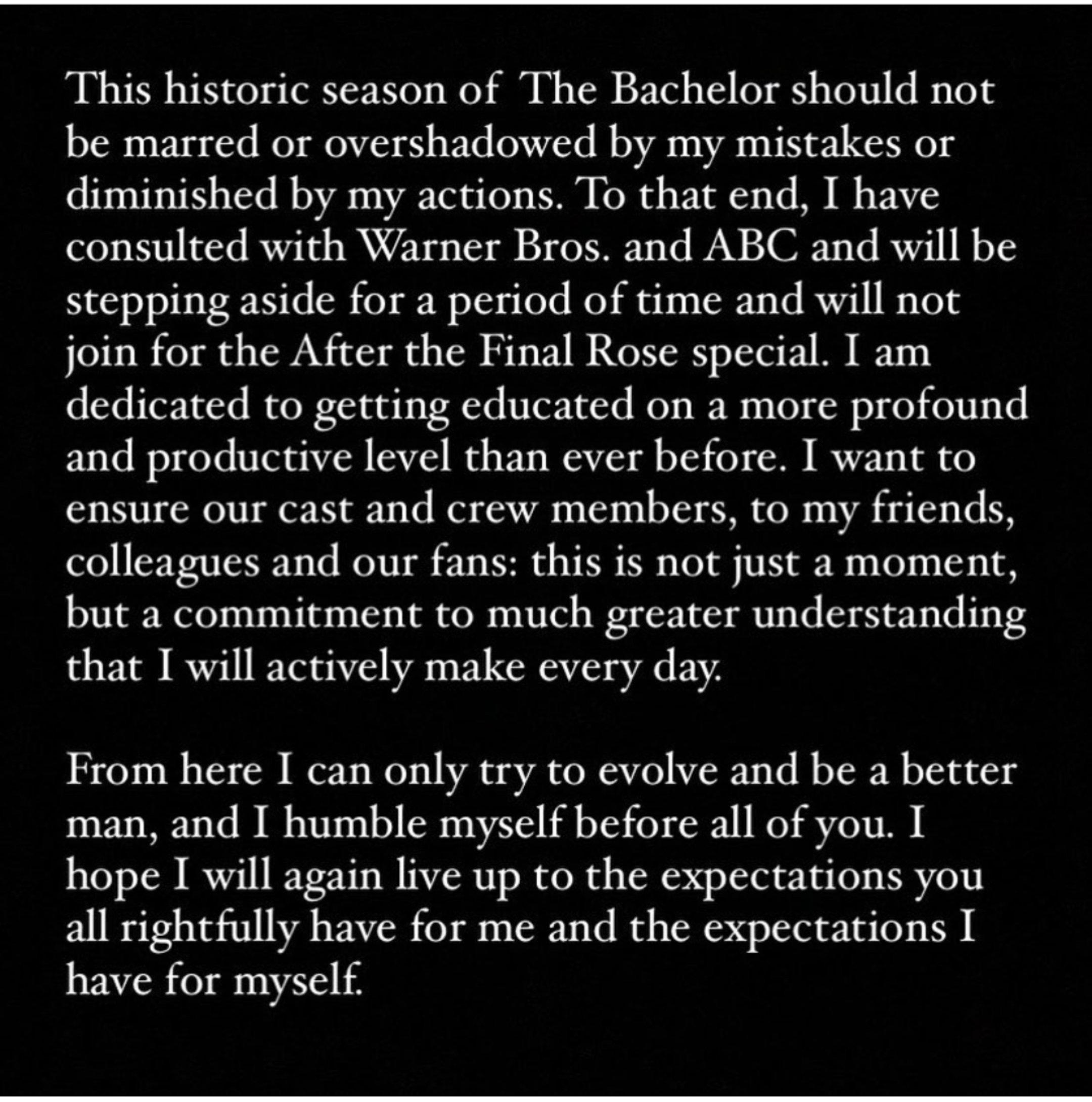 Could Winston Smith have done it any better?

On one hand, Americans who are as fearful, unprincipled and submissive to totalitarian, race-baiting bullies as Harrison deserve to live as second-class citizens. On the other hand, their cowardice encourages and strengthens the censors, the enemies of free thought, and the foes of democracy. There is a duty to confront; there has to be.

Flushed with success, the Woke Mob, “Bachelor Division,” searched for another victim and found one. Demi Burnett , a 25-year-old “Bachelor” alumna, was assailed as yet another racist after an old photo of her wearing a jacket with the Confederate flag on the sleeve was posted online yesterday. So she rushed to grovel, saying in two videos,

“So, there’s been this picture that’s been resurfaced of me wearing a jacket that had a Confederate flag on it. That jacket was given to me by my ex, his dad actually gave it to me, and I had no idea the weight that the Confederate flag held whenever I was wearing it. I just wore it for that one night, and it was a Yeezy jacket, I thought it was so cool. I was like, ‘Yeah, Yeezy.’ [NOTE:Yeezy is Kanye West’s brand. He’s black, in case you didn’t know.] I didn’t even pay attention to that…That’s ignorance. That’s ignorant of me not to pay attention to the Confederate flag. Even more ignorant of me to not even know how harmful that is to people.”

Saying that she”royally fucked up wearing that,” she continued,

Is that enough, everybody? Will you forgive me now for wearing a jacket designed by a super-star black rapper, who obviously was setting a trap for poor little white girls like me?

“I genuinely had no idea what I was representing by wearing the jacket. I have no excuses, other than ignorant, self-absorbed sack of shit. Disgusted with myself. I suck for that. I suck very badly for that. I know better now. Did not know better then. Don’t look up to me. Look up to being better than me, ’cause I fucking suck and I really fucking hate myself for being ignorant. This is the time to change the world, make it better and I made it worse. So I’m really, really sorry.”

Post script: After the epic grovel, one person tweeted, “Where’s your apology for saying the n-word?”