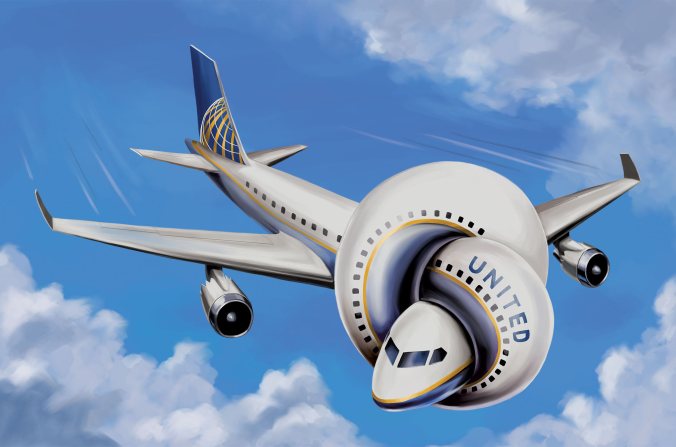 Not surprising, at least to me, the carrier (in multiple senses of the word) is United, long recognized by travelers as an incorrigible ethics dunce. The latest from United, however, announced in a head-exploding tweet, is special. The airline announced,

“Our flight deck should reflect the diverse group of people on board our planes every day. That’s why we plan for 50% of the 5,000 pilots we train in the next decade to be women or people of color.”

Wait: who says the flight deck crew should reflect the demographics of the passengers? Why would anyone but a fool say that? Is there really any air traveler who cares about any characteristic of the pilot and co-pilot other than that they be the best qualified people available to fly the plane safely and deal with whatever crisis that might occur?

I know I don’t care what color, gender or ethnic group my planes’ pilots belong to. Why would I? Do you? Does any sane traveler think as they hurtle groundward, screaming, “Well, if we crash, at least it will be because the airline met its diversity quota!”

“United Airlines Announces They Will No Longer Hire the Best Pilots“

Is that headline fair? I think it is pretty fair: the company appears to say that skill and experience in flying a plane will no longer be its top priority in selecting pilots, and the message it clearly wants the public to receive—because they have utter contempt for the public’s intelliegnce— is that diversity is now its top priority, not flying. If diversity is the top priority, then safety and the best quality pilots cannot be. Similarly, when Joe Biden made it known that his Vice-President would be chosen from the group of “female Democrats of color” rather than “people qualified to be President of the United States,” he and his party were saying that group membership was more important than competence and trust.

But United, being United, is doing something else. On the website, we get this intentionally vague deceit:

Today, United has one of the most diverse pilot populations of any U.S. carrier with nearly 20% of our pilot group made up of women and people of color. We are working toward raising that number even higher by partnering with diversity-led organizations and continuing to remove gender and racial barriers. And we’re going one step further with plans for 50% of United Aviate Academy students being women and people of color to ensure our students reflect the diversity of the customers and communities we serve.

Let’s break that down, shall we?

“Today, United has one of the most diverse pilot populations of any U.S. carrier”

“…with nearly 20% of our pilot group made up of women and people of color.”

What’s a “pilot group”? What’s the relative experience of this group? Who is considered “of color”? Why is gender and ethnicity combined? Is the goal is to have 50% female pilots, or not?

“We are working toward raising that number even higher by partnering with diversity-led organizations and continuing to remove gender and racial barriers.”

Yeah, and I’m “working toward” being King of the World. How does “partnering” accomplish anything? Does it mean that people without expertise in flying will be involved in choosing pilots? If not, what does “partnering” mean? What does “diversity-led” mean? Is that even English? What “racial and gender barriers” does this refer to? More males than females tend to want to fly planes: what are you going to do about that? Force women to be pilots? How is this any different from the NBA announcing that it will “continue to remove gender and racial barriers to playing NBA basketball?

Oh! Plans! “Plans” means nothing, and United knows it. Barack Obama “planned” to reduce the national debt. Yay. What is the ETA of the pay-off for these “plans”? What will be the consequences of missing that goal, or never reaching it?

“…to ensure our students reflect the diversity of the customers and communities we serve.”

United’s customers do not have the same demographics as the nation as a whole, not even close. Most Americans seldom fly; if they fly a lot, they are wealthy, have a lot of leisure time, and are flying for business. Poor people don’t fly. Unemployed people don’t fly. The tweet says that the demographics of the flight deck should match the group of passengers. This statements adds “the community” United serves. Both are overwhelmingly white, male, and wealthy; also urban and college educated.

Upon examination, United is just virtue-signaling without promising anything. They can’t promise anything, because that would be installing a race and gender quota, which is discrimination, and illegal. The carrier is also deliberately leaving the impression that it really will value personal characteristics over experience and skill, because that’s what the ascendant woke mob wants (unless, of course, they are on a plane in trouble.) Then they wouldn’t care if a trained porpoise–a white, male porpoise— were flying the plane as long as it was the best pilot for the job.

We always knew that United was rude, high-handed and administrative inept. Now we know they are also dishonest and shameless, trying to deceive the gullible and brainwashed that they really will hire pilots based on their shade and gender, while knowing that they can’t do any such thing.

16 thoughts on “The Great Stupid Is Airborne!”