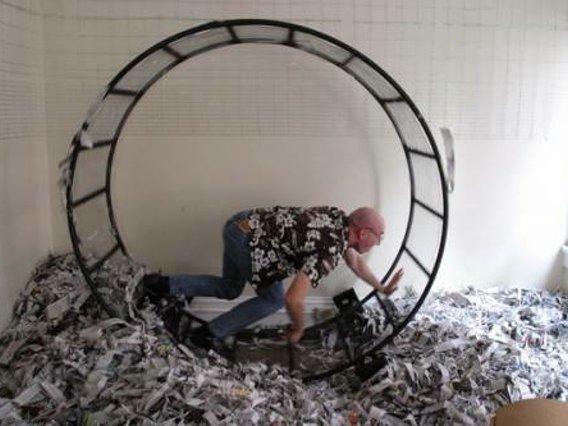 That’s not me, by the way. I would never wear a shirt like that…

1. Not substantiated, but worth mentioning: Fulton County, Georgia, poll manager Suzi Voyles says that when she sorted through a stack of mail-in ballots last November, she noticed strange uniformity in the markings on ballots favoring Joe. Biden. All the absentee votes contained perfectly filled-in ovals for Biden, except that each of the darkened bubbles featured an identical white space inside them in the shape of a tiny crescent, indicating they had been marked with toner ink instead of a pen or pencil. All of these ballots were printed on different stock paper than the others she handled as part of a statewide hand recount of the 2020 Presidential election, and none were folded or creased, as mail-in ballots usually are. To her, the Biden votes looked like they’d been duplicated by a copying machine. At least three other poll workers observed the same thing in stacks of absentee ballots for Biden they handled, have joined Voyles in swearing under penalty of perjury that they something was—is—seriously amiss. A state judge has ordered that all of the 147,000 mail-in ballots counted in Fulton be unsealed to allow a closer inspection of the Biden ballots for evidence of counterfeiting. Observations:

2. Accountability Ethics, Baseball Division. The last two nights, the Houston Astros were booed lustily in Boston by fans indignant about that team’s cheating in 2017, including during a close play-off series with the Red Sox on the way to the Astros’ World Championship. There’s a disconnect here: the primary villain in the cheating scandal is the current Red Sox manager, Alex Cora, who engineered the sign-stealing scheme the team used to help it’s hitters all season. Cora, of course, hasn’t bee jeered at all. Alex said that the booing of his former team made him uncomfortable. Good! He told the press after the game in part,

“Tough to hear it. Because at the end, I was part of that. I was part of the 2017 Astros, and I was part of the whole sign-stealing situation and them being booed and screamed at … I was part of that, too. I know there’s a lot of people in this town who are fans of the Boston Red Sox that don’t agree that I’m the manager [Note: Like me…] There’s others that yeah, they’re OK with it and others, they’re just happy that we have this [winning] record. But that was something I was wondering for a while — how people were going to treat them — because at the end, we were part of it. [Clarification: Not “part of it,” Alex. You were the instigator of it.] Me and [current Red Sox player] Marwin [Gonzalez] were part of that, and it was a tough one last night. When I got home, I thought about it. I was like, ‘Wow.’ It was tough. It was a tough night.”

Not tough enough. I also liked how he threw his own player under the metaphorical bus. Most Boston fans had forgotten that Gonzales, now with the Sox , was one of the Astros’ sign-stealing cheats. I’m sure he was happy to hear his manager remind everyone in his new city.

3. I have sympathy for Ellie Kemper, but in the end, she’s just another prostrating weenie. There was some discussion in the Open Forum of the plight of Ellie Kemper, a relatively obscure TV actress who has been mercilessly attacked by the social media Wokeness Police. The actress and comedian from “The Office” and “The Unbreakable Kimmy Schmidt” was branded a “KKK Queen” by the (reliably despicable) Daily Beast and on social media based on nothing, a debutante ball in St. Louis that Kemper attended as a teenager over 20 years ago. Then Twitter—which is evil, and if you are still on it, you’re an accomplice—put the gossip on their “What’s happening” sidebar of trending topics. The event she attended while just out of high school, The Veiled Prophet ball, is an old St. Louis tradition. The ball was initiated in 1878 by a Confederate veteran, but neither he nor the ball had any link to the Klan. It now survives, stripped of some traditional plantation silliness, as a Fourth of July party. Ellie did nothing wrong when she was 19 but groveled anyway, begging for forgiveness from nobody she owes an apology to for a crime she didn’t commit.

“Hi guys – when I was 19 years old, I decided to participate in a debutante ball in my hometown. The century-old organization that hosted the debutante ball had an unquestionably racist, sexist, and elitist past. I was not aware of this history at the time, but ignorance is no excuse. I was old enough to have educated myself before getting involved. I unequivocally deplore, denounce, and reject white supremacy. At the same time, I acknowledge that because of my race and my privilege, I am the beneficiary of a system that has dispensed unequal justice and unequal rewards.There is a very natural temptation, when you become the subject of internet criticism, to tell yourself that your detractors are getting it all wrong. But at some point last week, I realized that a lot of the forces behind the criticism are forces that I’ve spent my life supporting and agreeing with.I believe strongly in the values of kindness, integrity, and inclusiveness. I try to live my life in accordance with those values. If my experience is an indication that organizations and institutions that fall short of these beliefs should be held to account, then I have to see this experience in a positive light.I want to apologize to the people I’ve disappointed, and I promise that moving forward I will listen, continue to educate myself, and use my privilege in support of the better society I think we’re capable of becoming.“

If only I watched something she was in so I could boycott her. Until Americans make certain that celebrities and other grovelers suffer for siding with the censors and totalitarians like this, the anti-democracy, pro-racist forces now threatening the culture and our basic liberties will grow stronger.

I’m sorry you don’t have the character to be an American, Ellie, but to hell with you. You’re a disgrace to your country.