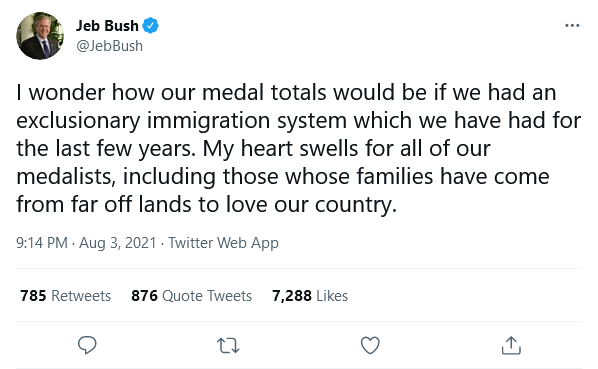 2. This is why public figures, celebrities, politicians, journalists, academics and lawyers are irresponsible to send tweets. Twitter makes you stupid, and if you are already stupid, it lets everybody know.

3. Nobody should care about medal totals, other than the fact that the nation spends far too much money on preparing for the Olympics, and its a rough way to gauge how well the funds are being spent. The U.S. should care about the way its athletes comport themselves, and the character they demonstrate to the world.

4. Surely Jeb isn’t suggesting that national policy regarding immigration or indeed anything should be influenced by the results in the Olympics. Because that would really be stupid.

5. What is Bush advocating? “The last few years” we have excluded (or tried to exclude) those who crossed our borders illegally, as well as those seeking refugee status from nations with significant terrorism activities.

6. Even if we had open borders “the last few years,” none of the immigrants who came here could have qualified for citizenship in time to compete in the Olympics. Does Bush not understand the process?

7. I’d get that heart-swelling problem looked at, Jeb.

8. For those who sweat over such trivial things, the U.S. medal count is fine. It leads in medals, and is second in gold medals.

That’s reading too much into a dumb tweet Jeb probably shot off without thinking it through. Having more immigrants, see, would mean a bigger pool of great athletes for the US to choose from…if you ignore citizenship requirements of course. That’s what Jeb was “thinking.”

10. We should be grateful to Jeb for helping to explain for those who haven’t figured it out yet how Donald Trump crushed the GOP establishment in 2016. This tweet represents the quality of thought of the man the party thought was its frontrunner for the Presidency. Wow.