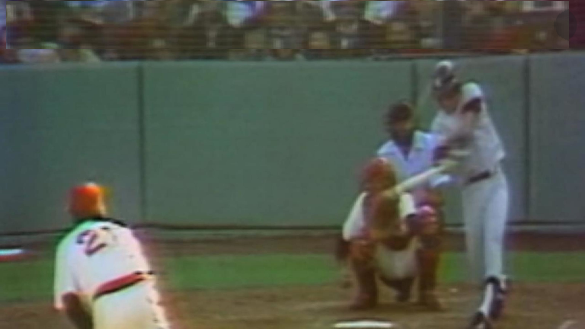 Tonight, at 8:00 pm, the American League Wild Card game will commence featuring the New York Yankees playing the home town Boston Red Sox in Fenway Park. After a back and forth, up and down season for both teams, they ended up with exactly the same record, 92-70. The two top non-division winning teams in both MLB leagues have to play one game elimination contests to gain admission to the Divisional Playoffs regardless of their records, but in this case, the game is also a tie-breaker.

For me, and based on the sports columns, for a lot of people, tonight’s game brings back a flood of memories. Almost exactly 43 years ago, on October 2, 1978, light-hitting Yankee shortstop Bucky Dent (that’s Bucky Fucking Dent in Boston, and forever) hit a cheap, pop-up three-run homer over Fenway Park’s Green Monster in the seventh inning, giving NY a lead against the Red Sox that they never relinquished despite several more twists of fate. Now, once again, the two long-time rivals—Boston sold Babe Ruth to the Yankees, you know—have a one-game date with destiny. But this is an ethics blog, so the topic is not my PTSD flashbacks over that game, but the ethical significance of the conflict I faced on October 2.

That year, 1978, I followed the harrowing race between the New York Yankees and the Red Sox openly and prominently. Everybody knew my passion and devotion, and not just because I wore a Boston Red Sox 1975 batting helmet at work every day for almost a month. (The Red Sox had pulled off a crucial come-back win against Toronto while I was at a September Orioles game, right after I had purchased a Red Sox souvenir helmet. I concluded that the plastic hat was the reason the Sox had won, and resolved at that moment to wear the thing until the end of the season.

I loved that particular Red Sox team and especially how it was battling the despicable Yankees of the Seventies, with Billy Martin as its in-and-out manager and George Steinbrenner as owner. I had missed seeing, listening to or attending only a few games since I was 12, so following the season closely was business as usual, but the ’78 season was especially epic. Boston had looked like it would triumph in a breeze, leading the Yankees, the 1977 World Champs, by 14 games in July. Then New York came roaring back while the Red Sox dissolve in an acid bath of injuries. By the end of September, with eight games left, Boston was three games behind the Yankees. Thanks to my helmet, however, the Sox won all eight, the Yankees lost three games, and the season ended in a tie. A historic, one game tie-breaker play-off to determine the AL East Division winner was scheduled for 1 PM on the same Monday that Georgetown University’s Development Office, which employed me at the time, was having a special, must-attend all-day, 9 am-6 pm meeting, including the President of the University, Tim Healy.

I viewed this then and view it now as an ethics conflict. I had a duty to Georgetown, but also a duty to the Red Sox, who had provided me with so much enjoyment, perspective and wisdom since I was a child. It was an easy call; like so many decisions in my life, I made it quickly, almost on the spot. At noon, I stood up, still wearing my batting helmet, and announced to the distinguished group that the Drirect of Development for Georgetown Law Center would not be able to be with them for the rest of the day, because the Boston-New York play-off game would be starting at 1 PM in Fenway Park, and that I, naturally, was going home to watch it. The expressions on some of the faces (except for that of my future wife, then the Director of Corporate and Foundation Giving, who was smiling) resembled those of the audience in “The Producers” after the conclusion of the title number in “Springtime for Hitler.” Then I left.

It was an epiphanal moment for me. I realized then, and forever, that a job, income, security, and all those imply were not my primary priorities, and would not necessarily prevail when difficult choices loomed in my life. That is how I ultimately arrived at ethics as a profession. It is also how I came to spend 20 years building and guiding a professional theater company that only preformed plays and musicals that the local theater critics sneered at for exploring old-fashioned values and issues.

I could not work for any employer that couldn’t or wouldn’t understand, accept and respect my priorities. Eventually, this meant that I had to be self-employed. As for Georgetown, my departure from the meeting was never mentioned. It was as if it never happened.

The 1987 game itself, as has often been the case with baseball, was in important ethics lesson itself, as good an example as I’ve ever seen of how chaos and moral luck rule our fates. Human beings can only try to be ethical and courageous, putting forth their best efforts without yielding to the delusion that fairness, success and justice will necessarily prevail. That way madness lies, as King Lear observed.

4 thoughts on “Recalling The Day I Realized My Ethical Priorities”