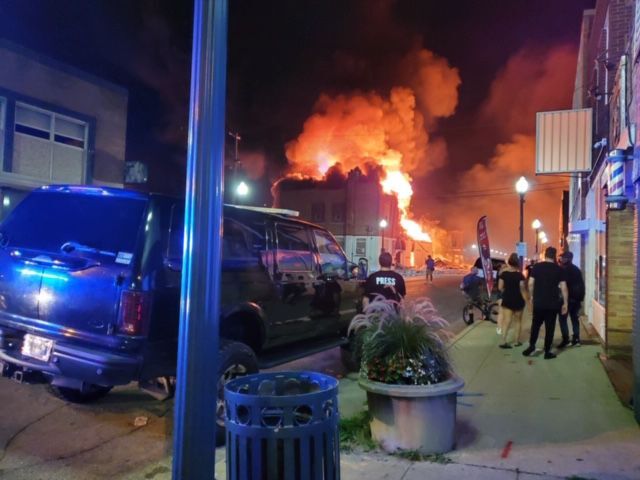 I could write about six freestanding posts about this incident, the resulting trial, and the nauseating news media spin being placed on the matter from both sides of the political spectrum. I, however, have a limited attention span for people and events this annoying. Two will have to do.

To begin with, this whole fiasco arose out of the Kenosha, Wisconsin, Black Lives Matter rioting, easily the least defensible of all last summer’s uprisings over presumed racism where there was none. It’s a close contest, with the Briana Taylor riots in Louisville and the Atlanta rioting over the jerk killed at the Wendy’s after he tried to shoot a taser at a cop, running close behind. But the riots over the shooting of Jacob Blake were even less justified than these, and no rioting is ever justified. Blake was a felon, he was in the act of a crime, he was harassing his alleged rape victim, he was armed, and he was placing children in peril. He should have been shot, and his race was irrelevant. Never mind: both the NBA and Major League Baseball allowed players to engage in one-day strikes over the incident, though they didn’t know the facts. Ugh.

Rittenhouse, meanwhile, deserves some sympathy, but not much. He is a teen, and teens, males especially, have malfunctioning brains (trust me, I know this). Still, even a malfunctioning brain should be able to figure out that walking into a riot carrying a rifle is literally—meaning literally—asking for trouble. He says he was protecting his neighborhood—well, he was being an idiot. That’s not his job. Too many conservatives in print and otherwise have called him a hero. Being irresponsible and reckless (as well as illegally possessing a firearm) is not heroic. Remember the Ethics Quote from yesterday? “There is no such thing as doing the wrong thing for the right reasons. It’s just the wrong thing.”

OK, Rittenhouse “meant well.” I don’t care: he still need to be punished, and the message needs to be sent, loud and clear, that anyone not a police officer deliberately intervening in a riot with a firearm will be prosecuted. (The message also needs to be sent, similarly clearly, that rioters will also be prosecuted, even if they are part of the Democratic Party’s “base.” But that’s a separate issue.)

The prosecutors breached ethical standards in charging Rittenhouse with murder. This was a political prosecution, and heads should roll for it. They ignored the evidence that strongly indicated self-defense, because Black Lives Matter enablers want Rittenhouse to metaphorically hang in the public square as a warning to anyone challenging the group’s power. The media, meanwhile, is cheering the hanging on as the current trial proceeds because the media has lost all objectivity and prudence.

I suspect that the bad guys will lose this time. That still doesn’t make Rittenhouse a hero.