Having reviewed the depressing small population of Ethics Heroes in this Ethics Wreck in Part I, I’ll largely leave the determination of which of the following ethics miscreants should be designated as dunces, villains or fools (or all three) to you. In this, I take my lead from the Saturday Night Live game show, “Geek, Dweeb or Spazz?”

However, there are some easily identified Ethics Villains, beginning with

1. The President of the United States, who signed this official statement:

While the verdict in Kenosha will leave many Americans feeling angry and concerned, myself included, we must acknowledge that the jury has spoken. I ran on a promise to bring Americans together, because I believe that what unites us is far greater than what divides us. I know that we’re not going to heal our country’s wounds overnight, but I remain steadfast in my commitment to do everything in my power to ensure that every American is treated equally, with fairness and dignity, under the law.

I urge everyone to express their views peacefully, consistent with the rule of law. Violence and destruction of property have no place in our democracy. The White House and Federal authorities have been in contact with Governor Evers’s office to prepare for any outcome in this case, and I have spoken with the Governor this afternoon and offered support and any assistance needed to ensure public safety.

Biden’s not just a weak and addled President. He’s a two-faced, mean-spirited creep.

The rest of the Rittenhouse Rogues Gallery members who can be comfortably designated as Ethics Villains:

Go ahead, tell me again with a straight face that Democrats haven’t embraced totalitarianism. Now jurors, judges, lawyers and defendants have to worry that if the verdict in a fair trial doesn’t fit into the ruling party’s ideological agenda and please its constituency, they will face Federal investigations and threats of “consequences.” Nadler called for the Justice Department to review the Kyle Rittenhouse case after a jury found Rittenhouse not guilty on all charges. If lackey Merrick Garland could be sicced on concerned parents by a bunch of race-obsessed school boarsd, do you think he’ll show some spine in the face of a demand by a ranking Democratic Congresman

Nadler, who has been one of the worst, most hypocritical and hyper-partisan House members in U.S. legislative history, blathered, “This heartbreaking verdict is a miscarriage of justice and sets a dangerous precedent which justifies federal review by DOJ. Justice cannot tolerate armed persons crossing state lines looking for trouble while people engage in First Amendment-protected protest.” 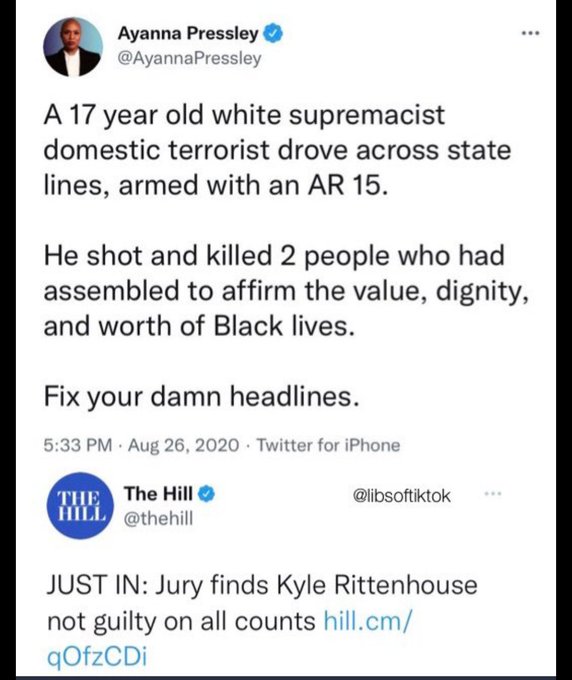 Pressley was one of the women President Trump unwisely said should “go back where they came from.” That would be, I suppose, in Pressley’s case, Hell:

I’d remind Newsom that in the glass house that is California, where the message was sent that a black celebrity can brutally murder his white wife and her friend and get away with it by playing the race card, throwing such a rhetorical rock is absurd. But never mind that:

6. The American Civil Liberties Union (and this is why everyone should stay off Twitter, which clearly provokes early inset senility) which tweeted this disgraceful thread…

The ACLU might be the worst villain of them all. As Robby Souve archly noted at “Reason,” “The ACLU thinks Kyle Rittenhouse’s civil liberties got too much protection.” The tweets represent a total betrayal of the what are supposed to be the core values of the organization, plus…

One might have expected that an organization dedicated to the preservation of civil liberties would not so cavalierly take the side of prosecutors against the concept of self-defense. In the past, the ACLU has done terrific work shining a light on prosecutorial misconduct—the tremendous power the state has to stack the deck against defendants. The ACLU purports to believe that all people, even the guilty, deserve due process protections. The organization is evidently outraged by the verdict: Is the ACLU outraged that the prosecutor tried to argue that Rittenhouse exercising his Miranda rights was evidence of his guilt?

I’m going to reluctantly cut off the “villains” list at six. The final section will present the rest.

No further commentary is necessary after this tweet by the alleged news organization..