In a classic of ethics duncery, Rachel Sillcocks and Kristina Liedags Compton, co-owners of popular San Francisco restaurant Hilda and Jesse, assumed last week that they could profitably engage in blatant anti-police bigotry and firearm phobia in San Francisco, which long, long ago abandoned common sense and logic for the outer frontiers of progressive mania. By the end of the week, it was clear that the Old Knight had a bead on the situation…

They began by kicking San Francisco police officers out of their restaurant. Here’s their explanation, posted on social media:

The statement is moronic and unethical on its face, for it is transparently hypocritical, bigoted and insincere. The owners cannot simultaneously “respect” and be “grateful” for the work the police do while maintaining that they are not welcome in their establishment unless they abandon the tools they need to do that work, and the uniforms their job requires them to wear while they do it. Nor does it make sense to announce that the public servants whose job it is to keep the pubic safe make the restaurant’s owners and staff feel unsafe, yet still maintain that the owners appreciate their role.

It is obvious what was going on here: Sillcocks and Compton were pandering to Black Lives Matter anti-police bigotry while simultaneously insisting that they were not. Silcock’s “clarifying” follow-up tweet when the coverage of their offensive conduct turned negative was even more damning… 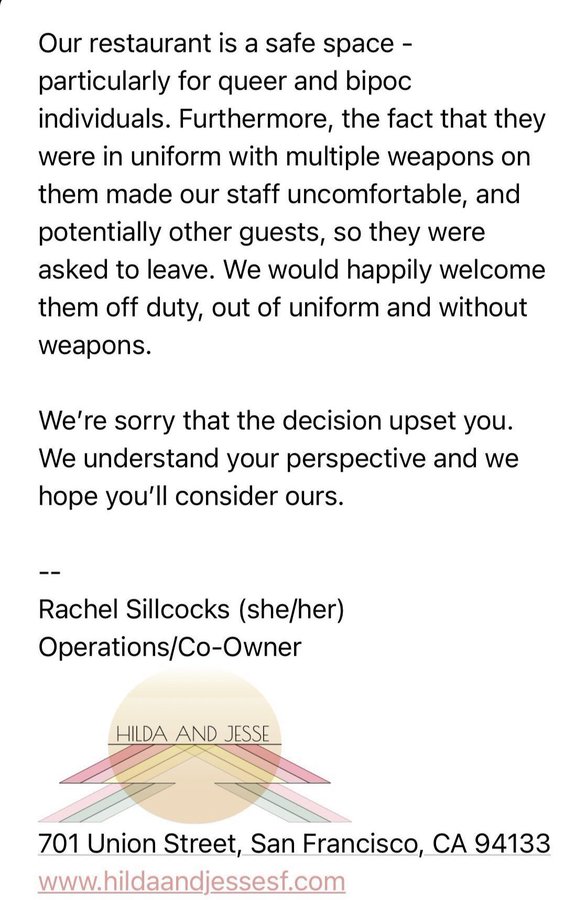 (Incidentally, Ethics Alarms will henceforth presume that anyone who appends their preferred pronouns to their name under any circumstances is an unthinking woke mob-following dolt who would jump out of a window if Progressive High Command said to.)

Now we know that the restaurant’s owners think that police are hostile to gays, blacks and other groups. But of course Rachel and Kristina respect what the police do! Or is the staff uncomfortable because they are running a drug ring, or have a rotting dead waiter stashed behind the dishwasher? I’m uncomfortable around police cars right now because I’m late getting my license plates updated.

Well at least Sillcocks and Compton have the courage of their convictions, regardless of how cretinous and contradictory those principles (or whatever they are) may be. No, actually they don’t. As their eatery’s Yelp score dived to a single star out of five, and they were buried by comments like this…

This is a “safe” space.
One that you can not come to when your job is to keep people safe.
This is a “weapon free” zone.
But they don’t realize everything from the fire extinguisher on the wall to the chef’s knife becomes a weapon.
This establishment is “free of discrimination”, but it refuses to seat/serve certain people.
Since weapons make them uncomfortable they need to turn in their knives to law enforcement  and only cook with spoons. No weapons allowed!
Owners and managers should be ashamed of themselves.  Investors need to pull their money and this place needs to be boycotted.

…the owners began to doubt their marketing strategy.

They may be crazy in San Francisco, but they’re not stupid.

Suddenly, Sillcocks and Compton, within the span of just a few days, decided that they didn’t believe what they had so fervently claimed to believe because it was likely to cost them money, so they issued this “apology”:

On the Ethics Alarms Apology Scale, this is a Level 10, “an insincere and dishonest apology designed to allow the wrongdoer to escape accountability cheaply, and to deceive his or her victims into forgiveness and trust, so they are vulnerable to future wrongdoing.” The translation is crystal clear: “Oops! We thought insulting and mistreating the police when they are under attack all over the country would be popular, but it looks like we miscalculated. That was obviously a mistake, but it’s all the fault of these ‘stressful times,’ not the fact that we’re bigoted fools. Do over!“

If I were a San Francisco crook, I’d strongly consider a hit on Hilda and Jesse as soon as I could work out the details. If I were a law-abiding restaurant-goer, I’d consider that boycott to be still in effect.

And if I were a police officer, I’d be sorely tempted to stay as far away from the restaurant as I could, with all that implies. I certainly would never attempt to dine there again. Presumably the police department’s dedication to protecting businesses and their patrons will not wain when Hilda and Jesse needs police protection, because the officers are professionals. They can be trusted, even though Rachel Sillcocks and Kristina Liedags Compton cannot.

39 thoughts on “Virtue-Signaling Gone Wrong: The Hilda and Jesse Debacle”