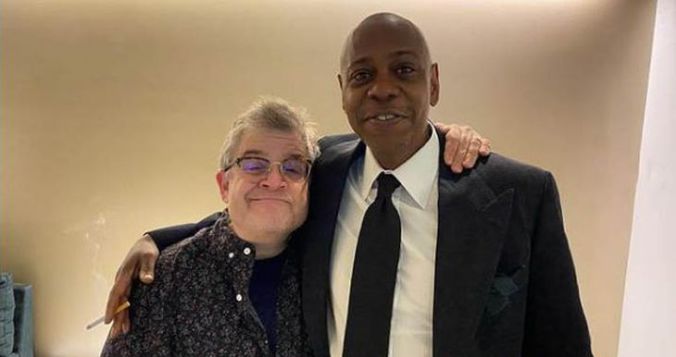 For the first Ethics Quiz of the new year, consider Patton Oswalt. The gnomish comedian and left-wing wit has long been on my hate list, not for his work, for he is extremely sharp and often very funny, but out of envy: he managed to snag the heart of lovely actress Meredith Salenger, his wife and one of my all-time Hollywood crushes, despite Oswalt looking like a nuclear accident victim. But that is neither here nor there.

What is here and now is this: Oswalt had posted photos memorializing a nice gesture by long-time friend Dave Chappelle on New Year’s Eve. Oswalt, who was doing small show in Seattle (he mostly does small shows, which explains why you may not have heard of Patton Oswalt) got a spontaneous call from Chappelle to come over to the nearby stadium and join him in Chappelle’s huge show. Oswlat wrote gratefully on Instagram,

“I waved good-bye to this hell-year with a genius I started comedy with 34 years ago. He works an arena like he’s talking to one person and charming their skin off. Anyway, I ended the year with a real friend and a deep laugh. Can’t ask for much more.”

Of course the social media mobs took after him for being a friend of that anti-trans bigot Chappelle. First, Oswalt took down all the hate posts, and then felt compelled to explain himself, writing,

I saw a friend I hadn’t seen in a long time this New Year’s Eve. We’ve known each other since we’re teens. He’s a fellow comedian, the funniest I’ve ever met. I wanted to post a pic & an IG story about it — so I did. The friend is Dave Chappelle. Thirty four YEARS we’ve been friends. He’s refocused and refined ideas a lot of us took as settled about race & history & Life On Planet Earth and spun them around with a phrase or punchline. We’ve done bad & good gigs, open mikes & TV tapings. But we also 100% disagree about transgender rights & representation. I support trans peoples’ rights — ANYONE’S rights — to live safely in the world as their fullest selves. For all the things he’s helped ME evolve on, I’ll always disagree with where he stands NOW on transgender issues. But I also don’t believe a seeker like him is done evolving, learning. You know someone that long, see the struggles and changes, it’s impossible to cut them off. Impossible not to be hopeful and open and cheer them on. Also, I’ve been carrying a LOT of guilt about friends I’ve cut off, who had views with which I couldn’t agree, or changed in ways I couldn’t live with. Sometimes I wonder — did I and others cutting them off make them dig their heels in deeper, fuel their ignorance with a nitro-boost of resentment and spite?

This is, if nothing else, honest, thoughtful and provocative. Patton is a thinking comedian. But then he felt that he had to apologize while declaring his LGBTQ bona fides:

I’m an LGBTQ ally. I’m a loyal friend. There’s friction in those traits that I need to reconcile myself, and not let cause feels of betrayal in ANYONE else. And I’m sorry, truly sorry, that I didn’t consider the hurt this would cause. Or the DEPTH of that hurt. I’ve been messaging a lot on IG today, and the back and forth has really helped guide me in the writing of this. I (naively) deleted a lot of posts in the comment thread — critical ones from LGBTQ writers AND shit-posts by TERF/anti-trans orcs looking for clicks & giggles. I wanted a “nice comment thread” about the pic with my friend. Ugh. So easy to think someone ELSE needs growth and miss the need in yourself. Gonna keep trying.

So after saying how happy he was to end a bad year with his good friend Dave Chappelle now he’s sorry he didn’t consider the hurt having such a friend would cause? I mean, maybe people shouldn’t be demanding you stop being friends with a guy you’ve known for 34 years because they don’t like his opinions. Maybe that’s as far as this needs to go? Instead, Oswalt feels the need to spend the day apologizing to the people who crapped all over his nice moment with their complaints about what a bad person he is for having Chappelle as a friend…If an old friend does you a favor you don’t apologize for knowing them.

In “Silverado,” corrupt sheriff Brian Dennehy unceremoniously fires his saloon manager because an old friend, played by Kevin Kline, has come to town and the sheriff/saloon owner/bully wants him to have the job. The fired man objects and draws his pistol, so Dennehy shoots him dead with nary a shrug of regret. A cowboy who had just befriended Kline’s character asks him, eyebrow raised, “You used to ride with that guy?” The implication: maybe you’re not the good guy I thought you were.” (Kline turns out to be a good guy after all, however, to Denehy’s sorrow.)

Was it unethical—cowardly, disloyal—for Oswalt to apologize on social media for expressing his appreciation of a friend’s kindness?