1.  An animated TV show’s demonstration of support for an invaded nation is, of course, as useless as Michelle Obama’s infamous frowny face “Bring back our girls” photo, and is naked virtue signaling. Still, the hostility to the show for the gesture displayed by ultra-conservative Citizen’s Free Press readers is remarkable.There can be no ethical basis for not supporting Ukraine, or any country Russia invades, or any peaceful nation any country invades. Representative reaction: “Russia = Evil, Because: Trump. Thus, Ukraine isn’t an UNBELIEVABLY CORRUPT FAILED STATE… Ukraine is Saints. Might want to be somewhat skeptical and cynical when Biden, the MSM, and Hollywood is all trying to brainwash everyone into being pro-Ukraine, huh?” Wow. I didn’t know Tucker Carlson had this much influence.

It is a all a necessary reminder that the far right is just as unhinged as the far Left, just less totalitarian (for now).

2. Apparently not “the best version of the truth“… NY Post Columnist Michael Goodman wrote before the invasion,

There are other stories making the rounds…One has it that Trump — noting that Putin seized land from Georgia when George W. Bush was president and seized the Crimean peninsula when Barack Obama was president — warned Putin against a land grab on his watch.

“If you move against Ukraine while I’m president,” Trump is said to have told the Russian leader, “I will hit Moscow.” Putin reportedly scoffed, “No way,” leading Trump to say, “All those beautiful golden turrets will be blown up.”

[Also] Trump reportedly told Xi that any military move against Taiwan would be met with an attack on Beijing. Xi, like Putin, is said to have been stunned…

This unsubstantiated rumor is being reported in many conservative websites as fact. This is deceptive in the extreme. Goodwin says up front that the stories may be false, and he is a columnist, not a reporter. Yet other publications say that “‘The New York Post’ reported that…” using as evidence Trump’s statement to Fox News’ Laura Ingraham that Putin didn’t invade Ukraine during his administration for “a very good reason, and I’ll explain that to you someday.”

I think the story could easily be true, but it’s still a rumor, and should not be reported as fact or as a credible report.

3. Do note, however, that the New York Times and the routinely anti-Trump media accepted and ran with equally unsubstantiated reports of President Trump’s statements to others when they could be spun to reflect badly on him. The primary aspect of this rumor that makes the Times ignore it isn’t its questionable accuracy, but that it will be seen by many as favorable to him.

4. This tells us nothing about Occupy Democrats that wasn’t already long obvious, but still… 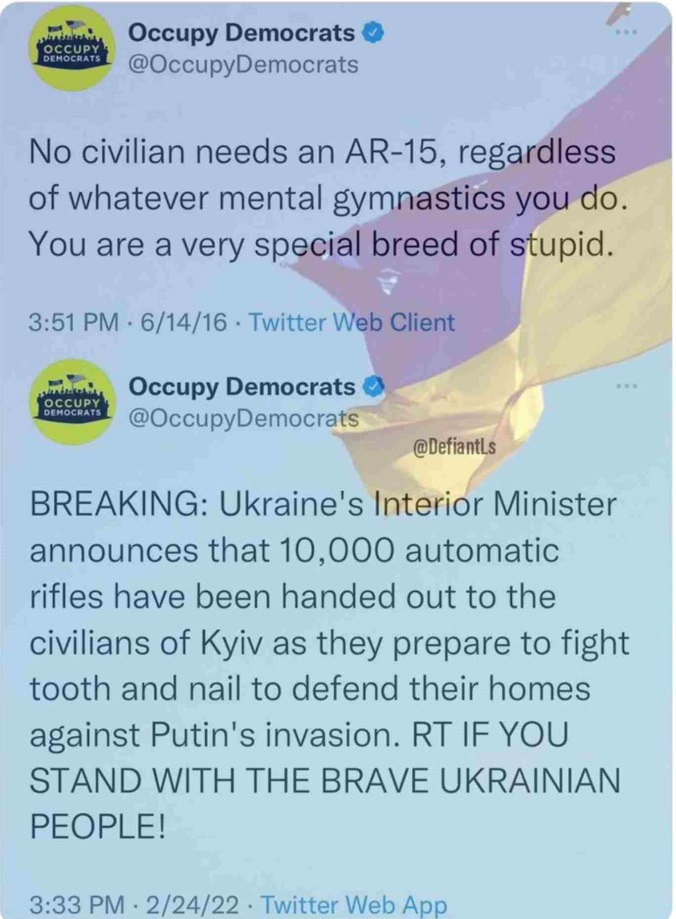 5. That same Harvard-Harris poll I cited here claims that 62% of voters say Putin wouldn’t have invaded Ukraine if Trump were President. That’s encouraging, because it’s almost certainly true. At least a solid majority of the nation, if not of Democrats, still understands that when the United States has a weak and feckless President, foreign nations are likely to believe they can get away with international lawlessness.

6. WHAT???? Applebee’s and CNN were bombarded with criticism after the network ran an up-beat ad promoting the restaurant’s menu during live coverage the invasion. While the commercial promoting five boneless wings for $1 with the purchase of a hamburger and the Zac Brown Band’s hit song Chicken Fried played, a live scene from Kyiv was being shown in the bottom left of the screen.

In two words, “So what?” The complainers were looking for reasons to be offended. It is unfair to criticize CNN for an obviously unintentional juxtaposition like that, and completely absurd to attack Applebee’s which certainly didn’t buy the ad slot and say, “Now be sure you run this during a combat report.” Nonetheless, the company further empowered our censorship and “trigger-warning” mobs by apologizing, with this grovel:

“We are deeply concerned about the situation in Ukraine. When we were made aware that our ad was placed in this manner, we immediately reached out to CNN to pause our advertising on their network. It never should have aired, and we are disappointed in the actions of the network.”

With all the offensive journalism CNN engages in every day, it was this that inflamed its viewers. They don’t have dead ethics alarms, they have scrambled ethics alarms.