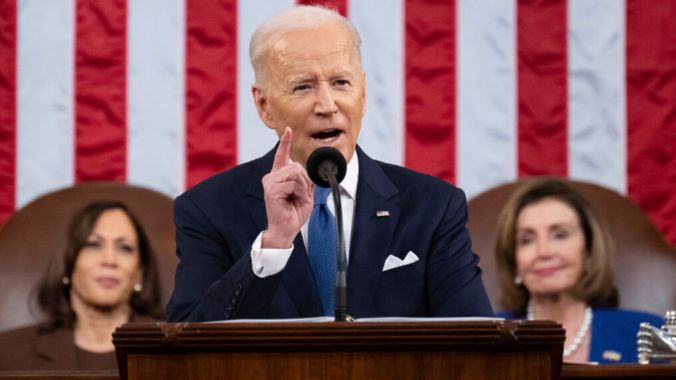 —President Joe Biden in his State of the Union speech before Congress last night, talking nonsense.

I mentioned yesterday that I would have gained respect for Joe Biden if he had the integrity to say last night, as Gerald Ford did in 1975, “The State of the Union is not good.” I did not expect him to do so, because Biden has no integrity, as the rest of his speech proved.

Unlike most SOTU messages, Biden waited until the very end to give the report to Congress that is supposedly the justification for the whole useless, increasingly embarrassing ritual. Doing so, he might as well have said, “Everything I’ve said before this is calculated dishonesty, just like this false assessment of our nation’s state. But what else am I supposed to do?” One astute wag wrote that the unspoken message of Biden’s speech was perfectly embodied in this immortal “Animal House” clip:

Who, including Biden, could possibly believe that the State of the Union is anything other than in deep, deep trouble, or that—this is even more ridiculous—that it is “stronger today than we were a year ago”? By what measure could that be true?

Public trust in the government is at its lowest level ever. The public now knows that its President is the declining, feckless, weak and babbling puppet anyone paying attention in 2020 feared he would be. It knows that Kamala Harris provides no hope for improvement. Inflation is skyrocketing, and promises to get worse. Our children are still required to wear masks in school, hampering their speech, hygiene, social development and education. The supply chain is disastrously disrupted. Fuel prices have soared. In a useless and irresponsible sop to climate change hysteria, the nation has given up its energy independence, once cited as the most important aspect of U.S. security, and is now in the bizarre stance of being dependent on Russia for oil while it is imposing financial sanctions on Russia.

The National Debt is far larger than it was a year ago, when it was already dangerously high. The Department of Justice has shown that it will abuse its power and the Constitution to persecute dissenters, and the party currently in power has made it clear that race, gender and quotas are considered more important than experience, competence and expertise. U.S. health experts have forfeited all trust, but the government still chants the mantra “follow the science.” The arts continue to be crippled; baseball is in the middle of a work stoppage!

Race relations are as bad as they have been in the last half-century; anti-American propaganda and demagoguery is spreading through education, journalism, the professions and institutions. Right and Left have not been so polarized since the Civil War. The nation no longer has any trustworthy sources for the public to extract sufficient knowledge to engage in competent self-government.

Violent crime is exploding in the cities, and police are being killed if they don’t quit first. Democratic district attorneys are refusing to enforce the laws, and their party, openly engaged in constricting individual rights, is gaslighting the public by claiming that the opposing party poses a “threat to democracy.”

Let’s see, what else? Oh, right! The Biden fiddled while Russia sat on Ukraine’s border preparing to invade, and is now petrified to take meaningful action in defense of an ally because Putin is threatening nuclear war and might just be crazy enough to start one.

So how can the State of the Union be called “strong”? Because “we” are strong! How inspiring! Let’s put that on a coffee mug.

It is not worth the time, effort or thought to dissect a speech that was, as many pointed out, the equivalent of a campaign stump speech, avoiding the negative, spinning facts (no jobs were “created” when the businesses that were foolishly forced to constrict or close because of the pandemic were finally allowed to begin operating somewhat normally again) and resorting to vagaries. After the speech, one Administration representative after another went in front of cameras and when asked how far Biden was prepared to go to help Ukraine, replied, “As the President said, “everything is on the table.” They might as well say, “Ramalama-ding-dong.” “Everything is on the table” means “We have no fucking idea what to do.”

Most inexcusable of all, perhaps, was Biden’s cowardly refusal to deal with what is a strong candidate for his biggest botch (though there are so many), the chaotic and miserably planned withdrawal from Afghanistan. When GOP Rep. Lauren Boebert shouted out “Thirteen of them!” referring to the Kabul airport terrorist attack victims among U.S. servicemen, it was both rude and, to some extent, required. Democrats opened themselves, and the SOTU, to this forever by countenancing Nancy Pelosi’s speech-ripping stunt after Trump’s last State of the Union message. They are ethically estopped from complaining.

A State of the Union report is mandated in Article II, Section 3, Clause 1 of the U.S. Constitution,which directs the President to periodically “give to the Congress Information of the State of the Union, and recommend to their Consideration such measures as he shall judge necessary and expedient.” It does not have to be a speech, nor does it have to be public.  Among his other bad ideas, Woodrow Wilson turned the formerly written report into an address to Congress in 1913. Biden’s spin-denial-and-lie-fest last night shows that it is past time for this tradition to end. Require Presidents to submit an honest and accurate report, and make lying to Congress in the State of the Union an impeachable offense.

The State of the Union in 2022 stinks, Joe Biden is substantially responsible, and a trustworthy President would have said so.