Such episodes are often useful as a way to gauge the ethics alarms, values, common sense and IQs of the public figures and others who comment on them. So it was yesterday. Before a survey, however, there was this provocative note from conservative site “Not the Bee”:

Will Smith’s aggressive defense of his wife on the Oscars stage occurs alongside his complete and utter spousal neglect of her off the stage. Smith has already admitted that he and his wife are in an “open marriage.” In other words, he allows other men to have sex with his wife. There are few more potent and enduring symbols of emasculated weakness—and of bad husbandship—than a man standing by while other guys hook up with his wife and make a mockery of their wedding vows. We should note that Will Smith presumably hooks up with women in his own right, but of course that simply degrades his own personal integrity even further—if you can’t defend your wife and your marriage from the impulses and the ego of your own sexual appetites, you’re not much of a man or a husband, whatever else you may be.

Getting back to the Round-Up…I believe we were up to #4?

4. The Smith’s son, actor Jaden Smith, tweeted, “That’s how we do it.” Ah! Attack people who make jokes we don’t think are funny! It looks like Will is teaching his offspring not to be the man he wants to be.

5. Of course there was a Trump connection, imagined by Trump-Deranged CNN analyst Assah Rangappa (last seen making a fool of herself here). Her tweet: 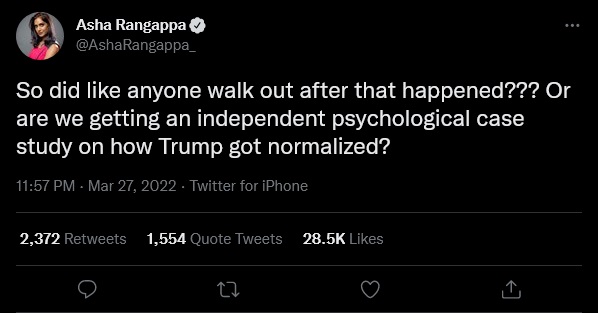 Yes, such is the quality of thought one gets from CNN analysts. In what universe would the natural reaction of an audience to Smith’s solo meltdown be to walk out of the ceremony. Did she think it was staged? How does she lay the conduct of black, progressive, Hollywood star on Donald Trump? Well, obviously, if something is bad, it’s his fault.

6. However, the standing ovation the Oscar audience gave Smith after he attacked Rock is signature significance. Their short-term memory can’t be that bad, can it? They cheered a man who had just broken the law, harmed a colleague, and scarred the Academy, on nationwide TV. I would like to see a video that showed if anyone wasn’t applauding: they would be the minority in Hollywood who know right and wrong from a box of taffy.

The proper reaction would have been the way the other jurors in “12 Angry Men” react when the bigoted Juror 10 goes into a racist rant.

They turn their back on him. 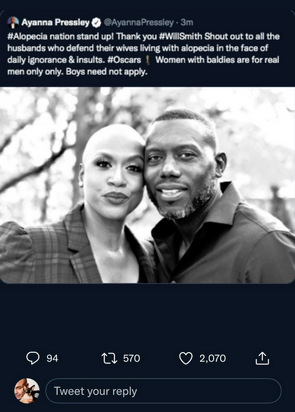 Yes, there is a member of Congress thanking someone for engaging in criminal assault and battery in public. A responsible party would censor her for that. She took the tweet down in minutes, but she wrote it, thought it, and meant it.

Good point, Bernice! And I’m sure you made that same point as the nation rushed to use a single Minneapolis cop to tar all cops, whites, and the United States as racist. I’m checking…

9. Nikole Hannah-Jones, the Pulitzer Prize-winning fake journalist behind the 1619 Project, tweeted that she found it incredible Smith was able to be a part of the show after his assault as if nothing had happened. See? She can be perceptive sometimes.

10. Maria Shriver tweeted, “We should never get to a place where we sit and watch a movie star hit someone on global television then, moments later, get a standing ovation while talking about love.”

Except that we are at that place, or at least Hollywood is.

11. Nasal rapper Nicki Minaj tweeted, “You just got to witness in real time what happens in a man’s soul when he looks over to the woman he loves & sees her holding back tears from a ‘little joke’ made at her expense.”

Make that a “14-year-old’s soul” and you might have a point. Idiot.

12. Kathy Griffin, she of the severed Trump head, said, “It’s very bad practice to walk up on stage and physically assault a Comedian and suggested an audience member at a comedy club may decide to “be the next Will Smith.”

Wow, a good point from Kathy Griffin! But The Daily Beast critiqued her observation, saying it ignored the personal history between Rock and Smith. That’s The Daily Beast, all right, and why I seldom visit without taking a stiff drink first. The “personal history” wouldn’t have justified Smith’s assault regardless of how strained it was (and it wasn’t so fraught anyway.)

13. Janai Nelson, the president of the NAACP Legal Defense and Education Fund, observed in a tweet that “the way casual violence was normalized tonight by a collective national audience will have consequences that we can’t even fathom in the moment.”

Who says the “national  audience” did anything of the kind? The Oscars producers, by not ejecting Smith, and those who cheered him after the slap, are the ones who “normalized casual violence.

14. Frederick Joseph, bestselling author of “The Black Friend” and an antiracist activist,  tweeted,

“Many takes on here about Will Smith and Chris Rock, especially from people whose partners are not Black women (mainly white people). I don’t care if it’s a joke or not, the amount Black women have to endure — people are tired of it. We have no idea what Jada has gone through.”

If anyone wants an explanation of why the American black culture is as prone to violence as it is, that quote is a good starting place. A major “antiracist” figure believes that violence is justified by frustration and what individuals have “gone through” in the past. Joseph might as well have been rationalizing Chicago drive-by shootings.

This wasn’t quite the worst public reaction, though.

“When I saw a Black man stand up for his wife, that meant so much to me. Keep my wife’s name out your mouth, leave my wife alone,’ that’s what your husband is supposed to do, right? Protect you.”

She then called the episode “the most beautiful thing [she’s] ever seen because it made [her] believe that there are still men out there that love and care about their women, their wives.”

Psst!. Tiffany, you dolt, the issue is not what Smith yelled at Rock from his seat. Try to keep up.

15 thoughts on “The Great Smith-Rock Rumble Ethics Round-Up!, Part 2: “We Are All Rock Now””