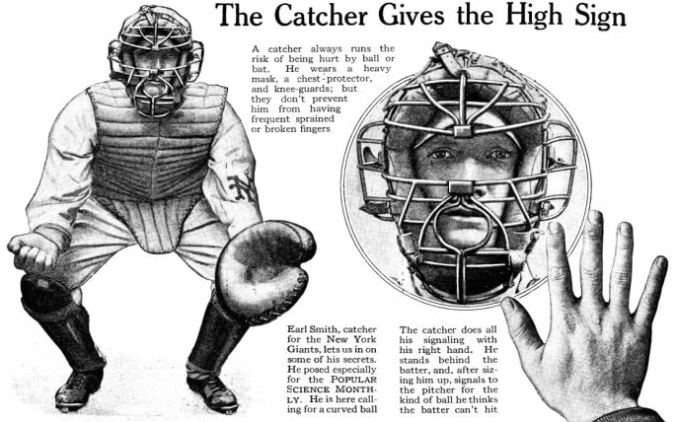 That’s part of a feature from a 1920’s magazine about how catchers and pitchers communicate regarding pitch selection in baseball. (I had Earl Smith on one of my favorite Strat-O-Matic teams, the 1922 Giants!) Trying to steal signs so a batter would know what pitch was coming—a huge advantage—was long part of the game and considered legal and fair, as long as the efforts came on the field. Once a team started using  spies in the stands and secret relay systems not involving players, the practice became unethical.

In 2017, as exhaustively discussed here in these posts, the Houston Astros used a technology-assisted system of sign stealing to win their division, the American League play-offs, and the World Series. It was one of the three most significant scandals in the history of the sport, trailing only the Black Sox World Series fixing plot in 1919 and the steroid scandal on the Nineties. Baseball, as a sport that values continuity and nostalgia, hates to change, but as with its acceptance of replay challenges to over-turn bad calls by umpires, the sport cannot pretend that technology hasn’t rendered some aspects of the game obsolete. There are too many ways to use technology to steal signs now.

Major League Baseball, following the Ethics Alarms motto that when ethics fails, the law steps in (and usually makes a mess of things), tightened its rules and penalties for illegal sign-stealing, but wisely recognized that rules wouldn’t be enough. Baseball managers, coaches and player are not known for well-functioning ethics alarms, and the financial benefits of cheating can be substantial: several Astros players had spectacular years at the plate in 2017 far beyond what they achieved before or since. All of them are many millions richer for it.

And thus it is that Major League Baseball announced yesterday that teams this season will begin using electronic devices that transmit signals from catchers to pitchers.

It involves a push-button transmitter worn on the catcher’s glove-side wrist. The device relays the catcher’s preferred pitch to bone-conduction earpieces inside the caps of the pitcher and any three other players the team designates. The pitcher still will have to shake his head yes or no, but there will not be any way for the opposition to know what pitch he’s agreeing to or refusing.

About half of the 30 teams  will open the season with the system; the rest are expected to join once they feel comfortable with it. Of course it will be encrypted, because some team will try to hack the system. As with all technological developments, this one will put some employees out of business. For a century, sign-stealing specialists managed to stay on rosters and coaching staffs because their skill was considered so valuable. That niche is not long for this world.

I hate to see this development, but baseball had no choice if it wanted to keep the trust of its fans that games weren’t being won by stealth rather than skill.

I wonder how long it will take our governments to be similarly concerned about the cheating opportunities lurking in our elections, but that’s another story.

One thought on ““When Ethics Fails, The Law Steps In”…Or In This Case, Technology”