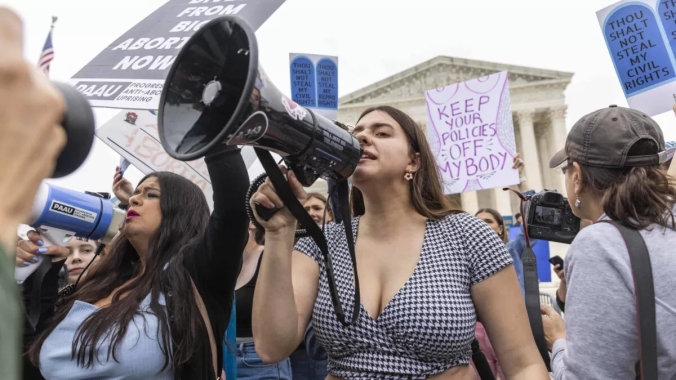 Another one of the ironic boons from the despicable Supreme Court leak of Justice Alito’s draft majority opinion portending that Roe v. Wade is about to be overruled is how vividly it has exposed the intellectually dishonest and unethical nature of “pro choice” arguments. This comes as no surprise to anyone who has been following the abortion debate diligently, but in their fury and panic, abortion advocates are revealing just how weak their case is. They are also revealing that those who are willing to sacrifice nascent human lives for other objectives tend to have no compunction about using rationalizations, ad hominem attacks, classic logical fallacies and fearmongering as well as outright lies, when they finally have to defend their positions.

The reappearance of the costumes from “The Handmaiden’s Tale” is a neat symbol of the whole phenomenon. (How many of such protesters haven’t read Roe, the Alito draft, or Margaret Atwood’s novel? My guess: most of them.) To be fair, prominent Democrats like this guy endorsed the hysteria:

That delusion was apiece with the suggestion that women could force men to support abortion on demand by going on a sex strike. Similarly ducking the issues are the illegal demonstrations at the homes of Justices before it is even known who voted to end Roe, and President Biden’s moronic declaration in response to the leak that “this MAGA crowd is really the most extreme political organization that’s existed in American history—-in recent American history.”

Since Roe v. Wade has been almost unanimously regarded in legal and academic circles as a badly reasoned opinion (even Ruth Bader Ginsburg conceded it was a botch), the epitome of flagrant judicial activism and legislation by judges, those trying to defend the decision now have had to resort to distractions, diversions, straw men and fictional slippery slopes. “Next those fascists will ban inter-racial marriage and Brown v. Board of Education!” more than a few Democratic officials and pundits have proclaimed, apparently forgetting that just a few weeks ago they were demanding that Justice Thomas, the dean of the Court’s conservatives, recuse himself because of the activities of his very white wife.

Others have blamed the Catholic Church and argued that the maybe-ruling is a violation of the Constitution’s separation of church and state because four of the five assumed majority members, plus Chief Justice Roberts, are Catholics. The reversal would “deepen America’s divide” warned the New York Times. Heh. “Can’t have that!” sayeth the publication that didn’t concern itself with such division when it was covering a false case that President Trump had conspired with Russia to steal the 2016 election, or when their favorite political party was illicitly impeaching Trump twice.

I have seen opinion pieces that defend Roe on the basis that abortion slows climate change. Many defenders have argued in print and on the MSNBC/CNN echo chambers that the motive behind a reversal is racism (though a disproportionate number of the human lives ended by abortion are black). Another tack is that retiring the contrived Constitutional right is hypocritical, since Republicans don’t support more federal assistance for children who are allowed to be born. The Times ran one op-ed that argued that fewer abortions would be bad for the economy.

Levi Strauss was among several companies that chose market-pleasing virtue-signaling over honest debate when it defended Roe as a “critical factor to the workplace gains and contributions women have made over the past 50 years,” and argued that “restricting or criminalizing access” to rubbing out unborn children in the womb “will jeopardize that progress.” Legalizing the murder of men would also presumably add to workplace gains for women: this is the same unethical “the ends justify the means” rationalization that pro-abortion activists and feminists have been using for decades to avoid trying to balance the competing interests that have makes the issue so difficult. (It’s easy, though, if you pretend one of the interests doesn’t exist or matter.)

Today Maureen Dowd resolutely refuses to acknowledge one of those interests, attributing the potential reversal of Roe to–get this—“priggishness.” Yes, it’s all about discouraging sex: Dowd’s hook is that the Court will be rejecting the sexual mores of Marilyn Monroe—I’m not kidding!— and thus is “yanking away the right of women to control their own bodies, strapping us into a time machine hurtling backward.”

“Spoken like the brave former fetus she is” was how Fox’s Laura Ingraham characterized similar remarks from another furious abortion activist last week.

Some of the other detours from legitimate debate include:

There are many more. Send the ones you encounter into the comments.

I’ll end Part I by noting that Justice Alito, in his draft, states directly that the decision to reverse Roe implies no opposition to either the pro-abortion or the anti-abortion position. Of course, one has to actually read the opinion to know that.

28 thoughts on “The Dishonesty And Desperation Of “Pro-Choice” Advocates In The Wake Of The Dobbs Leak, Part I: Anything But The Issues”