1. Funny, but stupid. This meme is fascinating. 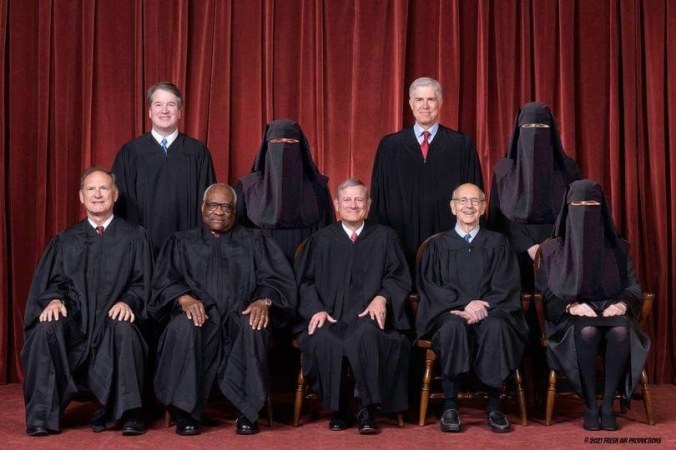 It could easily be intended to mock the kind of hysterical distortions from the Left’s Supreme Court leak freakout—on that basis, I laughed when I saw it. However, it almost certainly IS one of those hysterical distortions, which reduce debate to an infantile level. I’m sure many progressives think it’s profound. [Pointer: Arthur in Maine]

2. The Great Stupid, Harvard Division: The Beth Israel Deaconess Medical Center in Boston, a teaching hospital affiliated with Harvard University, was about to host a panel on autism titled “Autism Awareness: Thinking Outside the Box.” However after Harvard students created a Change.org petition created by Harvard students accusing the panelists of promoting “violently ableist” views, the panel was postponed. The petition complained,

Autism is a neurodevelopmental and neurobiological disability that is not treatable or curable. It is not an illness or disease and most importantly, it is not inherently negative. Autistic people at Harvard and globally have advocated in the face of ableism to defend ourselves from such hateful, eugenicist logic. By supporting such an event, Harvard is signaling that its campus is unsafe for Autistic people, and that is unacceptable. We call on organizers and attendees of this event to learn from Autistic self-advocates during this time.

The appropriate response to this contrived political correctness nonsense was to ignore it, although, “Oh, grow up!” would not be out of line. But predictably, an alliance of the weenies and the woke capitulated, thus teaching Harvard students poor reasoning works on cowards and fools. Sighs Reason:

Incidents of activist-oriented students at elite college campuses successfully preempting discussions that do not conform to an intersectional progressive mindset are by now so common that it’s impossible to report on all of them. But more such incidents are occurring every day—and feckless administrators, perpetually afraid of giving offense, are letting them have their way.

3. My contempt for Mitch McConnell, as ever, know no bounds. The ethical imperative of the November mid-election is to punish Democrats for mile-long list of excesses and assaults on the Rule of Law, the Separation of Powers, equality and democracy. So, naturally, the Republican Senate Leader goes out of his way to activate single-issue progressive voters who would gladly see the U.S. to become a dictatorship as long as mothers had leave to kill their unwanted fetuses. McConnell said that if Roe was indeed over-ruled, a national ban on abortion was “possible,” thus validating the pro-abortion fans’ nightmare scenario.

4. Worst Nazi ever! Apparently everything is still Donald Trump’s fault so the Left can avoid responsibility. One of my personal least favorite New York Times op-ed propagandists, Michelle Goldberg, noted that 2021—you know, when Democrats ran both Houses of Congress and Joe Biden was President?—had more anti-Semitic incidents than any year since 1980. While Democrats have several virulent anti-Semite members of Congress, such as all the members of “The Squad,” and progressive college campuses have increasingly promoted the cause of Palestinians while demonizing Israel, and former hard-left New York Mayor Bill de Blasio openly accused the Jewish community in New York City of endangering the public health during the pandemic, Goldberg lays the spike in anti-Semitism at the feet of…Donald Trump. She writes,

Antisemitism started increasing in 2015, when Donald Trump came on the political scene and electrified the far right, then spiked during his administration.

That’s odd, since Trump was by any measure the most pro-Israel POTUS in recent history, in stark contrast to Barack Obama. But Goldberg can get away with accusing Trump of encouraging anti-Semitism, because Democrats still embrace (and repeat) the Big Lie that he was the equivalent of Hitler.

5. Great athletes, lousy human beings. So many revered superstar athletes have dead ethics alarms. The latest example is Boris Becker, the German pro tennis giant who won six Grand Slam titles, three Wimbledon titles, and earned  $47 million fortune in prize money and sponsorship deals. How do you screw up with that much money? Well, in addition to not having ethical principles, a lot of great athletes are just not very bright. He had an affair with a model while his wife was pregnant, and his mistress won a paternity suit for his daughter with her, costing Becker millions.  He lost $14 million and his mansion in his divorce, then had a series of failed business ventures. Becker declared bankruptcy, but he couldn’t even do that honestly. Last month he was found guilty by a London court of hiding millions of dollars’ worth of assets and loans to avoid paying his debts. He’ll be in prison for the next 2 and a half years.