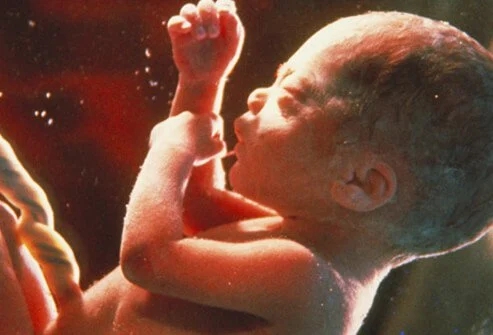 I just didn’t think the Democratic Party’s ethics rot had progressed this far. I’m still stunned. Yesterday the Senate Democrats attempted to pass a pro-abortion bill that would have legalized a vague medical standard permiting late-term abortions right up until birth, prohibited states from restricting abortions until after 23 weeks gestation, and eliminated parental notification laws for minors, among other restrictions. Every Democratic Senator voted for the provision except West Virginia’s pariah of the Left, Joe Manchin. Every Republican Senator voted against the unethical monstrosity, so the bill was blocked from coming to the Senate floor for debate, 51-49.

However, the ethics story is how the Democratic Party has allowed the pro-abortion fanatics in its ranks and among its “base” to thoroughly corrupt it to the point at it would openly endorse allowing unborn human beings to be killed at a point in their progress toward full citizenship when they are physiologically indistinguishable from newborns. (That’s a third-trimester fetus above). Not only that, the Party appears to think the majority of Americans are similarly inert ethically (or too apathetic and ignorant to deserve a democracy), and will support a position that is hostile to the concept of human rights and the foundational national principle of the right to life.

Democrats can’t possibly be correct that the nation’s values have sunk so far, can they? But what do I know? Back in 2006, writing on The Ethics Scoreboard about a strange and ugly late-term abortion case in Virginia, where an unwilling mother shot herself in the stomach on the day her child was supposed to be delivered in order to kill her baby. (It worked.) I concluded the analysis by writing that I hoped…

Left will restrain itself from diverting accountability from Skinner long enough to agree with the basic proposition that shooting an unborn child on its birthday is wrong.

That can’t be too difficult.

Apparently after 50 years of moral and ethical rot caused by Roe v. Wade making the killing of the unborn seem benign, reasonable, and a “right,” it is too difficult. In fact, the Democrats put the bill forward to create a “trap” by forcing Republicans to vote against it. Then they could say, “Look at these fanatics! They really think that birthing people shouldn’t be able to snuff out a nascent human being for any reason whatsoever, and treat it like a wart, a tumor or a parasite!” (Except for the bills name, “women” doesn’t appear anywhere in the language of the bill. The Democrats are counting on nobody reading it.)

Sure enough, President Biden or his ventriloquists quickly responded to the entirely predictable defeat of the bill by demagoguing that the vote “runs counter to the will of the majority of American people” and that congressional Republicans, who cast the Democratic bill as a radical overreach, “have chosen to stand in the way of Americans’ rights to make the most personal decisions about their own bodies, families and lives.” Combine this with Sen. Schumer’s fatuous squeal,

And there we have it. The leaders of the Democratic Party now officially and openly take the position that there is no competing interest in the abortion debate. Biden made that statement after referring to the target of an abortion as “a child” last week. Fetuses don’t matter until the woman carrying them says so, and no human life is involved other than the mother’s mental, emotional or career well-being. Schumer’s focus on rape and incest makes that clear: a gestating child’s life has no value if the manner in which it came into being involved a crime. All human life, however, has the same value regardless of its origins—at least to people who have an ethical value toward life. Slavers and slave-owners, in contrast, regarded the life of human being conceived by blacks as less than human. It’s a similar point of view.

Biden’s statement, as usual of late, is a lie. The bill allows abortion at will well into the second trimester, and polls indicate that most Americans think abortion should only be legal within the first trimester. In the case of late-term abortion, a 2019 survey conducted by You.gov found that 66%  of U.S. adults who identify as pro-choice opposed third-trimester abortions, with 68% oppose abortions the day before a baby is born.

Yes, only 68%. 50 years of forced abortion sanctification has done that much damage to pro-abortion Americans.

The applicable provision of the defeated bill prevents

(9) A prohibition on abortion after fetal viability when, in the good-faith medical judgment of the treating health care provider, continuation of the pregnancy would pose a risk to the pregnant patient’s life or health.

The words are so vague they would allow a physician to interpret “life” as broadly as necessary (in good faith, of course, always good faith!) to justify killing a completely viable fetus, and “health” to include the mother’s emotional or mental health. Neither “Life” nor “Health” are defined by the bill. That’s not, as they say, a bug but a feature.

Then the mainstream media set out to perform its function last night, lying outright about the bill and the vote. MSNBC claimed a “GOP filibuster” had “derail(ed)” a bill “to codify Roe v. Wade protections.” That’s bad even for MSNBC. There was no filibuster–the bill was shot down by majority vote. The bill also went far beyond Roe v. Wade. Was the MSNBC tweet announcing this fabricated version of the event pulled by Twitter “factcheckers”?  Does a bear relieve itself in the AMEX executive washroom?

The Associated Press’s Zeke Miller endorsed both of these lies, saying it was a GOP-led filibuster that defeated the thing, and describing the Democratic bill as being designed to turn Roe v. Wade into law. Facts Don’t Matter to these people.

Neither, we now know, do human lives.