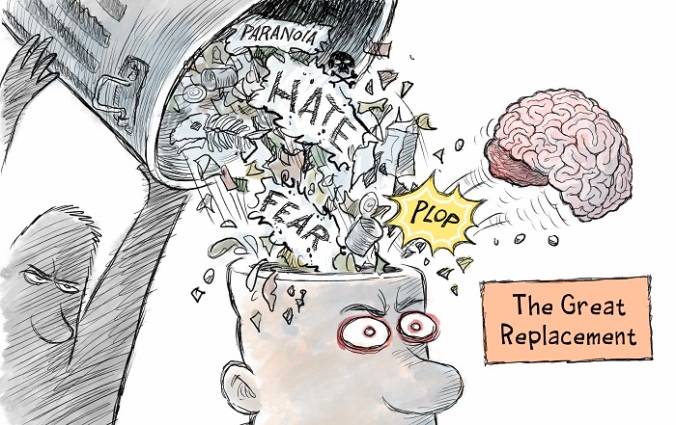 The Buffalo shooter’s “manifesto” [the link is here] has given the mainstream media and others one more possible avenue of attack against Republicans, or so they apparently believe. Follow along, now: the idea is that “the Great Replacement” conspiracy theory is at the core of U.S. white supremacy; the Republican party has been dog-whistling it as it carries on in its usual racist way; Tucker Carlson of Fox News has been a prominent whistler; Payton Gendron’s long crazy-town screed shows his fealty to the concept, and thus Republicans, Fox News and Carlson have blood on their hands. Why worry about inflation and Biden administration incompetence when there’s that to focus on?

I try to line-up Comments of the Day in rough order of reception, but Humble Talent’s discourse on “The Great Replacement” was so timely that I jumped it ahead of the line. (It also reminds me that I have to finish a post about the explosion of the myth that Hispanic-Americans were always going to be part of the reliable Democratic Party coalition. That was always false—Humble Talent explains one of the reasons—and it is now obviously false.)

Here is his Comment of the Day on the post, “Thoroughly Disgusted Ethics Sign-Off, 5/15/2022: Our Despicable, Untrustworthy Media”:

“The Great Replacement” was, in fact, despite how hard they’re trying to peddle away from it, a contention from the Left. The idea was, in the wake of Obama’s first win, that the Left could cobble together an alliance out of the diaspora of the dispossessed and create a winning coalition forever, particularly as the parts of the diaspora were growing faster than the population at large.

It isn’t controversial to say that they held these views, at least then, which was only 10 years ago. James Carville wrote: “40 More Years: How the Democrats Will Rule the Next Generation” in 2011 saying explicitly things like “Demographics are Destiny”. Carville wasn’t a historical supporter of Obama, saying things like “If Hillary gave up one of her balls and gave it to Obama, he’d have two.” in 2010, but he had been around the party as an insider for decades. There is an approximate zero percent chance that he wrote the book without having floated these ideas internally to a general approval.

The problem (or maybe the internal solution to the problem) is that the idea was bunk. The alliance was always tenuous at best, and there are all kinds of great reasons for that. For example; It takes a certain amount of privilege to care about someone else’s problems, and when you treat all political issues like a zero-sum game, people will see things through that lens and wonder why those resources aren’t going to them. The groups also didn’t play nice together, as an example, in poll after poll, we find that racial minorities have a particularly hostile view towards LGBTQ people and causes than the population at large, regardless of political affiliation. Square that circle. But most importantly, and germane to the great replacement theory is that the diaspora aren’t monolithic voting blocks: Over time, particularly between the first and second generation, immigrants, illegal or otherwise, become more Americanized and their voting habits drift to the Right.

“Demographics are Destiny” was predicated on the idea that they owned the allegiance and votes of racial minorities in perpetuity. This was not, and was never actually true.

My point, in a very roundabout way, is that “replacement theory” isn’t a “right-wing conspiracy”, it’s right-wing people taking Democrats at their word. And really… Democrats still believe this. They won’t say it out loud, because saying that their plan is to fundamentally change American culture by importing as much foreign culture as possible isn’t even that popular on the Left, but actions do speak louder than words, and their behavior in regards to the management of the the American/Mexican border speaks volumes.

And really… Regardless of whether “replacement theory” or “Demographics are Destiny” are bunk, in the short term, you are importing hundreds of thousands of unskilled laborers into a market flush with unskilled laborers. This doesn’t matter to the Democratic elite, because it’s not their jobs that are going to feel the competitive squeeze… No, they’re going to have to hire more staff to provide services. And the damage that does to the economy and social fabric are material.