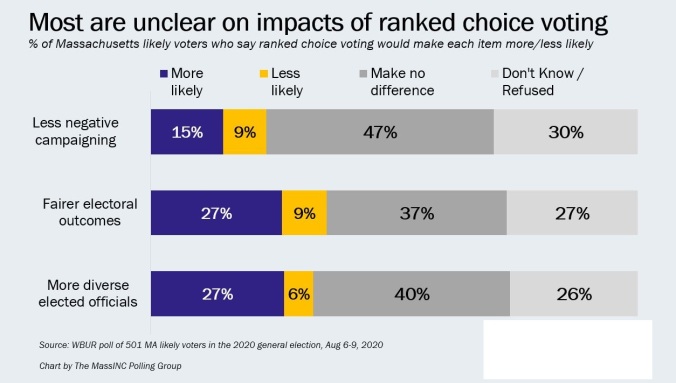 Esteemed commenter Extradimensional Cephalopod spent an admirable amount of time and effort last week exploring and debating the desirability (or not) of ranked choice voting systems. As a special gift to Ethics Alarms readers, E.C. summed up all of the issues in a single epic comment, and I have added his addendum to that comment as well.

Alright, I’ve collected the arguments people have brought against ranked choice voting and condensed my counterpoints. What do you think?

Counterpoints: Not if we educate them competently, like we already sometimes do with regular ballots. If they’re not capable of comprehending ranked preferences and a ballot that accepts them, then their vote would be meaningless noise even under a first-past-the-post system. If that describes most voters, we’ve got a bigger problem. However, standardized testing indicates that many children can understand and fill out bubble-sheets correctly, so adults should be alright.

2. RCV encourages voters to game the system and vote dishonestly.

Counterpoints: As far as I can tell, that’s mathematically untrue. I don’t have a comprehensive proof, but I did some algebra with four and five candidates and a few assumptions about party affiliation and it indicates that trying to swing a few votes to influence who is eliminated first doesn’t make a difference in which frontrunner gets a majority. On the contrary, under RCV the voter is incentivized to rank their preferences honestly. It’s actually first-past-the-post voting that encourages dishonest voting, also known as “holding one’s nose and voting for So-and-so” instead of a candidate you actually approve of, just to make sure the other major party doesn’t win.

3. RCV encourages bland candidates that try to appeal to everyone.

Counterpoints: On the one hand, having candidates that appeal to everyone would be a really nice problem to have for a change. On the other hand, we also don’t want candidates who do so by being maximally ambiguous and minimally decisive. Luckily, RCV actually encourages candidates who take risks with ideas for overhauling the status quo to replace zero-sum tradeoffs with win-win opportunities.
Republican and Democratic politicians do not lead or accomplish much because they cannot afford to lose their designated voter base. They are limited in what ideas they can discuss safely. They’re more likely to demonize their opponents than push innovative ideas.

4. “One person, one vote.” If your first choice is eliminated, you shouldn’t get to reassign your vote.

Counterpoints: If every person gets the same number of votes, isn’t that the important thing? Isn’t that the real point of the phrase? Also, we already have runoff elections where people get a chance to cast another vote in the same race for the same office. Those don’t seem to be objectionable. RCV works exactly the same way except it streamlines the process by collecting the initial votes and the runoff votes at the same time. That’s why this version of RCV is sometimes called “instant runoff.” If the United States had started out with RCV, I can virtually guarantee that nobody would be demanding a switch to first-past-the-post.

ADDENDUM: Further research indicates that in eliminating the spoiler effect from first-past-the-post voting, ranked choice voting introduces a lack of monotonicity, meaning that in a close race, adding more votes ranking a candidate as the first choice can actually result in that candidate’s loss. This effect might only appear when there are at least three candidates who each have roughly equal support, which is why I didn’t pick it up when I did the algebra for four and five candidates with two frontrunners.

That said, in my opinion, RCV’s elimination of the spoiler effect more than makes up for this flaw in a political context. My reasoning is as follows:

The cause of the lack of monotonicity is circular preferences, where roughly a third of voters prefer A to B, another third prefer B to C, and the remaining third prefer C to A. There isn’t an obvious winner among the group, and depending on which voting system is used and the exact vote totals, the election could arbitrarily settle in favor of any of the three options. They’re all valid equilibrium states.

I’m not sure how common this situation is with political candidates, but one would reasonably hope that if three candidates receive approximately the same number of votes and there is no clear group preference of any candidate over any other, we might hope that they’re all decent candidates and it doesn’t matter so much who wins.

Furthermore, even if we used a first-past-the-post voting system, those circular voter preferences would still be there. The voters just wouldn’t get a third option to begin with, because the parties and the voters would be afraid of the spoiler effect. Someone other than the voters would end up choosing who doesn’t get to run, instead of the voters finding out how all three candidates stack up against one another. Or the spoiler would run, and the election would be spoiled.

FPTP voting cannot fix the problem of resolving circular preferences objectively, because it’s also just a version of ranked choice voting: one where only the first choices are counted. The only thing FPTP does is prevent the issue from coming up, at the cost of incentivizing politicians to demonize their opponents and avoid innovation, prioritizing the appearance of effectiveness over actual effectiveness.

Admittedly, it might be possible to use dishonest, tactical voting with RCV in order to determine who is eliminated first and thereby who gets the majority. However, it would be much more difficult to do that with RCV than with FPTP. If we really want to prevent tactical voting, though, we might randomly select the exact RCV algorithm from a curated list after all the ballots are in.

For the sake of honesty, I do think that all ballot rankings should be recorded, instead of only recording the vote reallocations when one candidate is eliminated. That way people can judge whether the system seems to be working in practice as well as in theory.

And, as always, most of the work of democracy needs to be done before citizens or legislators cast any votes. RCV just helps incentivize that work.

I don’t suppose anybody finds my reasoning sufficiently compelling? Does anyone have any points against RCV I didn’t list here?