Actress Charlyne Yi ( you may remember her on “House”—well, maybe not)  tweeted last week :

“I think about the first time I met David Cross 10 years ago & he made fun of my pants (that were tattered because I was poor). Dumbfounded I stared at him speechless and he said to me ‘what’s a matter? You don’t speak English?? Ching-chong-ching-chong.’

“I will say this: I can tell the difference between this man making a joke vs condescending me,” Yi wrote later. “This happened 10 years ago and I sure as hell hope he’s changed (or at the very least, he’s scared enough to not be his racist self).”

Now Cross, a very funny improvisational comic and actor best known for “Arrested Development” (he was also in the first two “Men in Black” films) is being attacked on social media as a a racist. He purports to be flummoxed.

“I don’t remember this at all!” he said in a tweet this week. Cross later tweeted to Yi,

“Charlene, i dont remember this at all! It’s bonkers to me and WAY, way out of character. DM me so I can understand all of this.”

Mark this down as one more way social media allows people to be worse human beings, and makes the world a meaner, nastier place.

Yi, who has obviously held a grudge for a long, long time (Career just didn’t work out the way you hoped, eh?) exploited social media to get some media buzz by accusing a colleague of being a jerk ten years ago. This, in turn, calls down on Cross’s head the Web Furies, harms his reputation, and there isn’t a thing he can do to defend himself, whether he said what she claims, or not.

This is a blinding Golden Rule breach by Yi. Who among us would like to have this happen—a bad moment in a single personal interaction suddenly made public just to cause us humiliation and embarrassment? It seems as if Yi, lacking a salacious story of being propositioned, assaulted or raped by Harvey Weinstein, decided to see if recounting the time David Cross was a jerk to her could get some cheap publicity. And it worked! END_OF_DOCUMENT_TOKEN_TO_BE_REPLACED 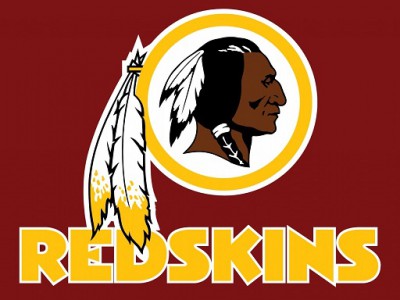 Here’s the theory behind this episode: if you disagree with the virtuous, unassailable position of the proudly politically correct, you don’t deserve to be treated with honesty, fairness, or respect. This is essentially the same attitude displayed by partisan hit-blogs, conservative talk radio, and Debby Wasserman Schultz. In the case at hand, Comedy Central’s “The Daily Show” decided that anyone who hadn’t caved to the victim-mongering over the Washington Redskins name should be embarrassed and mistreated on TV, and that their smug, young , knee-jerk progressive audience would enjoy the spectacle.

And yes, this is among the reasons why I, despite appreciating Stewart and Colbert’s skills from a technical viewpoint, don’t watch Comedy Central any more. (The other reason is this.) 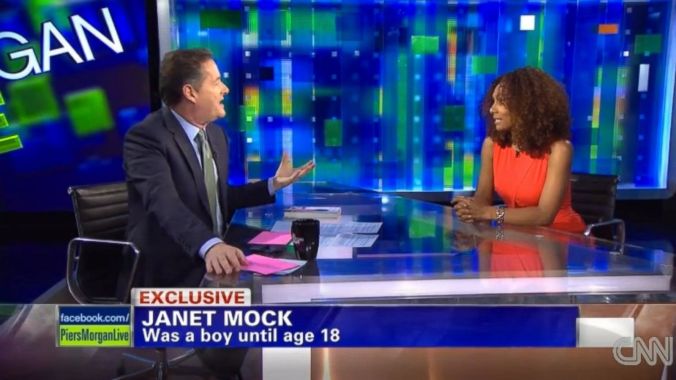 Piers Morgan, CNN’s imported British tabloid reporter turned Larry King replacement, invited trans author and activist Janet Mock on his show to promote her new memoir, “Redefining Realness: My Path to Womanhood, Identity, Love & So Much More.” As I watched the interview (because of Mock and not Morgan, who makes my skin crawl), I was struck by how far such interviews have come since David Susskind would invite transgendered individuals on his PBS show—this was classy, remember—and essentially hold them out as freaks. Morgan was respectful and supportive, though the sensationalist aspect was still there but muted: the text under Mock during her interview read “BORN A BOY,” and “was a boy until age 18,” which are, though accurately describing how most CNN viewers would understand Mock’s journey, over-simplified and counter to how Mock describes herself.

Mock seemed happy, Morgan seemed gracious. Then Mock went on Twitter and Buzzfeed to pronounce Morgan a clueless, ignorant, biased jerk.  He was, shockingly, “trying to do infotainment” Mock said. Morgan’s show is the epitome of infotainment, and everybody knows it. She criticized him for “sensationalizing” transgender people while neglecting a substantive discussion about her book. The sales of Mock’s memoir depend on its sensational aspects, again, as she and her publisher well know. Mock accused Morgan of asking the same kinds of embarrassing questions about body parts and boy friends that non-trans people are inevitably curious about. Well, of course he did…because that’s what his audience is curious about.

None of this was communicated to Morgan either before, during, or after the interview. Morgan, who is no Sam Rubin, was incensed, and struck back via Twitter, since that is the forum where Mock chose to publicly attack him. In various tweets and exchanges he called Mock cowardly, “churlish,” and shameful, and criticized her allies as well, as she successfully brought down the progressive hoards on Morgan’s head. The same week, he invited her back to on the show along with a panel so he could defend himself while assailing her conduct. You can read the transcript of that show here.

Sarah Burge, a.k.a “Human Barbie,” who actually contains more plastic than Plastic Barbie, who, come to think of it,  is quite possibly a better human being than “Human Barbie.” It’s complicated.

One of the wonderful things about the Internet is that somewhere out there is always someone who has seen through the fog of lies, spin, misrepresentations and conventional wisdom, and is writing about it. The first trick, of course, is finding such individuals, who may be part of the spin and confusion the very next day. The next one is getting the truth to as many people as possible.

When I heard that Anderson Cooper had kicked the plastic-surgery mutant named Sarah Burge off his show on the air, I was ready to give him an Ethics Hero award. Not only has Burge, who is known as “Human Barbie”, * indulged her pathological obsession with plastic surgery to spend almost a half-million dollars making herself look like the iconic Mattel doll, she is trying to make sure her daughters are similarly afflicted. She told Cooper she wants to botox her 15-year-old daughter, and she is setting up a trust for her 7-year-old so she can start mutilating herself when she turns 18.

Suddenly Cooper stopped the interview, saying, “I gotta be honest, I gotta just stop. I’m sorry. I try to be really polite to all my guests, but I just think you’re dreadful. I honestly don’t want to talk to you anymore.” END_OF_DOCUMENT_TOKEN_TO_BE_REPLACED