Did you know that animal-loving British families killed an estimated 400,000 household pets—cats and dogs—in the first week after Great Britain declared war on Germany in September, 1939? Neither did I, and now a new book by Hilda Kean, “The Great Dog and Cat Massacre,” sets out to remind us of that ugly episode.

As the New York Times review of the book notes and Kean explains, the mass euthanasia was “publicly lamented at the time,” but has since been erased from memory.  But why has it been erased from memory, and how? This is a disturbing cultural phenomenon that Ethics Alarms has covered before, notably in the post about dance marathons in the U.S. during the Depression. One of the definitions of culture is what we choose to remember and what we choose to forget. Forgetting, however, while often psychically soothing and an easy way to avoid guilt and accountability, is a pre-unethical condition. That which has been forgotten can no longer teach us, and a society that collectively decides to pretend something cruel, horrible or traumatic didn’t happen risks allowing it to happen again.

This, of course, is one more reason why the recent progressive mania for historical airbrushing is dangerous, irresponsible and unethical. Keep that statue of “Joe Pa” on the Penn State campus. Leave  King Andy on the twenty dollar bill.  Don’t take down that bust of Bill Cosby in the TV Hall of Fame. All civilizations have fallen heroes, moments of panic, times when they forget their values and betray their aspirations. Of course it is painful and embarrassing to remember these things, but also essential if human ethics are going to progress instead of stagnating, or even going backwards. We associate the elimination of cultural memories with totalitarian regimes, and for good reason, for they are blatant and shameless about it.

No nation is immune from the process’s appeal, however. When I was going to grade school and studying the Presidents of the United States, Jackson and Woodrow Wilson were routinely hailed by (mostly Democratic) historians as among the greatest of the great. The first Jackson biography I read barely mentioned the Trail of Tears. I read four well-regarded biographies of Wilson that ignored his support for Jim Crow, and the degree to which he deliberated reversed advances in civil rights, being an unapologetic white supremacist. The influenza epidemic that killed millions was excised from my school’s history books. Thomas Jefferson’s concubine, Sally Hemmings? Who? END_OF_DOCUMENT_TOKEN_TO_BE_REPLACED 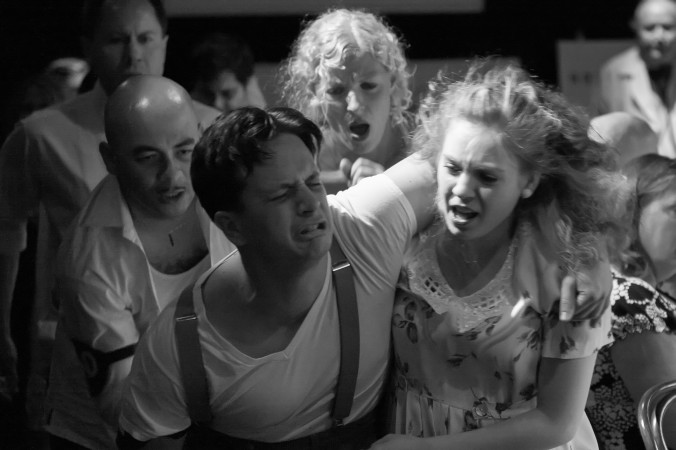 “Man lives by a lingering ember,

“And while there are beautiful things to remember,

The ugly things, one should forget.”

—-“Things to Remember” from the musical “The Roar of the Greasepaint, The Smell of the Crowd”  by Anthony Newley and Leslie Bricusse

Jews sometimes are criticized for evoking the Holocaust at every opportunity. Their explanation is that we “must never forget,” an argument I once thought was bizarre. “Who could forget the Holocaust?,” I wondered. Something so unique and horrible would be impossible to forget; it would be like pretending the Grand Canyon didn’t exist.

That was ignorant of me. Nations, religions, cultures and groups of all kinds are stunningly effective at forgetting historical episodes which challenge their self-image and most cherished illusions. Jews are rightfully and wisely vigilant at reminding the world of what was done to them as the rest of humanity passively looked on in the 30’s and 40’s, because their extermination at the hands of the Nazis is a prime candidate for history’s memory hole, where good and sensitive people, along with their nations, communities and cultures, dispose of memories too ugly to remember. Once the memories are gone, they no longer haunt us, it is true. They no longer teach or warn us, either. The ethical course of action is to remember our worst moments, and evoke them as often as possible. We can only be our best by admitting our worst. END_OF_DOCUMENT_TOKEN_TO_BE_REPLACED 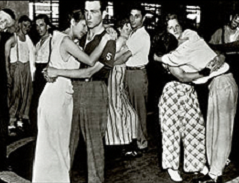 It doesn’t come up here often, but I am the artistic director for a professional regional theater company. It is dedicated to producing 20th Century stage works of artistic and historical value that other, more commercial (sensible?) companies wouldn’t touch with a ten-foot pole. Every now and again I find a play that is especially risky, challenging, and rich in theatrical possibilities, and those are the ones I direct myself.

This summer, I will be directing such a production, a harrowing recreation of Depression era dance marathons called “Marathon 33.” It was written by the fascinating June Havoc, Gypsy Rose Lee’s sister who became a Hollywood star and who is perhaps best known as the irritating “Baby June,” the  blonde and perpetually juvenile vaudeville headliner in the musical “Gypsy.” Havoc survived the Depression by competing in dance marathons during the Thirties, and wrote two autobiographies about these terrible spectacles, in which desperate couples would stay on their feet for thousands of hours for food and the promise of a cash prize, as more fortunate Americans paid to see who would drop first.

The show, at least as I and my artistic collaborators envision it, involves recreating dance marathons as accurately as possible, down to the smallest detail. The audience for the show will be immersed in the action as if it were the heartless mob that cheered the real dancers on, and we will avoid anachronisms of any kind. And yet, as I prepare to cast the show after a wonderfully productive round of auditions, I face an ethical conflict. Several of the strongest candidates for dance contestants are African-American, and there were no black competitors in the real contests. Even if there had been, mixed-race couples would not have been tolerated, especially in Virginia, where we are setting the show. Yet if I cast the best actors available without reference to race, I will have both. END_OF_DOCUMENT_TOKEN_TO_BE_REPLACED

“After careful consideration, I have decided to end my marriage. I hope everyone understands this was not an easy decision. I had hoped this marriage was forever, but sometimes things don’t work out as planned.”

—-Kim Kardashian, reality star and cornerstone of the ongoing famous-for-being-famous Kardashian family media scam, announcing her sudden divorce filing –apparently explained to the celebrity gossip site TMZ before being revealed to her soon-to-be ex—-from husband Kris Humphries, to whom she had been married for 72 days.

In the dark days of the Great Depression, unscrupulous promoters held dance marathons across the country, the first “reality shows” since Nero fed Christians to lions for sport in the Roman Colosseum. Desperate people stayed on their feet dancing with only brief rest periods for thousands of hours, with participants getting meals for their suffering and the last couple standing getting a cash prize. Sadistic Americans paid admission fees to watch the carnage. One of the most popular gimmicks in the marathons was the fake wedding, in which the MC would proclaim that two of the courageous contestants had fallen in love, and would be married right on the dance floor. END_OF_DOCUMENT_TOKEN_TO_BE_REPLACED