Since a prime starting point for ethical analysis of an event or someone’s conduct is  answering the question, “What’s going on here?”, Joe Biden’s statement that if you believe Tara Reade, the ex-Biden staffer (who Joe says he doesn’t recall) now accusing him of sexual harassment, assault and indeed rape, you shouldn’t vote for him genuinely puzzled me, and I asked for assistance in figuring out what Joe was doing.

In a neat, concise, Comment of the Day, Rich in CT answered my question. I had never heard of the phenomenon he identified, being constitutionally resistant to economic theory from childhood. Above is a video that further elaborates on the topic, the Pareto Optimality or Pareto Efficiency, “a situation that cannot be modified so as to make any one individual or preference criterion better off without making at least one individual or preference criterion worse off.”

Got it. Now I know what that is. Thanks, Rich.

Here is Rich in Ct’s Comment of the Day on the post, “OK, I Give Up: What IS This?”: END_OF_DOCUMENT_TOKEN_TO_BE_REPLACED

I haven’t posted a Comment of the Day this month, and it’s me, not you. I have a high quality backlog, in fact: my apologies. I’ll be working diligently to catch up.

First in the queue is Arthur in Maine‘s deft reflections on the post about the police officers who flipped a coin to decide whether or not to arrest a reckless driver.  (I tend to think that it is a very well-argued “Everybody does it” rationalization, but never mind…).

Here is his Comment of the Day on the post, Ick Or Ethics? The Officers’ “Coin Flip”:

When I was going to school in Boston, I made my beer money by working in emergency medical services. Part of that work was in a district of the city, and part of it was in the northern suburbs; the latter company was a private concern that had the EMS contract for three contiguous towns and did a boatload of transfer work on top of it. A terrible company, long since sold out, but that’s another story. Suffice to say that I liked the work itself, even if the company itself was lousy.

In that role, I came to know a lot of cops and firefighters really well. They weren’t that different from us, other than the fact that their jobs were a lot more dangerous than ours – and ours were dangerous.

First-response work requires that the teams work in very close proximity with one another, and teams are mostly together for their entire shifts. Depending on the branch, shifts can last between eight hours and 48 (yes, you sleep if there’s nothing going on). Inherent in a smoothly functioning unit in all three first-response disciplines is a good relationship between crew members; partners or teams at odds with each other become a huge problem. If they can, supervisory personnel will usually do their best to ensure that the personnel in a given car or truck get along well. It’s remarkably intimate. END_OF_DOCUMENT_TOKEN_TO_BE_REPLACED 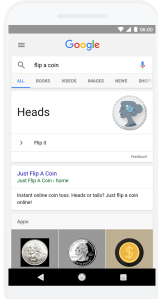 OK, it wasn’t really a coin flip, as many news sources inaccurately reported. And, true, there is no definitive evidence that the virtual coin flip two police officers allegedly resorted to in order to make the call whether to arrest a reckless driver or not actually was the reason they arrested her. It is even possible that they did the opposite of what the cell phone app told them to do.

Never mind. It’s still an interesting ethics story. I would make it an ethics quiz, except that I am sure of the answer.

Here is the background: In the city of Roswell,  outside of Atlanta on April 7,  Sarah Webb was running late for work. Police saw her go by at what they estimated was over 80 miles an hour, caught up to her, and told her she was diving recklessly, especially since the roads were wet.

She was arrested. Then it came out that this happened, (from the New York Times account):

In the footage of the arrest, the officers can be heard talking about what to do. One said that she had not been able to measure the exact speed of Ms. Webb’s vehicle but had to drive as fast as 90 miles per hour to catch up with her. Then she could be seen pulling out a phone.

Then a sound effect can be heard: a cartoonish chime and click, like a coin flipping and landing.

“This is tail, right?” said one officer.

“Yeah. So, release?” said another.

“23,” came the reply, referring to a police code for an arrest. Ms. Webb was handcuffed moments later.

In the aftermath, the charges were dropped and the officers involved have been suspended, with the police chief saying, “This behavior is not indicative of the hard-working officers of the Roswell Police Department. I have much higher expectations of our police officers and I am appalled that any law enforcement officer would trivialize the decision-making process of something as important as the arrest of a person.” Meanwhile, the reckless driver, in an exhibition that should at least be entered for the 2018 Gall of the Year award, is vocally claiming victimhood, saying, END_OF_DOCUMENT_TOKEN_TO_BE_REPLACED

I am trying to find another example of a U.S. President taking action that harms the nation and its citizens while admitting that it will have no measurable beneficial effects whatsoever.

I can’t find any. I’d like to know about one, and see how it worked out.

When the Washington Post’s editorial staff essentially calls a Democratic President’s conduct an embarrassment. it really must have been embarrassing…and it was. Obama’s sole explanation for his decision, which he has, as is his style, dithered over for years, was this:

“Ultimately if we’re going to prevent large parts of the Earth from becoming inhospitable or uninhabitable in our lifetimes, we’re going to have to keep some fossil fuels in the ground rather than burn them.”

But killing the pipeline will keep no fossil fuels in the ground. So the reason really is this:

“America is now a global leader when it comes to taking serious actions to fight climate change and, frankly, approving this project would have undercut that global leadership.”

Ah. So America will show it is serious about climate change by killing a project that all agree will have no tangible, long-term, short-term, measurable effects on climate change at all. This is Obama logic, as we have seen many times: good intentions is enough; results don’t matter. If his decision won’t help reduce the risk of parts of the Earth  becoming “inhospitable or uninhabitable in our lifetimes”—a risk that is also measurable and speculative at best—then the purpose of it isn’t to prove leadership. True, it proves atrocious leadership, but Obama is cynical, not stupid. The decision is political. Its only tangible benefit is to the Democratic Party, which feels the need to make the welfare of the U.S. and its citizens subordinate to the fanaticism of the environmentalist movement. END_OF_DOCUMENT_TOKEN_TO_BE_REPLACED

The end of the baseball season is traumatic for me, except for those few years that ended in Boston Red Sox championships, and those two golden glow seasons (1967 and 1975), when the team lost at the end but fought such a good fight that it felt like they had won. In my house we refer to the days between the end of the World Series and the beginning of Spring Training as The Dark Time.

On the plus side, I have about three more hours every day to do something productive.

For the second consecutive year, baseball ended with an ethics conundrum in its final game. Last night, as the Kansas City Royals battled back from a late deficit again (they had done so in the previous game as well) to take the Series four games to one,against the New York Mets at Citi Field, the topics were trust, courage, leadership, and most of all, consequentialism. The latter is to baseball as apple pie—or baseball— is to America.

Let me set the stage. The Royals, having stolen the previous game from the Mets’ grasp by an unlikely 8th inning rally (the Mets lost one game all season when they were leading in the 8th; they lost two such games in this five game series). With their backs against the wall (on the short end of a 3-1 game tally, the Mets had to win last night to avoid elimination), the New York sent their ace, the remarkable Matt Harvey, to the mound to do what aces do: win. Harvey had it all last night. After eight innings, the Royals hadn’t scored.  Harvey looked fresh in the eighth, and got the Royals out without surrendering a baserunner.

All season long, with a close game after eight innings, Mets manager Terry Collins would tell his starter to take a seat and let his closer finish the game. This is standard practice now: complete games by starting pitchers are a rarity. Once, not too long ago, the league leader in that category would be in double figures. Now the top is usually about five. Moreover, nobody cares. The best teams have 9th inning specialists who almost never lose one-run leads, much less two, and the Mets had a great one, Jeurys Familia.

After Harvey’s dominant eighth, the Fox cameras recorded the drama unfolding in the Mets dugout. Collins’ pitching coach told Harvey that his night was done and Familia, as usual, would close out the game. Harvey pushed past the coach to confront his manager, passionately. Let me finish it, he insisted. The game is mine. END_OF_DOCUMENT_TOKEN_TO_BE_REPLACED

Making better decisions is essential to making ethical decisions, and a lot of what we discuss here relates to overcoming impediments to unethical thinking and decision-making. This 2012 video is germane to Ethics Alarms; it also includes some of the ideas in Dr. Z’s Rules, which I presented here.

This animated video describes Dr. Robert Cialdini ‘s “six universal principles of persuasion” that people and organizations tend to use to influence the thinking, values and opinions of those of us who are not willing or able to reason in an orderly and unbiased fashion. (Dr. Zimbardo las a somewhat different six). It reflects the research in Dr. Cialdini’s book, “Influence” The Science of Persuasion.”

As those who come here often know, I like to use a variety of approaches and tools. Cialdini’s framework is just one of them, but one worth understanding.

The video is a bit over 11 minutes.