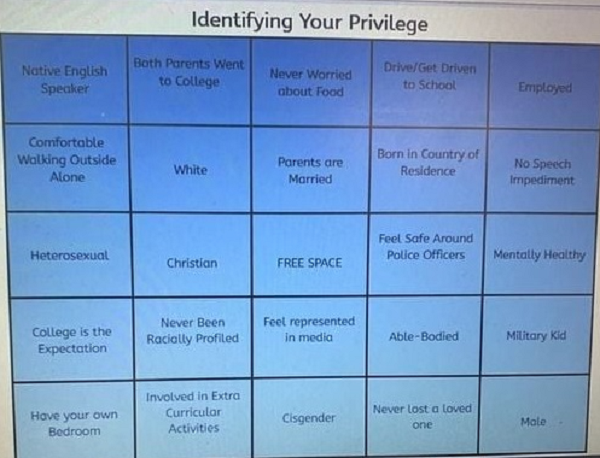 Teachers at Oakton High School in he Fairfax County school district, Virginia’s largest, had students participating in a political indoctrination exercise dubbed “Privilege Bingo.” The idea was to convince students of the innate unfairness of an American society which bestows unearned advantages on white, middle class males, among others. The students were told to self-identify their “privilege” as, school administrators huminahumina-ed when caught CRT-handed, “an opportunity to reflect on their own experiences while building their critical thinking skills.”

END_OF_DOCUMENT_TOKEN_TO_BE_REPLACED

August 6, 1945 is one of the most important ethics days of all, and among the most controversial. The United States bomber Enola Gay—now on exhibit in a hangar near Dulles Airport, dropped the first atomic bomb on the Japanese city of Hiroshima. Approximately 80,000 people were killed in seconds, and another 35,000 were injured. More than 60,000 would be dead by the end of the year from the effects of the fallout. Was the launching of the nuclear age by the United States ethically justified to save American lives (an invasion of the Japanese mainland had been estimated to risk a million U.S. casualties) and end the war? Was President Harry Truman guilty of a war crime, as non-combatants, including children, constituted most of the deaths? Did the horrible results of the new weapon prevent World War III, or make it more likely? These are still intensely debated questions by scholars, historians, theologians, military strategists, philosophers and peace activists.

1. Well, I’ve been spoiling for a fight, shopping around Northern Virginia and fining myself one of the few unmasked. So far, nobody’s said a word, but anyone who does is in for it. I’ve been vaccinated twice and probably had a mild, symptom-free infection before that. I have always been unusually resistant to viruses. Mask fog up my glasses and make me miserable. If you have chosen not to get your shots, swell, that’s your choice, but your exercise of personal liberty is not going to restrict mine without a fight. And don’t tell me I have to wear a mask so phobics feel “safe.” That’s not my problem either. I am not inclined to “social distance,” either. The mask fetish is going to strangle community, society and the joy of life unless we draw some hard lines. I’m drawing.

END_OF_DOCUMENT_TOKEN_TO_BE_REPLACED 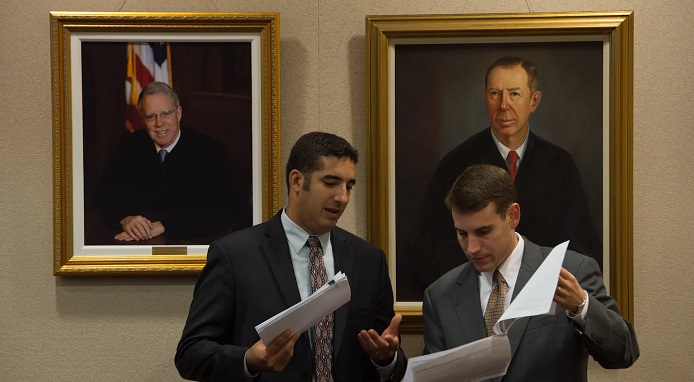 Among the bulwarks of the George Floyd Freakout and its accompanying “anti-racism” hustle is that all whites are racists, non-whites cannot succeed, prosper or find justice in the United States, and that anti-black racism should be presumed in any situation where that presumption might advance the cause of a black citizen.

“The Court is concerned the portraits may serve as unintended but implicit symbols that suggest the courtroom may be a place historically administered by whites for whites, and that thus others are of a lesser standing in the dispensing of justice,” Bernhard wrote. “The Defendant’s constitutional right to a fair jury trial stands paramount over the countervailing interest of paying homage to the tradition of adorning courtrooms with portraits that honor past jurists.” The judge’s opinion observes that the U.S. is experiencing “heightened attention to the past inequities visited upon persons of color,” so the fact that 45 of the 47 past judges whose portraits hang in the Fairfax County courthouse were white is now an implicit threat to black defendants.

His grovel came in response to a request to remove the portraits in a motion from the layer for Terrance Shipp Jr., who is scheduled to stand trial on charges of eluding police, assault on a law enforcement officer and other counts.

END_OF_DOCUMENT_TOKEN_TO_BE_REPLACED

In my one, fortuitous one-on-one conversation with futurist Herman Kahn, then regarded as the most brilliant man in America, he observed that society periodically for forgets everything it has learned over the years, and then chaos reigns temporarily until bad ideas and horrific mistakes re-teach the lessons that once were accepted as obvious. He was talking about the Sixties, but it is clear that this is another one of those periods. Kahn also noted that some of the forgotten lessons are re-learned too late to save society from permanent harm. The Sixties gave us socially acceptable promiscuous sex and the resulting normalization of children born out of wedlock, the re-assignment of of abortion as ethical (somehow) rather than criminal, and societal sanctions of recreational drug use.

How profound. Nobody has ever disputed that women are people, and Booker’s non-logic—the statement compels the response, “And SO…????”—is an appeal to emotion without substance. It also makes its own rebuttal screamingly obvious to anyone but a pro-abortion zealot: “Abortion should be repugnant to men and women…and Presidential candidates…because unborn babies are living human beings.” END_OF_DOCUMENT_TOKEN_TO_BE_REPLACED

[Special thanks to my friend (and the inventor of The Three Circles) lawyer/legal ethicist John May for alerting Ethics Alarms to this one.]

Sandra Mendez Ortega, a 19-year-old maid, stole three rings worth at least $5,000 from a house she was cleaning in Fairfax City, Virginia. Lisa Copeland, the client of the cleaning service, discovered her engagement and wedding rings were missing from the container where they were usually kept. The two rings were appraised at $5,000 in 1996, and a third less valuable ring was taken along with them. Fairfax City police  interviewed the three women who had cleaned the home, and they all denied seeing the rings, much less stealing them. Ortega, however, subsequently had second thoughts, and confessed to the theft. She told her boss that she had the rings and turned them over to him. He contacted the police,   Mendez Ortega confessed to them as well, saying she returned the rings after learning they were valuable. (Thus she only took them because she thought they weren’t valuable. Okaayyyy…) The police told her to write an apology letter to Copeland, in Spanish, in which she said in part, “Sorry for grabbing the rings. I don’t know what happened. I want you to forgive me.”

(I’m sorry, but I have to break in periodically so my head won’t explode. ” I don’t know what happened?” She knows what happened! She stole the rings because she thought she could get away with it.)

Copeland says she has never seen that letter, and that Mendez Ortega has never apologized to her in person. The maid was charged with felony grand larceny. At the trial, the jury found her guilty. (If she had confessed and was remorseful, why did she plead not guilty?)

But we are told that they felt sympathy for the defendant, who was pregnant with her second child, during the sentencing phase. “The general sentiment was she was a victim, too,” the jury foreman, Jeffery Memmott, told the Washington Post. “Two of the [female jurors] were crying because of how bad they felt.”  Although the  jurors convicted the maid of the felony, they agreed among themselves that it was just a “dumb, youthful mistake.” So they decided that her punishment would be only be her fee for cleaning the house the day of the theft, $60. Then they took up a collection and raised the money to pay the fine, plus and extra $20.

(Yes, she made money on the transaction. Crime pays.) END_OF_DOCUMENT_TOKEN_TO_BE_REPLACED 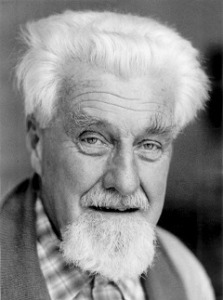 Konrad Lorenz, 1903-1989 ,  was an acclaimed Austrian zoologist regarded as the founder of modern ethology, which is the study of animal behavior. His research  explained how behavioral patterns may be traced to through evolution,  and he made major contributions to the study of aggression and its roots. Lorenz shared a Nobel Prize for Physiology or Medicine in 1973 with the animal behaviorists Karl von Frisch and Nikolaas Tinbergen.

It seems that documentation surfaced proving that Lorenz joined the Nazi Party in 1938, however, and for that, Austria’s Salzburg University last week posthumously stripped him of his honorary doctorate.

Is this the right thing to do?

END_OF_DOCUMENT_TOKEN_TO_BE_REPLACED

There was a fascinating editorial in the Washington Post this morning, I thought. See if you agree. It read in part…

At point-blank range, a Fairfax County police officer a year ago fired one shot, killing an unarmed man standing inside his home. The man, John Geer, was distraught and had been drinking — his longtime girlfriend had moved out and called police when he threw her things into the front yard — but he held no hostages, brandished no weapons and, so far as we have learned, posed no serious threat either to police or to public order…Shot in the chest, he was left to bleed to death inside his doorway while police officers, remaining outside the house, did nothing for an hour. Five and a half hours after the shooting, his body remained sprawled on the floor where he died.Incredibly, the authorities in Northern Virginia — including Fairfax County police and state and federal prosecutors — have refused to furnish any explanation for this stupefying sequence of events last Aug. 29 in Springfield. They have stonewalled…The officer who fired the shot, who remains on the force with full pay, has not been identified.

The authorities conduct themselves as if the case presented insurmountable complexities. This strains credulity. It involved one shot, one gun, one shooter and one fatality. It took place in broad daylight, at mid-afternoon. It was witnessed at close range by at least two other police officers, as well as friends and neighbors of Mr. Geer. And still authorities refuse to act or discuss Mr. Geer’s death…Will no one take responsibility and make some decisions in the unexplained death of Mr. Geer?

Don’t you think it would have been helpful, not to mention responsible and ethical, for the Post to remind its readers of this case while it fully participated in the media-driven race-baiting and hysteria over the shooting of “unarmed black teen Michael Brown” in Ferguson, Missouri?

It is also interesting, given the fact that the Brown-Wilson case is still very much in the news and on the tips of accusatory pundits’ tongues, that the Post neglected to mention the irony embodied by the quite legitimate lament of its editorial now. Ferguson? What’s that got to do with Fairfax? END_OF_DOCUMENT_TOKEN_TO_BE_REPLACED

How many elected leaders will be responsible when it means risking THIS?

Washington Post Metro columnist Robert McCartney relates the cautionary tale  of Fairfax (Va.) School Board member Liz Bradsher.  The school board, like others across the nation, was required to make some tough choices with its resources scarce and stretched to the breaking point.  The costs of renovating a high-achieving elementary school in the Fairfax County countryside  didn’t pass an objective, cost-benefit analysis, so the board voted to close it. Bradsher, whose district includes Clifton, the neighborhood served by the school, was expected to vigorously oppose the move.  But after studying the costs and enrollment forecasts, she reluctantly concluded that it made more sense to shutter the facility so the county could spend scarce renovation dollars where they would benefit more children.

She did what was best for the Fairfax community as a whole, which, as an elected official, is her duty. But rather than appreciating the courage it took to agree to close a beloved institution in her district for the greater good, she is being attacked. Anonymous postings on a popular local website have spread false rumors that she has a drinking problem and that her marriage is on the rocks. She is receiving threatening letters, and obscene e-mails.   END_OF_DOCUMENT_TOKEN_TO_BE_REPLACED