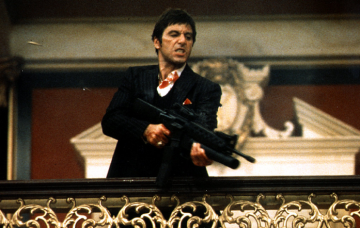 “Say hello to my little friend! And while we’re on the topic of guns, don’t you think it’s time to be sensible about gun control?”

In a move stunningly unconscious to outrageous hypocrisy, the group “Mayors Against Illegal Guns” have posted a video on on its website and Youtube (of course), featuring an impressive array of solemn Hollywood celebrities chiding Americans for not doing something about guns “yesterday” and to “demand a plan” to end gun violence. The problem? Many of these same celebrities owe their presence on the video to Hollywood’s obsession with gun violence, without which they would be just anonymous pretty faces. They owe their mansions and private planes to that gun violence too, which they have happily, willfully and lucratively acted out in scores of violent films and television shows. How can they presume, given how they make their living, to lecture anyone on the topic of guns?

I have some theories. Many of them are dumb as bricks. Most of them are automatic co-signers of the manifesto for any cause branded as liberal, the Hollywood religion,and don’t bother to think about whether it is consistent with their life choices or not. Probably all of them, working every day in one of the most ethics-free, cut-throat, dishonest and hypocritical sub-cultures that has ever existed in the United States are completely numb to the concept of hypocrisy, as apparently are the mayors, who work in the culture of politics, which is only somewhat better. END_OF_DOCUMENT_TOKEN_TO_BE_REPLACED