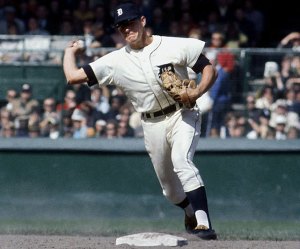 Mickey Stanley in 1968: learning a new position in the World Series, making us dumber…

Frequent readers here know that I often inveigh against consequentialism in its various forms, from labeling sound decisions “mistakes” when they don’t pan out due to uncontrollable factors, to pronouncing unethical conduct as ethical because it chanced to have some beneficent results. This particular hydra seems to be a tough one to kill, and one of the reasons is, I realize, the pervasiveness of sports in our culture.

Reflecting on sporting contests, particularly those involving teams, routinely generates hindsight bias on the part of fans and sports commentators….for one thing, it’s fun to second guess managers and coaches from the safety of an armschair or from behind a computer screen. Unfortunately, the practice endorses consequentialism. Decisions that result in a win are seldom criticized, no matter how moronic or misguided they may have been; tactics that ended in defeat are always called “mistakes,” or worse.

The baseball post-season began yesterday. We won’t see a World Series game until October is almost over, but there was a time, children, long ago, before divisions and the designated hitter, before steroids and ESPN, when in major league baseball, the World Series was the post season. This was the case 45 years ago, in 1968, when the Detroit Tigers, who had clobbered the American League competition on the way to a 103-59 record, including the last 30 game-winning season by any pitcher, turned in by Denny McLain. They were about to face the reigning baseball champions from 1967, the NL’s St. Louis Cardinals, led by future Hall of Famers Lou Brock, Orlando Cepeda, and Bob Gibson. Both were veteran teams and well-balanced; there was every reason to believe that each had a good chance at victory. Certainly, neither was in need of any last-minute overhaul.