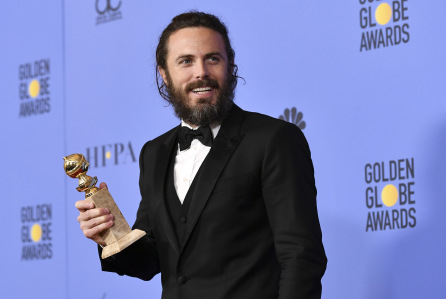 There were several possible Ethics Alarms posts that could have come out of The Golden Globe Awards last night, the obvious one involving the continuing arts community tantrum in the wake of the election of Donald Trump over Hollywood’s sweetheart, Hillary Clinton. Meryl Streep put herself in the running for “Gratuitous Cheap Shot Of The Year ” with her acceptance speech for something or other, but I decided that in a community where Rosie O’Donnell tweets “Fuck you!” to the Speaker of the House for simply completing his duty to certify the Electoral College vote, and over the weekend tweeted, “HE MUST NEVER BE SWORN IN – DELAY INAGURATION – INVESTIGATE – ARREST HIM” as her considered analysis of the proper workings of our democracy, Streep’s shot seemed like the height of restraint.

The more interesting issue on display at the Golden Globes  involves actor Casey Affleck, Batman’s brother, who won the night’s Best Actor in a Film Drama award for his performance in “Manchester by the Sea.” Last year, it was revealed that the actor had two sexual harassment lawsuits filed against him in 2010 that alleged he had groped women on the set and created a generally hostile work environment while directing the film, “I’m Still Here.” Since during the campaign Hollywood was all-in using misogyny and sexual  harassment as one of the many accusations against Donald Trump, some claim that honoring Affleck undermines the community’s assumed condemnation of the Trump-like conduct he was accused of.

Complicating the matter is the conundrum surrounding Nate Parker, the previously unknown black artist who was the main creative force behind the 2016 slave-revolt film “The Birth of a Nation.”  As Oscar buzz was ramping up for his film—remember that the Academy of Motion Picture Sciences is more or less obligated to find plenty of nominations and awards for African Americans, regardless of objective artistic merit—  new details surfaced concerning a decades old criminal case in which Parker was accused of raping a female student while both were at Penn State.  He was acquitted,  but the facts were ugly, and the alleged victim committed suicide. Once that was known, all of the promise shown by “The Birth of a Nation” evaporated. Although the film was a smash at festivals, it received mixed reviews,bombed at the box office, and has been poison at the various awards so far, receiving no nominations.

The New York Times, among other media sources, has published several articles about the apparent double standard, saying most recently,
END_OF_DOCUMENT_TOKEN_TO_BE_REPLACED