My father hated Kate Smith. Hated her. The jumbo alto radio star from the Thirties and Forties was still showing up on TV variety shows in the Sixties and Seventies, and my father always made us change the channel when she appeared. Smith had made a virtual career out of belting her four-square rendition of Irving Berlin’s “God Bless America,” and Dad regarded it as patriotic pandering and exploitation. Thus it seemed appropriate that two teams we all hated in Boston, the New York Yankees and the NHL’s Philadelphia Flyers, periodically used the recording of Smith—and sometimes Smith herself— singing the song during games. Once 9-11 caused baseball to add the song during all games at the Seventh Inning Stretch (time to end that, by the way), Kate’s immortality seemed assured, especially in Yankee Stadium, where her rendition was rotated with a few other versions.

Then some enterprising social justice fanatics and “Hader Gotcha!” masters decided to do a deep dive and find something on Kate Smith. What they found was that among her hits in the Thirties were two songs that make Stephen Foster seem like Snoop Dog. One was “Pickaninny Heaven,” which described a “colored” paradise  with “great big watermelons,” and the momentarily famous “That’s Why Darkies Were Born,” which we will look at in some detail later. These presentist censors—remember, presentism is the fallacy of judging conduct from the past by the updated ethics and values of the present—protested to the Yankees, and that’s all it took to get Kate banished, presumably forever.  (The Flyers have also banned Kate.) The mighty Yankees whimpered in a public statement,

“The Yankees have been made aware of a recording that had been previously unknown to us and decided to immediately and carefully review this new information,. The Yankees take social, racial and cultural insensitivities very seriously. And while no final conclusions have been made, we are erring on the side of sensitivity.”

END_OF_DOCUMENT_TOKEN_TO_BE_REPLACED 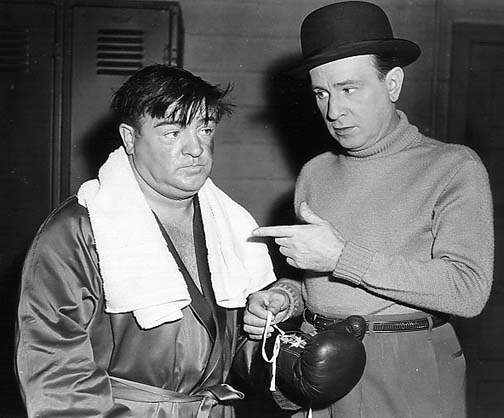 I also checked the biographies of actors whom I knew had athletic backgrounds, and the performing credits of prominent athletes whom I knew worked in TV, stage and films. I also considered some of the candidates, omitted by Juska, that various commenters had suggested. The result is this list of 30 athlete/actors who were ignored by Juska and Rant Sports, every one of whom is beyond question more deserving of a place on an “all-time” list of “Top 25 Athletes Turned Actors” than many of the choices on the Rant Sports list, and quite a few of which—Robson, Williams, Henie, Rigby, Weismuller, Crabbe, Norris, Beradino, and others—should rank near the top. END_OF_DOCUMENT_TOKEN_TO_BE_REPLACED

When actress Hattie McDaniel, the imposing African-American actress who played “Mammy” in the film “Gone With the Wind,” was criticized for her willingness to accept stereotypical and often degrading roles, she countered, “I’d rather play a maid and make $700 a week than be one for $7.”  Not Lena Horne.  Breaking into the movie business as a dynamic and glamorous singer-actress in 1942, she insisted on a long-term contract with MGM that specified that she would never have to play a maid. END_OF_DOCUMENT_TOKEN_TO_BE_REPLACED