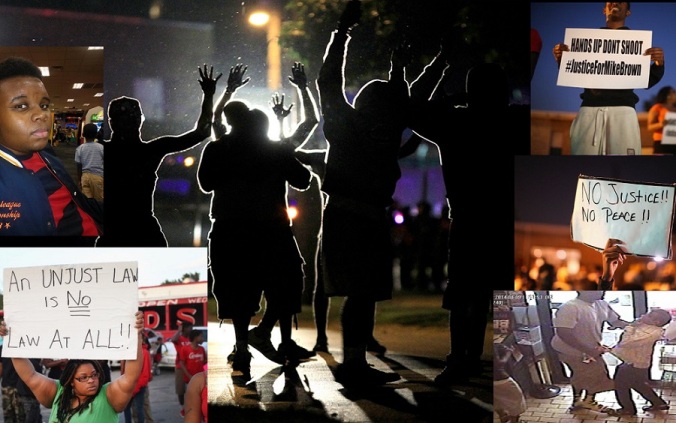 There are too many ethics topics for me to cover adequately as it is. This is frustrating. That the Ferguson Ethics Train Wreck is generating ethics issues on a daily, even hourly basis creates a professional dilemma for me. I don’t want to appear obsessed with this mess; I’m not. I am really quite sick of it, and sick as well—and depressed—by the relentless stream of emotional, incompetent, and toxic opinions issuing from the news media, well-meaning but ignorant friends, and in some cases, professionals who appear overwhelmed by confirmation bias. One of my father’s favorite lines was “My mind’s made up, don’t confuse me with facts,” and I doubt that I have ever seen commentary on an event so dominated by that state of mind. Except, perhaps, the Trayvon Martin-George Zimmerman fiasco.

Allow me, then, to indulge in this compromise, while I wait for the entries in the Ethics Alarm contest to find the most unethical article, essay or blog post about Ferguson. Here are eleven points about the current Ethics Train Wreck that I would devote full posts to if I had the time and we lived in a Hell where Ferguson was the only thing going on. I may write full posts on a few of them yet, but meanwhile, here are shorter summaries that I hope you can use to enlighten some of your friends, relatives and associates afflicted with jerking knees….

1. We keep hearing that Officer Wilson is suspect and not credible because he expresses no remorse, and seems “cold.” This attitude projects the critics’ unjustified conclusions onto Brown, who doesn’t share them and shouldn’t. Why don’t interviewers point this out? If Brown was killed in self-defense, prompted by his own threats to the officer, Wilson shouldn’t be remorseful. Remorse means “deep regret or guilt for a wrong committed.” Wilson only did wrong if he shouldn’t have shot Brown, which is the assumption—an evidence-free assumption—of those who want him tried for murder. As for “cold”: Wilson’s whole life has been turned upside-down because a community and a substantial part of the nation have decided to make him pay the price for insensitive and poorly run police departments over decades and across the country. People are calling him a murderer based on political agendas. He’s supposed to respond to that warmly?

2. On ABC this morning, Jelani Cobb, a professor of African-American studies—and boy, are we learning a lot about the racist biases of that area of scholarship lately—pronounced the testimony of Wilson “fantastical” based on this statement: END_OF_DOCUMENT_TOKEN_TO_BE_REPLACED

Uh, guys? Do you even care what really happened any more?

He has read various critiques of his analysis and allegations, and addresses them here. Jacobson also spoke with the much quoted General Counsel of the Mass Board of Bar Overseers, and confirmed that  Michael Fredrickson was not speaking officially or on behalf of the BBO, but rather giving his personal opinion.

For my part, I am dismayed, if not shocked, that the legal establishment, as well as legal ethicists who should know better, are letting their political biases dictate their analysis. It is true that Jacobson is an openly conservative blogger as well as a long-time critic of Warren, but he raises legitimate questions that deserve to be taken at face value, whatever their source. The fact Fredrickson, the BBO General Counsel, felt it necessary to personally defend Warren in the absence of sufficient facts strongly suggests a pro-Warren bias in the disciplinary system, where it really shouldn’t matter who breaks the rules, but whether or not they have. Similarly, over at the Legal Ethics Forum, legal ethics legend Monroe Freedman comments,

“It surprises me that so much commentary has been expended on such a relatively unimportant issue, which apparently was raised in the first place to embarrass a candidate for the Senate in a race that has matters at stake that could affect the future of the country.” END_OF_DOCUMENT_TOKEN_TO_BE_REPLACED

Don’t tell me Angela Corey is unethical too! Hey…I told you not to tell me!

Here, almost in its entirety, is noted legal ethicist Monroe Freedman’s post on the The Legal Ethics Forum, regarding Special Prosecutor Angela Corey’s outrageously unethical press conference. I was going to post on this myself, but I could not improve on Prof. Freedman, which should come as no surprise to anyone familiar with his career and contributions to legal ethics theory. His title was “Trayvon Martin, Angela Corey, and Prosecutors’ Ethics.”  When I read it, the only thing I could say was “Bingo!”  From here on, it is all Monroe:

“First, her investigative team… “worked tirelessly” in a “never-ending search for the truth and a quest to always do the right thing for the right reason.”  We are “not only ministers of justice,” we are “seekers of the truth,” and we “stay true to that mission.” END_OF_DOCUMENT_TOKEN_TO_BE_REPLACED

“U.S. Attorney Fitzgerald failed to convict Blagojevich on 23 of 24 multiple counts.  But not to worry.  Fitzgerald succeeded in convicting Blagojevich, and destroying his reputation and career, three years ago with a vicious press conference — and without having to bother himself with due process and trial by jury.”

In his press conference announcing the charges against the then-Illinois governor, Fitzpatrick memorably said that Blagojevich’s conduct had Abe Lincoln “rolling in his grave.” He also said: END_OF_DOCUMENT_TOKEN_TO_BE_REPLACED

The Eleventh Circuit Court of Appeals has ruled in the case of Rehberg v. Paulk that one who sends an e-mail has no “expectation of privacy” in its content, once it is sent to a third party—-and that third party can even be the internet service provider. Which means, in essence, that e-mails aren’t private any more, if this ruling stands.

Here you have a good example of how courts can re-define formal ethical standards on multiple planes with a few words. This means that one of the most influential Federal Courts has given the green light to any government agency or employer who chooses to read your e-mails. It may well be that lawyers who send documents containing confidential client information have breached their duty to protect confidences. It means that if your room-mate reads confidential messages on your laptop without your permission, the law says its your fault, not his.

This is the point where ethics, manners and the Golden Rule becomes more important than ever. The court case may change the law, and it may be legal to read other people’s e-mails without permission, but it’s still not right.

For an excellent scholarly dissent from the Eleventh Circuit’s ruling by Prof. Orrin Kerr, see his argument on the Volokh Conspiracy.

[Many thanks to Prof. Monroe Freedman whose post at the Legal Ethics Forum alerted me to both the case and Prof. Kerr’s critique.]