Forget what your dad is telling you, kid: listen to Buddy.

I think it is fair to that we know what the standards, or rather double standards, are in Barack Obama’s America. We have repeatedly been told by progressive activists that “hate speech” either isn’t or shouldn’t be protected by the Constitution, but the essay “Letter to My Son” by a regular Atlantic contributor, published by the magazine as literature, shows that “hate speech” is a narrower category in the progressive universe than its catchy name would suggest. Pompous, pretentious, labored, and smug anti-white, anti-American speech isn’t hate, apparently, but rather wisdom.

I just want to know what the rules are now.

Blogger/law professor Ann Althouse threw a link to the long piece by Coates to her readers without comment, as is often her technique. Actually, she highlighted a comment to the essay by one of the readers of Metafilter, who gushed,

I sat in the parking lot of my gym for 30 minutes reading that amazing, amazing piece. I’m rendered inarticulate by its power, by its purpose, by how fucking important it is and how I wish every person in this country would read it and really hear what he’s saying. And, just, goddamn. It’s so good. It references MLK in the same breath as Wu-Tang, and it’s all woven together so fucking effortlessly, but the references aren’t winky nods to pop culture, they’re buttressing an argument that is already so strong and undeniable and.

Althouse left off the last line, which was…

God. I know this sounds hyperbolic, but fucking hell, I hope this letter is taught in civics classes and literature classes for decades to come.

The Professor is correct: the positive reactions to this monstrosity are at least as fascinating as the essay itself. Read it all the way through, if you can. I found the long article extremely hard to get through. The prose is the sort of over-worked, straining-to-be-poetic slog that black revolutionaries and poets of the Sixties used to excel at, often from prison; Eddie Murphy did some hilarious imitations of them. Style and pretentiousness aside, the essay is tragic, frustrating and deeply sad: if this or anything even close to this is a common state of mind among African Americans, then it is small wonder progress in U.S. race relations is regressing. END_OF_DOCUMENT_TOKEN_TO_BE_REPLACED 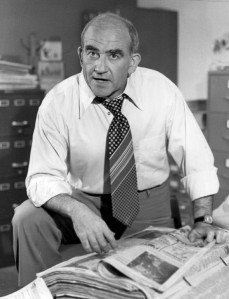 I really don’t know what to make of this, but I think it means something, and whatever it is, it’s important to remember and learn from it. Now if I could only figure out what it is.

Here is what Ed Asner, the elderly “Mary Tyler Moore Show” and “Up” actor—he was also a bad guy in one of my favorite John Wayne Westerns, “El Dorado”—said in response to an interviewer’s question about why the Hollywood anti-war left was staying out of Obama’s self-made Syria controversy, in such marked contrast to its vocal opposition to the Iraq invasion (Where have you gone Janeane Garafolo, our nation turns its lonely eyes to you…OOOOO! ).

“A lot of people don’t want to feel anti-black by being opposed to Obama.”

Now, Asner has long been a vocal member of the Hollywood liberal activist community. Presumably, he still is well-connected and knows something about the culture and political pulse in Tinseltown. So I want to know: What can we glean from this ridiculous statement? What does it mean? END_OF_DOCUMENT_TOKEN_TO_BE_REPLACED