I’m not sure where this falls on the Ethic Alarms Apology Scale.

I admit that I’m never heard of John Morgan, but I am told he is a well known attorney in Orlando, Florida, and like so many trial attorneys, a character. Morgan keeps his name before the public in part by posting self-made videos on Twitter posted ( #Johnin60secs ) videos where he gives spontaneous running commentaries on life in general in the conversational and engaging style that makes him a successful litigator. It is a clever marketing approach: I’m pretty sure it gets around Florida’s strict lawyer advertising rules. For example, in one video he described his head as being “ the size of a watermelon,” which is obviously hyperbole. In a legal advertising, a lawyer can’t me make any false or misleading statement or one that can’t be verified.

But I digress. There is a danger any time anyone, no matter how glib or accustomed to speaking off-script, does so for public consumption, as the late Rush Limbaugh, acres of crushed”shockjocks,” Michael Richards and I, among others, can attest. And so it was that Morgan, in one of his videos, was riffing on fast food franchises, and said about Arby’s,

END_OF_DOCUMENT_TOKEN_TO_BE_REPLACED

Item #2 in today’s warm-up was wrong, false, and based on bad information that was, I believe, deliberately posted by others on the web to deceive. As you can see by viewing the entire context of the report, O’Donnell and CBS did nothing unethical or misleading.  This screenshot 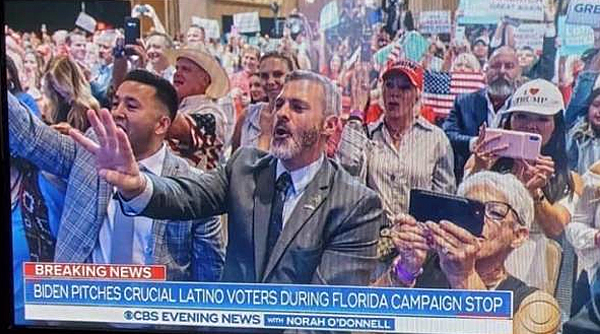 ..shows a chyron that had been up  through several video clips, and at the second the screen above appeared, the voiceover referenced Trump’s Hispanic support.

There is no way anyone who had watched the segment could have concluded that the shot was intended to fool viewers into thinking those were Biden supporters.  The claims to the contrary were deliberate disinformation, and they hooked me, in part because of confirmation bias, as I believe the news media is capable of even the most dastardly lies in their campaign to mislead the public, and in part because I didn’t think anyone would claim something this easily checked  if it wasn’t true.

Well, @AZ GOP LD 25, a ” Trump Victory Field Organizer Realtor/Owner of Tracy DuCharme Group” did: she’s a liar. Then The Last Refuge, a right wing website did, and its false story was picked up by The Citizens Free Press, the news aggregator.

Then I spread the lie further.

UDDATE! With apologies to all, I’m retracting this post. I had bad information: the entire thesis of the post is based on the false belief, which I acquired literally decades ago, that baseball union chief Marvin Miller was a lawyer. I know that a lawyer should not be celebrated for achieving the goals of his client; I’m not at all sure about my conclusions if the individual is a non-lawyer labor leader. I haven’t considered Miller in that context. I have to think about it.

I apologize to Ethics Alarms readers and also the admirers of Mr. Miller, and I hope he won’t be visiting me on Christmas Eve. One thing the web doesn’t need is more bad information, and I regret adding to it, even for a couple of hours.

Last week,  Major League Baseball’s 6-member Modern Baseball Era committee considered ten Hall of Fame candidates, previously passed over in the regular voting process, whose biggest contributions to the game came between 1970 to 1987. It elected former Detroit Tigers and Minnesota Twins starting pitcher Jack Morris and his Tiger team mate Alan Trammell, one of the very best shortstops of the era. Both were borderline choices, but Trammel was certainly deserving. Morris got over the hump because of a single memorable game, his Game 7, 10-inning, 1-0 shutout that won the 1971 World Series for Minnesota over Atlanta in of the 1991 World Series. Now that starting pitchers in the Series seldom go even 5 innings, much less ten, Morris’s performance seems especially god-like, but the fact remains that single achievements are not supposed to put players in the Cooperstown, New York Museum. Among the candidates who were rejected was my beloved Luis Tiant, the spinning, whirling, Cuban ace of the Cleveland Indians and Boston Red Sox, one of the most unique pitchers in the history of the game, and while he was active, universally considered a great player, which he was. “Looie” deserves to be in the Hall, and is in his eighties now. He should have been voted in over Morris.

But the rejected candidate that sportswriters have long been rooting for wasn’t even a player. He’s Marvin Miller, who died in 2012 and who headed the players’ union from 1966 to 1982. Under Miller’s direction, the MLB players’ union became one of the strongest unions in the United States. He is credited with leading the efforts to eliminate the Reserve Clause, which once bound players to teams until they were traded, released, or retired. When he took over the union, the top baseball salary was about $100,000 a year. Today it is about 30 million a year, and the minimum salary is over $500,000. Legendary broadcaster Red Barber once said that  Miller, “along with Babe Ruth and Jackie Robinson, is one of the two or three most important men in baseball history.”

Well, Arnold Rothstein, Barry Bonds and the inventor of anabolic steroids had immense impact on baseball too. END_OF_DOCUMENT_TOKEN_TO_BE_REPLACED

I’m retracting this post in record time, thanks in great part to commenter CB, who wrote,

Not an Obama fan here by any means BUT, you need to watch the video. He was NOT flashing the peace sign…he held up two fingers as he clearly said, ““We just have two more folks we’re waiting on.
There are so many serious things to be upset with Obama about….we don’t have to make stuff up. http://conservativefiringline.com/did-obama-flash-peace-sign-at-nuclear-summit/

I didn’t see the video, because I didn’t know there was one. The following sources are among those who intentionally misled its readers to take a cheap shot at the President: Instapundit, Drudge Report, Daily Mail, Times of Israel, NY Daily News, Biz Pac Review, and more conservative blogs and radio shows than I can count, largely because of Drudge and Instapundit.

I’m disgusted with all of them, and furious, in part at myself, that I was taken in. The “peace sign” was obviously a “two,” it lasted a second, and was not intended for the cameras.

As for me, I was taken in by my own confirmation bias, because bias makes us stupid. Obama is a narcissist, and this seemed like just a credible escalation of  behavior we already knew he was capable of engaging in, and if he did this in fact, I would not be surprised. It was obvious from the video, however, that he did NOT do it, and news media that reported otherwise were either malicious or incompetent.

I apologize to Ethics Alarms readers, and the President.

There is apparently a diabolical law regarding Ethics Alarms that the more trivial a subject is, the more likely I will screw it up, or it will be a hoax, or something else. The previous post, chiding GEICO for allowing the lyrics of “You Make Me Feel So Young” to be massacred by Peter Pan in its current TV ad is an epic example.

First, I posted a video of Sinatra singing the song as an example of the right way. It is hard to find a video of anyone BUT Sinatra singing it, for he made it one of his standards. Then LoSonnambulo, a frequent commenter here, properly chides me for using a crooner who regularly changed lyrics as the paragon of lyrical certitude. Yes, that’s pretty stupid. Thus I resolve to change the embedded video, and what do I find? I find that the non-English, slangy abomination, “You make me feel so young, You make me feel so spring has sprung” did not originate with GEICO, or Peter Pan, but Frank Sinatra, who sang the polluted lyric in the earliest recording I could find. It appears to be his invention.

It gets worse. Because Frank sung it like that, everybody started doing it: Ella Fitzgerald, Rosemary Clooney, Jack Jones, everybody.  It’s the wrong lyric, damn it!

But I can hardly blame GEICO for not fixing the version in its ad when most who are familiar with the Sinatra version think those are the lyrics.

You make me feel so young,

You make me feel so “Spring has sprung!”

In Frank’s version, “Spring has sprung” is presented as a synonym for “young,” as it replaces “young.” In the original, “You make me feel as though Spring has sprung” is a related but separate thought, as it should be, because feeling young and feeling like it’s Spring are not the same thing. If they were, then so would make lyrical sense. For example, if I write the a song that goes,

You make me feel so old,

You make me feel so Spanish gold…

That works, because Spanish gold is old. But Spring springing isn’t young. It’s a bad lyric change. It makes the song worse.

Nonetheless, I suppose that a singer who didn’t know the real lyrics, and maybe even a listener, would hear the song as making sense, sort of.

Maybe I can get back to sleep now.