I saw this coming. Didn’t you see this coming? Once colleges were told that they could and should treat college athletes as professional athletes, any effort to ensure that they might leave college able to do anything but run, throw, and dunk was on the way out. And so it is.

Last week, an NCAA task force recommended that incoming freshmen in Division I and II sports should no longer be required to meet minimum scores on standardized tests for initial eligibility.

Do you realize how ignorant you have to be to fail to meet the minimum scores?

The Division I Committee on Academics and Division II Academic Requirements Committee will consider the recommendation at their next scheduled meetings in February. “This work reflects the NCAA’s commitment to continually reviewing our academic standards based on the best available data and other relevant information,” task force chairman David Wilson, president at Morgan State, said in a press release. “We are observing a national trend in NCAA member schools moving away from requiring standardized test scores for admissions purposes and this recommendation for athletics eligibility aligns directly with that movement.”

Everybody’s doing it! Now there’s a good reason for abandoning higher education for athletes! The ball started rolling in July 2020, when the National Association of Basketball Coaches called for the NCAA to permanently eliminate standardized test scores from eligibility requirements. Naturally, the main concern of basketball coaches is the educational achievements of student players.

“The days of colleges requiring the SAT or ACT are passing rapidly: more than half of all four-year colleges and universities will not require these tests for admissions in 2021, and more are dropping the requirement every week,” the NABC said in a statement at the time. “These tests should no longer be required in the initial-eligibility standards. The tests are again being recognized as forces of institutional racism, which is consistent with their history, and they should be jettisoned for that reason alone; moreover, pragmatics also support this change.”

Writes education blogger Joanne Jacobs, “So the plan is to admit unprepared students who will play football or basketball and leave college without a degree.”

Exactly. After all, a thuggish Minnesota cop accidentally killed a lifetime black hood without any racial motive, so this is a perfect response. And I am Marie of Romania.

END_OF_DOCUMENT_TOKEN_TO_BE_REPLACED 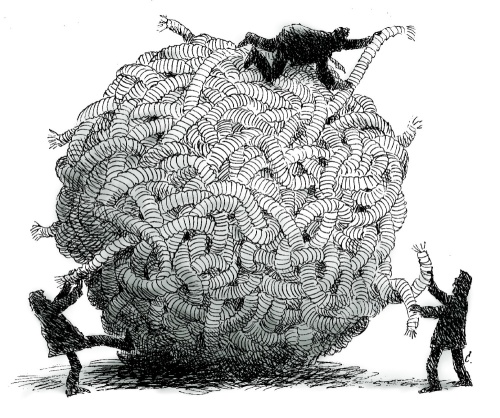 The question raises the ethical implications to all American citizens and our shared obligation to our nation and its society of a disastrous, crippling problem that poisons our culture. and society: the persistent plight of Black America.

Back when I was a senior in college majoring in American Government and the U.S. Presidency, I took a course  from Professor Thomas Pettigrew, then as now one of the foremost scholars on race, prejudice and public policy. It was about the challenges facing blacks as they tried then to benefit from new legislation and opportunities created by the Civil Rights Act and other policies, such as school busing. I was very impressed by Pettigrew’s even-handed, objective and non-political approach, even though, at my college, political teaching was the rule, not the exception.

I have never left a course so discouraged. Pettigrew, himself a pretty optimistic man, led us into one dead-end after another: black families, education, neighborhoods, political behavior, crime and more, all dysfunctional or suffering. All areas of black society interfered with or blocked improvements, progress, remedies and policy initiatives that showed promise to address racial inequality in other areas.

Late in the course I asked him if he saw any hope that in 50 years, black America would be approaching parity with white America. “I have hope,” he said. “But I honestly don’t see how we get there from here. There is a path, but we haven’t found it.”

It appears that my discouragement then was an accurate reading of the problems ahead.

Last week, these charts from the Brookings Institution’s Social Mobility Memos blog were posted to the web by other sources. They show how deeply the problems I was warned about have failed to improve in 50 years. Here is what they show:

1. Upward mobility is much more unlikely  for black than white Americans. 51% of the black Americans born into the lowest fifth of the earnings distribution remain there at age 40:

END_OF_DOCUMENT_TOKEN_TO_BE_REPLACED

The post generating texagg04‘s (latest) Comment of the Day dealt with the tricky and common ethics problem of enforcing reasonable rules strictly in the face of situations where compassion and sympathy pull us toward leniency, because the penalty for non-compliance seem out of proportion to the transgression. He correctly identified this as a problem involving the Ethics Incompleteness Theorem (or Principle), which is an ethics analysis concept used frequently here, and one of my favorites. The Theorem, as stated in the Ethics Alarms Concepts and Special Tools, a.k.a. “the Rule Book,” holds that…

The human language is not sufficiently precise to define a rule that will work in every instance. There are always anomalies on the periphery of every normative system, no matter how sound or well articulated. If one responds to an anomaly by trying to amend the rule or system to accommodate it, the integrity of the rule or system is disturbed, and perhaps ruined. Yet if one stubbornly applies the rule or system without amendment to the anomaly anyway, one may reach an absurd conclusion or an unjust result. The Ethics Incompleteness Principle suggests that when a system or rule doesn’t seem to work well when applied to an unexpected or unusual situation, the wise response is to abandon the system or rule—in that one anomalous case only— and use  basic ethics principles and analysis to find the best solution. Then return to the system and rules as they were, without altering them to make the treatment of the anomalous situation “consistent.”

No system or rule is going to work equally well with every possible scenario, which is why committing to a single ethical system is folly, and why it is important to keep basic ethical values in mind in case a pre-determined formula for determining what is right breaks down.

Tex expands the discussion into such areas as test scores, speed limits, and rule-making itself.  Here is his masterful Comment of the Day on the post, The Eternal Ethics Conflict: Drawing Lines, Enforcing Them:
END_OF_DOCUMENT_TOKEN_TO_BE_REPLACED

In Worcester, Mass, test scores at the Goddard School of Science and Technology have been tossed out because  school staff “reviewed student work on the assessment, coached students to add to their responses, scribed answers or portions of answers that were not worded by students, and provided scrap paper for students to use during tests,” according to the state commissioner of Elementary and Secondary Education.

School Superintendent Melissa Dillon wanted to make sure these findings weren’t misunderstood, and wanted to make certain nobody got the idea that her teachers were cheating. “The state did not use the term cheating, so I’m not using the term cheating,” she said. School Committee members agreed. “Calling it cheating I think is a little harsh,” committee member Jack L. Foley said.  He described the problem as “probably too much coaching.” END_OF_DOCUMENT_TOKEN_TO_BE_REPLACED

In a perceptive essay for the Chronicle of Higher Education entitled “Slip-Sliding Away, Down the Ethical Slope”, Robert J. Sternberg suggests that the educational system is contributing to society’s increasing ethical weaknesses by adopting misplaced priorities. He writes:

“Schools need to teach students the steps involved in ethical behavior and the challenges of executing them. And they need to do so with real-life case studies relevant to the students’ lives. The steps toward ethical behavior are not ones that students can internalize by memorization, but only through active experiential learning with personally relevant examples. END_OF_DOCUMENT_TOKEN_TO_BE_REPLACED