Composer and musician Bright Sheng, is the Chinese-born Leonard Bernstein Distinguished University Professor of Composition at the University of Michigan. When he received a MacArthur “genius” fellowship in 2001, the Foundation described him as “an innovative composer whose skillful orchestrations bridge East and West, lyrical and dissonant styles, and historical and contemporary themes to create compositions that resonate with audiences around the world.”

Sheng screened the 1965 film version of Shakespeare’s “Othello” in his class as part of a lesson about how the tragedy was adapted for the opera. It stars the late Sir Laurence Olivier, widely regarded as the greatest living English actor of his day and a definitive interpreter of Shakespeare, as the tragic hero Othello, a Moor. Some students who saw the film—hell, maybe all of them: they’ve all been indoctrinated into knee-jerk progressive conformity– were upset that Olivier’s face was covered in black make-up, though he was white and the character he was playing is black, so such a disguise would seem to be obligatory. This is the function of what actors call “make-up.”

Students complained to the administration that Olivier’s make-up made them feel “unsafe.” Unsafe from what? From the make-up? From Olivier, who is long-dead? From Iago, the white villain of the play?

END_OF_DOCUMENT_TOKEN_TO_BE_REPLACED

As 2020 staggers to a conclusion, Ethics Alarms wants to express its gratitude to the core of devoted Alarmist commentators who kept the dialogue going during what is always an annual cratering of blog traffic. I appreciate it. I also appreciated the many kind holiday wishes, in what has been a muted Christmas for the Marshalls for a number of reasons I won’t bore you with.

In case you were among the missing, I draw your attention to…

…among other hopefully edifying and entertaining posts.

1. After signalling otherwise or perhaps just trolling, President Trump signed the truly awful pandemic relief and omnibus spending bill, really sending the national debt into orbit. One theory is that doing so was necessary to avoid a Democratic sweep of the two Senate seats up for grabs in Georgia. I will file the event as one more car on the Wuhan Virus Ethics Train Wreck, and one that will do more damage in the long run than most of them.

2. In Nevada, Gabrielle Clark filed a federal lawsuit against her son’s charter school last week for refusing to let him opt out of a mandatory class that promotes anti-white racism. It claims that Democracy Prep at the Agassi Campus forced William Clark “to make professions about his racial, sexual, gender and religious identities in verbal class exercises and in graded, written homework assignments,” creating a hostile environment, and subjecting he son’s statements ” to the scrutiny, interrogation and derogatory labeling of students, teachers and school administrators,” who are “still are coercing him to accept and affirm politicized and discriminatory principles and statements that he cannot in conscience affirm.” The lawsuit includes nearly 150 pages of exhibits documenting the curriculum in the graduation requirement “Sociology of Change,” which promotes intersectionality and critical race theory, in breach of what was promised when the Clark’s first sent their son to the school.

END_OF_DOCUMENT_TOKEN_TO_BE_REPLACED

Judges have been taking an ethics  bashing here recently, so I feel it’s only fair to report that the three-member U.S. Court of Appeals for the Sixth Circuit, in a 2-to-1 decision, determined that the University of Michigan’ speech police, known there as its Bias Response Team, chilled free speech on campus and thus violates the First Amendment.  The Team’s function is to investigate incidents reported by students that are deemed racist, sexist, hostile to LGBTQ students or otherwise “offensive” to the right groups of people. For example, if I were a student there, the creation of such an entity would be profoundly offensive to me.  That presumably wouldn’t matter.

Speech First, a Washington, D.C.-based civil liberties watchdog, sued Michigan last year, seeking an injunction to halt the activities of the BRT. The lawsuit argued that the Bias Response Team is illegal because it could potentially deter students from making statements or engaging in conduct that some on campus might find offensive but are still protected under the First Amendment. The university’s definitions of “harassment” and “bullying” were ominously broad, though Michigan did refine them after the suit was filed. The looming presence of a speech and conduct response team that could be focused on a non-conforming student by a single complaint could reasonably be expected to make students hesitate to express themselves.

Ya think? Nonetheless, a U.S. District Court judge initially denied the injunction last year. [Note: Here I have deleted a series of comments about the agenda and political affiliation of this judge and those who reason like him. I am trying to practice more self-restraint, today anyway.] END_OF_DOCUMENT_TOKEN_TO_BE_REPLACED

Is anybody out there?

1. What’s going on here? The AP deleted a tweet on September 5 tweet attributing the murders of Israeli athletes  to undefined “guerrillas.” Someone complained: it then tweeted, “The AP has deleted a tweet about the massacre at the 1972 Munich Olympics because it was unclear about who was responsible for the killings and referred to the attackers as guerrillas. A new tweet will be sent shortly.” Finally, this was the tweet decided upon:

“On Sept. 5, 1972, the Palestinian group Black September attacked the Israeli Olympic delegation at the Munich Games, killing 11 Israelis and a police officer. German forces killed five of the gunmen.”

2. Wait: ARE there really “AI ethicists,” or just unethical ethicists grabbing a new niche by claiming that they are any more qualified for this topic than anyone else?

After a rash of tech employee protests, the Defense Department wants to hire an artificial intelligence ethicist. “We are going to bring on someone who has a deep background in ethics,” tag-teaming with DOD lawyers to make sure AI can be “baked in,” Lt. Gen. Jack Shanahan, who leads the Joint Artificial Intelligence Center, told reporters during an Aug. 30 media briefing.

The AI ethical advisor would sit under the JAIC, the Pentagon’s strategic nexus for AI projects and plans, to help shape the organization’s approach to incorporating AI capabilities in the future. The announcement follows protests by Google and Microsoft employees concerned about how the technology would be used — particularly in lethal systems — and questioning whether major tech companies should do business with DOD.

I’m hoping that the Defense Department isn’t doing this, as the article implies, because some pacifist, anti-national defense techies at Microsoft complained. [Pointer: Tom Fuller]

3. Campus totalitarians gonna totalitary!  University of Michigan students and alumni aare demanding that the University to sever ties with real estate developer Stephen M. Ross , who is the largest donor in the University’s history. This would presumably include removing his name from  Ross School of Business, which he substantially funded. (His name is on other buildings as well) Did Ross rape women willy-nilly? Has he been shown to be racist? No, he held  a re-election fundraiser for the President of the United States. END_OF_DOCUMENT_TOKEN_TO_BE_REPLACED

“You better be telling the truth, or this is coming right back at you…”

Especially now that the Obama administration has demanded that colleges strip away the basic rights of students accused of rape, the practice of not releasing a false accuser’s name to the media must end.

The compelled switch to a “predominance of the evidence” standard in such cases has led to too many false charges, too many wrongly punished male students, and too many scarred lives. High profile national leaders like Hillary Clinton are undeterred in supporting this power play by feminists, and university officials apparently don’t have sufficient regard for fairness or even basic logic: the Department of Education threatened their income stream, so if a few male students get railroaded out of school and haunted for a lifetime with the stigma of being a rapist, the college leaders consider it a necessary sacrifice to the greater good.

It is only one case, but if the facts of the University of Michigan’s persecution of student Drew Sterrett are as they appear to be, this is signature significance: one incident this irrational  proves that campus sexual assault  hysteria has turned into a genuine, bona fide witch hunt, with the metaphor appropriate for once. There must be accountability, and the Obama Administration, the schools, their administrators, irresponsible leaders like Clinton, Sen. Kirsten Gillibrand and Rep. Jared Polis, and, yes, sorry, false accusers must share it.

Sterrett was forced to leave the University of Michigan in 2012 during his sophomore year, after a female’s student’s accusation of forced sexual intercourse was upheld under circumstances that would have made a kangaroo court, with real kangaroos, an improvement. He sued the university in federal court, arguing that  his 14th Amendment rights to due process had been violated. The only possible response to his claim, once one reads the account published in Slate, is “Ya think?” It is disturbing that anyone should have to sue to get such treatment recognized as outrageous. Apparently no one at the University of Michigan who has power possesses any ethical twitches whatsoever, while nobody with a passing knowledge of right and wrong has any power. 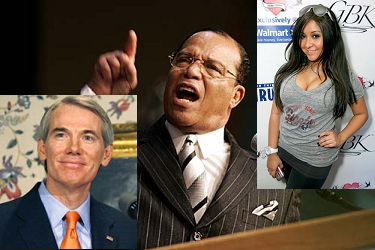 Your Ethic Quiz question for the weekend: Which of these is the most unethical choice to speak at a University?