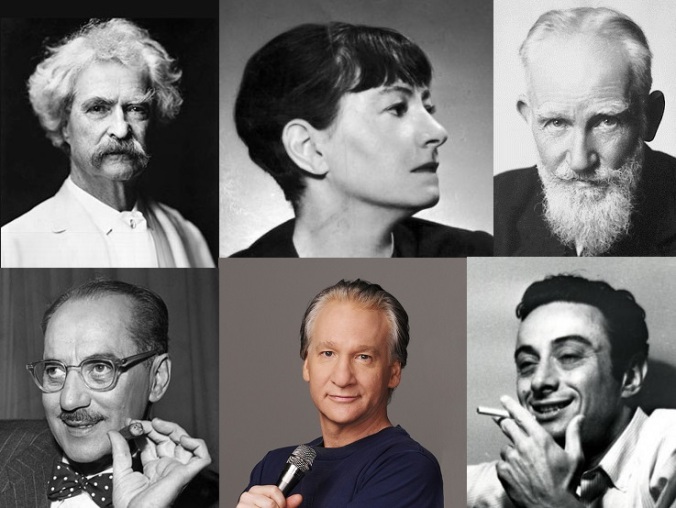 “One of these things is not like the other…”

The Bill Maher Ethics Conundrum is not what you probably think it is.

Maher, the alleged comic and anti-conservative scold who hosts an HBO program, was chosen by a student committee to be the  commencement speaker for the University of California-Berkeley’s December graduation. This was a lazy, embarrassingly juvenile and politically-loaded selection, but Maher had also just recently used his show to join fellow atheist and neuroscientist Sam Harris in a condemnation of Islam, calling it  “the only religion that acts like the mafia that will fucking kill you if you say the wrong thing, draw the wrong picture or write the wrong book.” Later on Maher nodded approvingly  as Harris also called Islam”the mother lode of bad ideas.”

This caused Muslim students at Berkeley to prove Maher correct about their religion’s entrenched intolerance of opposition, and they have been joined by other political correctness censors in the student body—there are a lot of them—to demand that the university rescind Maher’s invitation because of his “hate speech.”A  Change.org petition—-now THAT site is the real mother lode of bad ideas—now urges students to boycott the decision and asks the campus to stop him from speaking. It has gathered more than 1,400 signatures. The committee that chose Maher, naturally, backed down, but the University, so far at least, is sticking to its decision to invite him.

Yes, yes, universities ought to be marketplaces of ideas where all views are welcome, and yes, it is hypocritical and offends the traditions of liberal education to stop Maher from stating his views on Islam, or re-telling “The Aristocrats,” or making a fool of himself, or whatever he’s going to do because some students or all students disagree with him, just as it was for Rutgers students to force Condolezza Rice into withdrawing after she was invited to speak at Rutgers. The dilemma illustrated by this flap is a classic ethics problem, which I will henceforth call the Bill Maher Conundrum, which has been long debated and never decisively settled:

Is the ethical nature of an act defined by its intent, or by an objective assessment of the act alone without reference to motive? END_OF_DOCUMENT_TOKEN_TO_BE_REPLACED

Here is a helpful Comment of the Day from Rich Page, providing important perspective to the issue of marathoning and marathoners. I am especially grateful for comments like these, which add leavening to posts that can be a little more jarring than I intend, even though I know exactly how they will be taken when I post them.

I didn’t want to get too deep into all the many reasons people run, so what was intended as an observation about many marathon and running enthusiasts could have been taken as a knock on running for fun, for example. Fun is important; fun is natural; fun is grand. I think fun is a wonderful reason to do anything. I do a lot of things just for fun, and always have—luckily, I find my various jobs fun, all of them.

Rich’s post balances mine perfectly, and makes it whole and better. As to the timing—I agree, I wish I could have “hung it on a different hook,” and perhaps I should have waited for another one, since I have been waiting a while as it is.Perhaps my rule should be that if I can’t conceive of any graphic or photo that won’t risk being offensive to a lot of readers, that’s a strong indication that I should postpone the topic to another day.

This is the Comment of the Day on “Annoying and Ill-Timed Tangential Issue Dept.: There’s Nothing Especially Virtuous About Running A Marathon”: END_OF_DOCUMENT_TOKEN_TO_BE_REPLACED

I sincerely apologize for the timing of this topic, which has actually been percolating in my brain for a while. I first considered it after finding myself annoyed by a commercial running on television of late, comparing various artists who completed major works after their 55th birthdays with a similarly aged woman who recently ran a marathon. Then, yesterday, in the wake of the terrorist attack on my home town, I read multiple Facebook posts from otherwise intelligent people expressing profound sadness for all the marathoners who trained so hard for Boston and were not able to finish. That did it.

I believe we can stipulate, can we not,  that any marathoner who returned home whole after watching fellow competitors having their arms and legs blown off  and complained that the race was terminated before he could finish would immediately be eligible for the Jerk Hall of Fame. If horror, grief and empathy for the victims, concern for the nation, and gratitude for the pure luck of being spared doesn’t wash such selfish thoughts right out of a runner’s mind, then that person needs to keep on running until he has left civilization. Meanwhile, the increasingly accepted cultural attitude that running a marathon or an iron man competition is especially admirable shows something is out of whack in our value system.

I didn’t feel like confronting my Facebook friends yesterday, but please tell me how being prevented from running in a race one has trained for is any more of a tragedy than a thousand other minor disappointments we all face every day, and far less worthy of sympathy than thousands of others. A while back I was blocked from giving a seminar in Tennessee that I had prepared for, because of a storm that grounded all usable flights. That cost my company $5,000. It meant that a lot of Tennessee lawyers had to hustle to find other ways to get their ethics credit, and the ways they found were going to be a lot more boring than I am. Those are real consequences, tangible and significant. What is the result of not being able to finish the Boston Marathon? Who is significantly harmed? Nobody. The marathoner is disappointed and inconvenienced, that’s all. There are other races. He or she is in shape, They did the best they could. The Marathon will be held next year. The terrorist attack is a tragedy. The fact that racers couldn’t cross the finish line is trivial. It just doesn’t matter very much, or shouldn’t.

I’m not condemning runners, any more than I condemn people who spend their spare cash on jewelry, summer houses and vacations instead of saving the whales: it’s their lives and and their priorities, not mine, and they can do what they choose. At the same time, the aura of virtue surrounding extreme runners and the popular myth that running a marathon is more ennobling than commonplace altruistic and practical uses of an individual’s time is bizarre. That commercial I mentioned speaks of being productive in latter years. Running a marathon doesn’t produce anything more than playing a videogame does. Picasso, whose late career artwork is mentioned in the spot, created something beautiful that will be enjoyed for centuries: now that’s productive, and also worthy of admiration and praise. Whose life is enriched by the completion of a marathon, other than the runner’s? It isn’t a communal act, a generous act, a productive, charitable, creative or selfless act. It is a completely self-absorbed and self-focused act, requiring many hours that could just as easily be used communally, generously, productively, charitably, creatively and selflessly. Again, it’s the runner’s life, and if he or she wants to use their brief time on earth to complete manufactured and artificial challenges that accomplish nothing tangible and leave the world no better than it was before, that’s an individual choice; running a marathon doesn’t harm anyone, either, unless it interferes with being a good and attentive father, spouse, and friend. Extolling this kind of activity, however, just distorts societal values, and bestows heroic status on the wrong people, for the wrong things.

The American Academy of Pediatrics slipped on the slipperiest of ethical slopes when earlier this year it attempted to balance multi-culturalism with pragmatism and traditional medical ethics. The topic was the genital mutilation of young girls in a form of (so-called) “female circumcision” practiced by some Muslims, in which the clitoris is cut and mutilated in order to make future sexual activity less enjoyable, thus ensuring a female’s “virtue.” The AAP argued that its members could ethically agree to inflict a lesser “nick”—a ritual drawing of blood— to fulfill a patient’s parents’ request for the ritual cutting, because to do otherwise might lead to greater harm to a girl’s genitalia if the parents sought a full-fledged mutilation abroad or elsewhere.

This policy effectively repealed the ancient ethical standard of “First, do no harm” by employing the versatile rationalization, “If I don’t do it, someone else will.” Predictably, women’s rights advocates were horrified. Equality Now proclaimed in May… END_OF_DOCUMENT_TOKEN_TO_BE_REPLACED

“Maybe there’s only one revolution, since the beginning, the good guys against the bad guys. Question is…who are the good guys?”

—Bill Dolworth (Burt Lancaster) in the 1966 Western “The Professionals,” script by Richard Brooks, from the novel by Frank O’Roarke. He is responding to a question from the horse wrangler played by Robert Ryan, who asks why Dolworth and other Americans had fought in the Mexican revolution.

Lancaster’s casual reflection turns out to be significant, because the whole movie hinges on the problems arising from mistaking good guys for bad guys and vice versa. In ethics and in life, it is useful to remember that the people we think are wrong, misguided, ill-motivated, irresponsible and unethical often think the same of us, and might even be right. Even more disturbing is the possibility, always present, that an individual we admire, follow and look to for guidance and inspiration may be one of “the bad guys.”