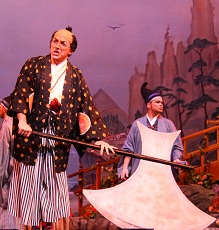 For a text-book example of how political correctness, ideology, ignorance and a humor deficit can undermine speech, culture and entertainment, we need look no further than Montana, and its public critics of the Missoula Community Theater’s production of “The Mikado,” perhaps the best of all Gilbert and Sullivan operettas and one of the very best musical comedies ever written.

The show is a free-wheeling satire of British society and politics as well as human foibles generally, supported by W. S. Gilbert’s peculiar brand of whimsical humor mixed with acid, and Sullivan’s marvelous melodies. Its comic hero is Ko-Ko, an executioner who can never quite manage the courage to actually behead anyone, though he talks a good game, notably in his famous patter song, “I’ve Got A Little List.” Ko-Ko runs down his list (typically a gag scroll that unwinds to six feet or more) of “society offenders who might well be underground and who never would be missed.” Ko-Ko’s list includes broad types ( “all people who have flabby hands and irritating laughs”) for two verses, then usually concludes with a burst of “statesmen” who originally included direct references, by manner or quotation, to political characters of the day. Gilbert specifically authorized updating this section to include controversial political celebrities from other times and places. Whoever did the updating for the Missoula Community Theater included Sarah Palin here, as Gilbert would have, I am quite sure. (And so would I: I’ve played Ko-Ko three times, including in high school, and written the political updates for Ko-Ko’s song for over a dozen productions.) The insults in Ko-Ko’s song are quite apolitical; for example, one of the people on his list is exactly the type Ms. Palin would deride herself:

“…the idiot who praises with enthusiastic tone

All centuries but this and every country but his own…”

Nonetheless, several audience members rose to Palin’s defense against the mild barbs of a Victorian era faux-Japanese fictional town executioner who has approximately the same gravitas as Daffy Duck. One, an outraged Rory Page, wrote The Missoulian:

“…Now, I realize you play to a mostly liberal audience in Missoula and so, I am sure, felt comfortable in your calling for the beheading of Sarah Palin. I am painfully aware that most in the audience tittered with laughter and clapped because “no one would miss her” but there were some in your audience who took great offense to this “uncivil tone” about another human being.

We are in the midst of a crisis that took place in Tucson where many started pointing fingers at that horrible right wing with all their hatred and targeting and standing for the second amendment and on and on and on. So, here we are in a lovely play with beautiful voices serenading us and we have to hear that it is okay to call for the killing of Sarah Palin because we don’t like her and no one would miss her. Unbelievable.

“As a professional you should be ashamed of yourself, the audience should be ashamed of themselves and I am ashamed of myself for not standing up and leaving at that very moment. I would like to see an apology from you not because I want to hinder free-speech but for the hypocrisy this so clearly shows.”

Here we have it all: complete ignorance of the historical and cultural context of a few lines in a song, misapplied to a political satire in which violence is used with the levity of a Roadrunner cartoon, connected without logic or perspective to an event, the shooting in Tucson, as far removed from Gilbert and Sullivan, the Town of Titipu, and Nanki-Poo (the wandering minstrel who is really the crown prince of Japan engaged to Katisha, who has a horrible face but a left elbow that people come miles to gaze at) as the shooting in Tucson was removed from, well, Sarah Palin, by someone who doesn’t understand satire, the humor of W.S. Gilbert, or the definition of civility, culminating in a clueless Palin fan demanding an apology for a faithful production of a 19th Century British operetta. And, if the Missoula Community Theatre is as conflict averse as most arts groups, he’ll probably get it, when in truth it should be Rory who apologizes to us.*

It is the efforts of Rory and people like him who want to suppress any joke, humor, image, comparison, barb or criticism that targets a figure, cause or belief they support that is part of the bi-partisan, multi-faith conspiracy to impose soft censorship on this country, gradually including the best of our literature, like “Huckleberry Finn”, and our stage shows, like “The Mikado.” They are so righteous that reality and common sense make no dent in their indignation: Rory, for example, calls “The Mikado” a “lovely show,” apparently not noticing that this lovely show, as written, is about looming decapitations, boiling in oil (or melted lead), threatened suicide by hanging or stabbing, with characters who are, without exception, either dim-witted, cowardly, blood-thirsty, vain, corrupt or certifiably insane…just like most of America’s politicians.**

Which, of course, was Gilbert’s point. I’m sure Rory didn’t hear them, because she was sputtering with outrage and already composing his angry (and silly) letter, but Ko-Ko’s words at the end of “I’ve Got A Little List” explain it well:

For it really doesn’t matter whom you place upon the list,

For they’d none of them be missed.

They’d none of them be missed!

I’m filling in the blanks in my list now, and I’m pretty sure Rory won’t like this version, either.

* Sadly, I was right: the Missoula Community Theatre pulled the lyric about Sarah Palin because of a few humorless Palin fans. Gilbert, in contrast, never backed down, even when those offended by his barbs included Queen Victoria and the nations of Japan and France. The Theatre, I am told, is in a bind—it is connected to its Children’s Theatre, and fears losing support and funding. The lesson: Don’t stir up P.C. bullies if you can’t or won’t stand up to them, because you just add to their power.

** Well after this was written, I learned from a reliable source what the Palin lyric was. It came in a different part of the song than where Gilbert put his political “victims,” and went like this:

I’m not impressed with the lyric, especially: Gilbert would be subtler than calling a political figure “crazy,” but never mind: this is in keeping with the song’s traditions, and the lyric says she needs a shrink. It does not call for her death, as Rory’s letter claimed.

Note: Other posts on this matter can be found here,  here, and especially here.

30 thoughts on “Next: A Version of “The Mikado” Without Execution References”